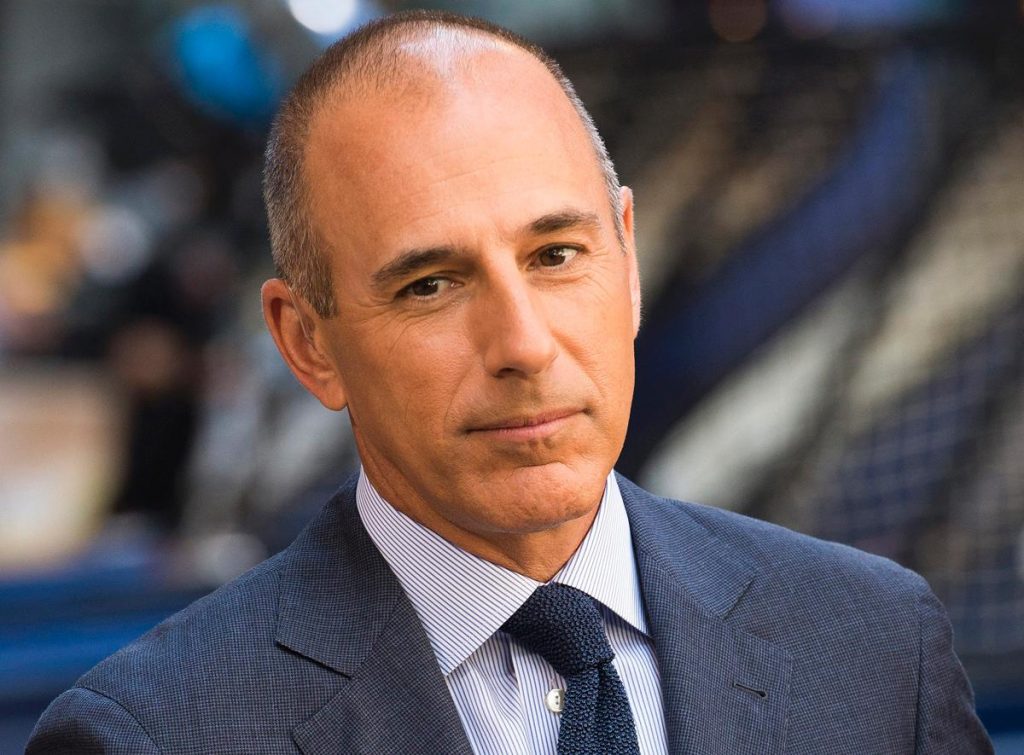 Matt Lauer has been terminated from NBC News. On Monday night, we received a detailed complaint from a colleague about inappropriate sexual behavior in the workplace by Matt Lauer. As a result, we’ve decided to terminate his employment. pic.twitter.com/1A3UAZpvPb

As the day played out, more women told their own stories of abuse and discomfort in dealing with Lauer.

Rival ABC News challenged statements by NBC execs claiming they didn’t know anything about Lauer’s workplace misdeeds. Some former NBC employees say that the TODAY show was a “boy’s club” that centered around Lauer and that anchors Savannah Guthrie and Hoda Kotb feigned shock in announcing Lauer’s firing on air.

Accounts of a 2008 NYC Friar’s Roast of Matt Lauer clearly indicate that NBC execs were fully aware of their morning star’s sexcapades. A Village Voice columnist crudely recapped the night as “three hours of dick jokes.” 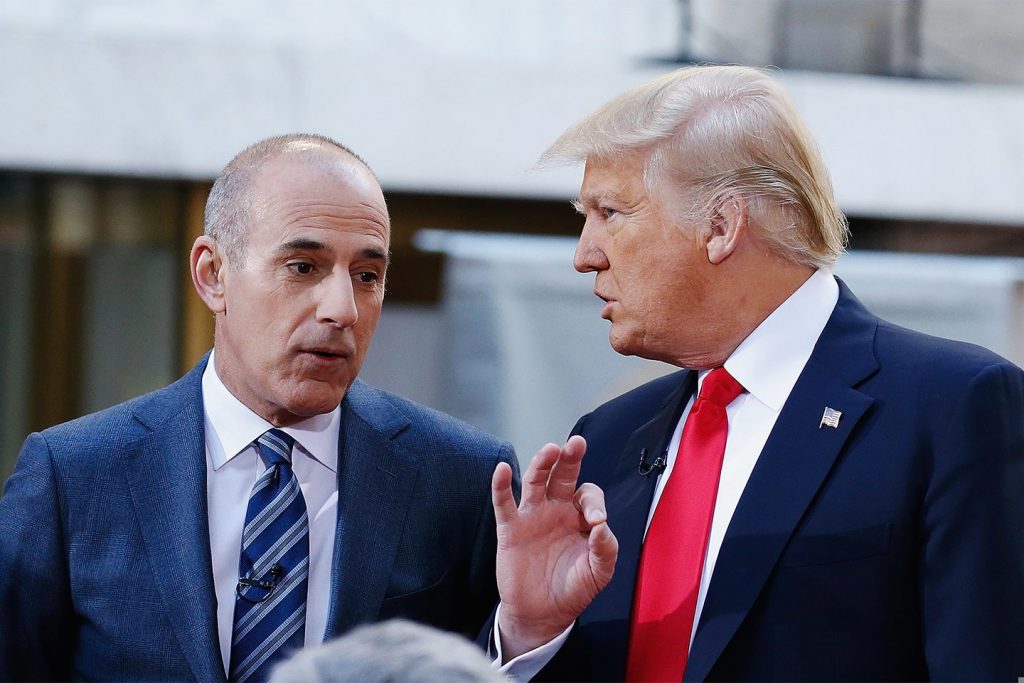 Wow, Matt Lauer was just fired from NBC for “inappropriate sexual behavior in the workplace.” But when will the top executives at NBC & Comcast be fired for putting out so much Fake News. Check out Andy Lack’s past!

During Lauer’s tenure there had been personal controversies, tension with female co-hosts, including the awkward removal of beloved anchor Ann Curry, and a rumored affair with former news anchor Natalie Morales. Both Morales and Lauer have denied the allegations. Media couldn’t stop reporting on the alleged affair as Morales was shipped out west to host the fluff-filled NBC show Access Hollywood.

In spite of multiple reports by the New York Times, Variety, and the New York Post detailing abuse stories by many women, NBC News has yet to offer more details about Lauer’s firing or the identity of the original accuser. NBC received a thorough complaint from that co-worker on Monday and investigated all day Tuesday before deciding late that night to fire the network’s longest serving primary news anchor.

Lauer allegedly sent lewd texts and propositioned an intern who accompanied the network crew to the 2014 Olympics in Sochi.

The New York Times shared more graphic details of another Lauer co-worker’s account of her assault in his office, which is equipped with a button on his desk that automatically locks the door. 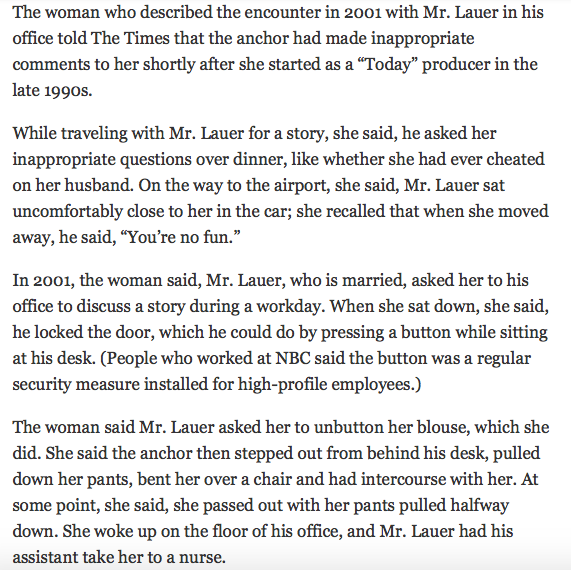 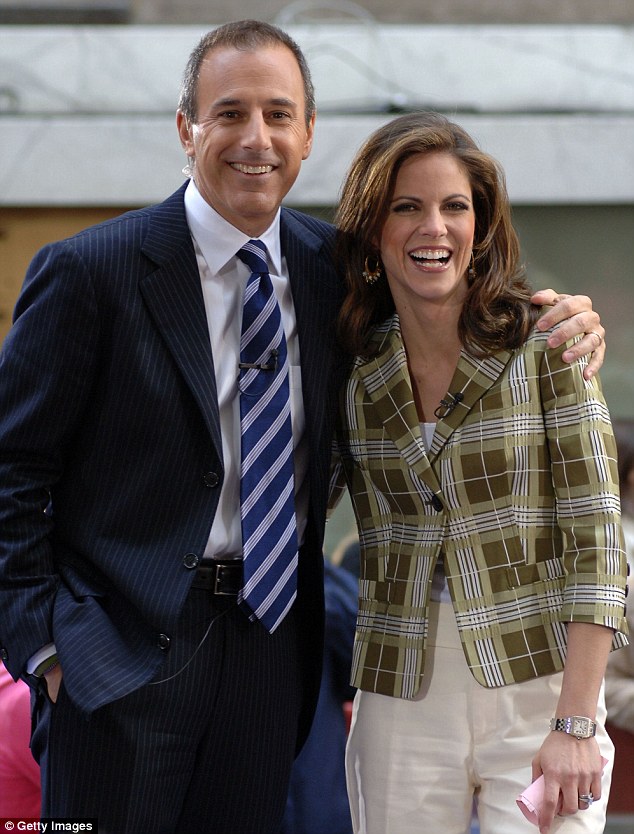 Matt Lauer grilled former Fox News anchor Bill O’Reilly on TODAY in September, asking many questions that other media people would love to ask of him.

Will NBC’s signature comedy sketch show Saturday Night Live skewer Matt Lauer on this weekend’s new episode? The show has been brutal to conservatives like O’Reily who, like Lauer, was fired for sexual harassment in the workplace.

Democrat Al Franken, a former SNL cast member, was given one passing shot on the show.

Hillary Clinton gave a hazy reply when asked if she would return millions her family campaigns have accepted from Weinstein.

One archived video the network is sure to scrub from its site is a 2012 parody of various NBC male employees sexually harassing each other. A panel of NBC men and women then join in to laugh about the sketch. Actor Dustin Hoffman, another prominent sexual harasser, ends the segment by making a joke about a news anchor “showing his willie.”

Throwback to 2012 when Matt Lauer was the “real victim” of sexual harassment on the Today show ? pic.twitter.com/mYdnhEV2wv