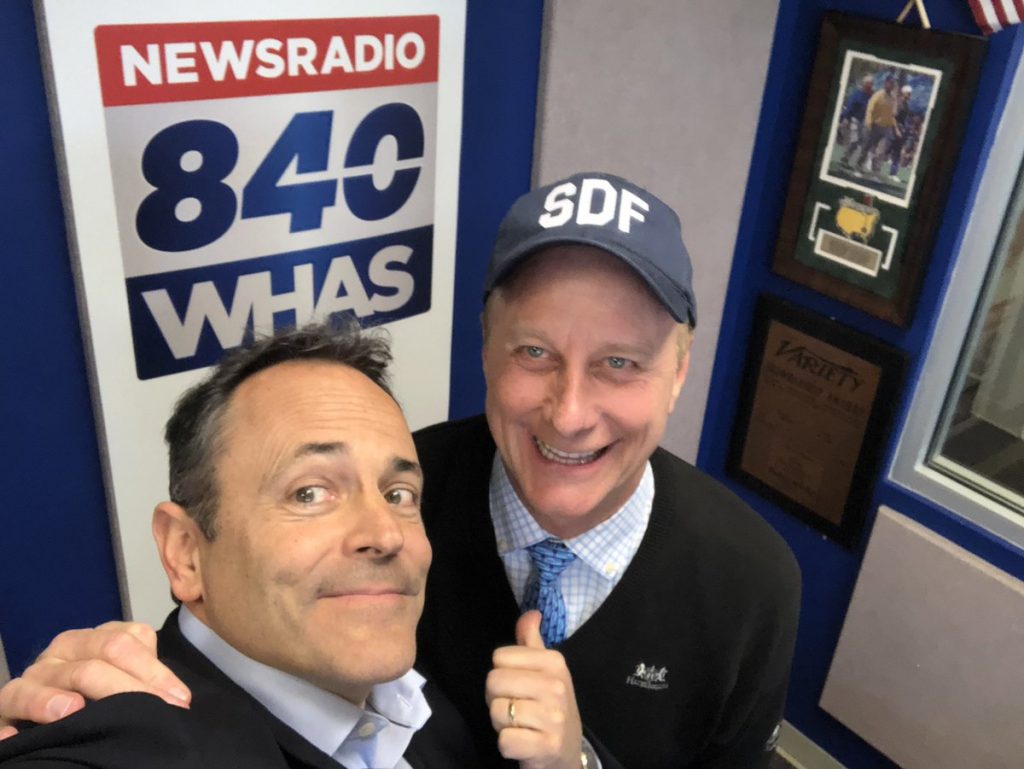 Kentucky Governor Matt Bevin texted: “Are you on air today?”
Me: “Yes sir.”
Gov. Bevin: “Want me to stop by?”
Me: “Absolutely”

A few minutes later, Governor Bevin strolled into my studio and we launched right into a 23 minute chat on a myriad of topics. Local media immediately jumped on Bevin’s sardonic comment about America’s “soft” culture where school is called off for cold temperatures.

.@GovMattBevin told @terrymeiners that #Kentucky schools closing for cold weather shows 'we're getting soft’ but a chorus of teachers and political rivals from both sides of the aisle quickly rebuked those comments: https://t.co/OiglXzwNcx #KYGov

This WDRB transcript (below) put Bevin’s comment in better context but the audio reveals that Bevin is chuckling when he makes the statement, later adding that it’s better to err on the side of caution.

Nonetheless, lots of media outlets took the lazy path and keyed in on this joke only with no other reference to some serious topics that were covered. Lazy journalism (Covington Catholic!) never ages well. 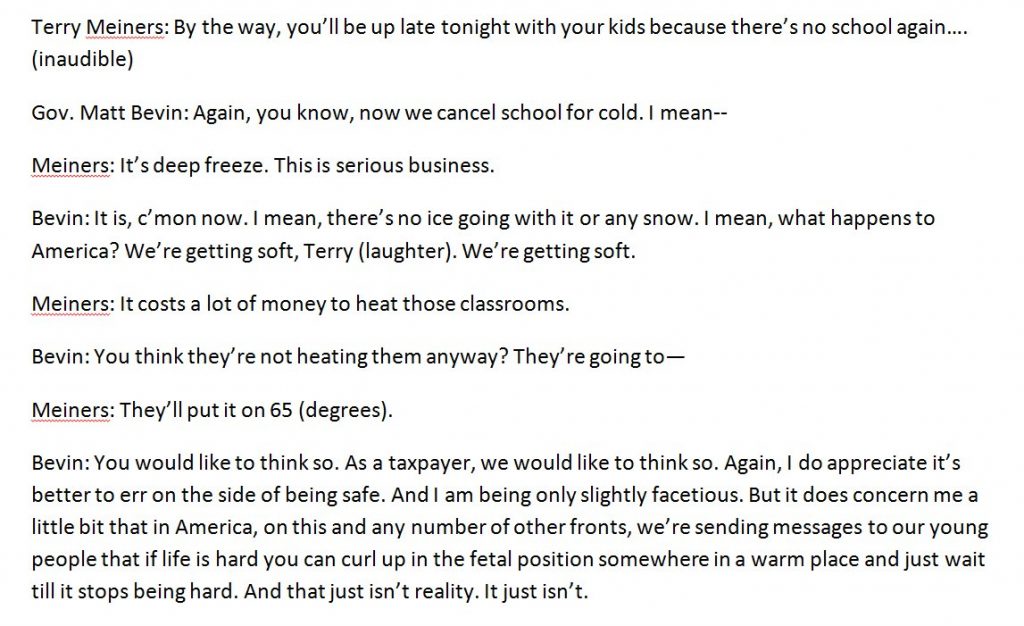 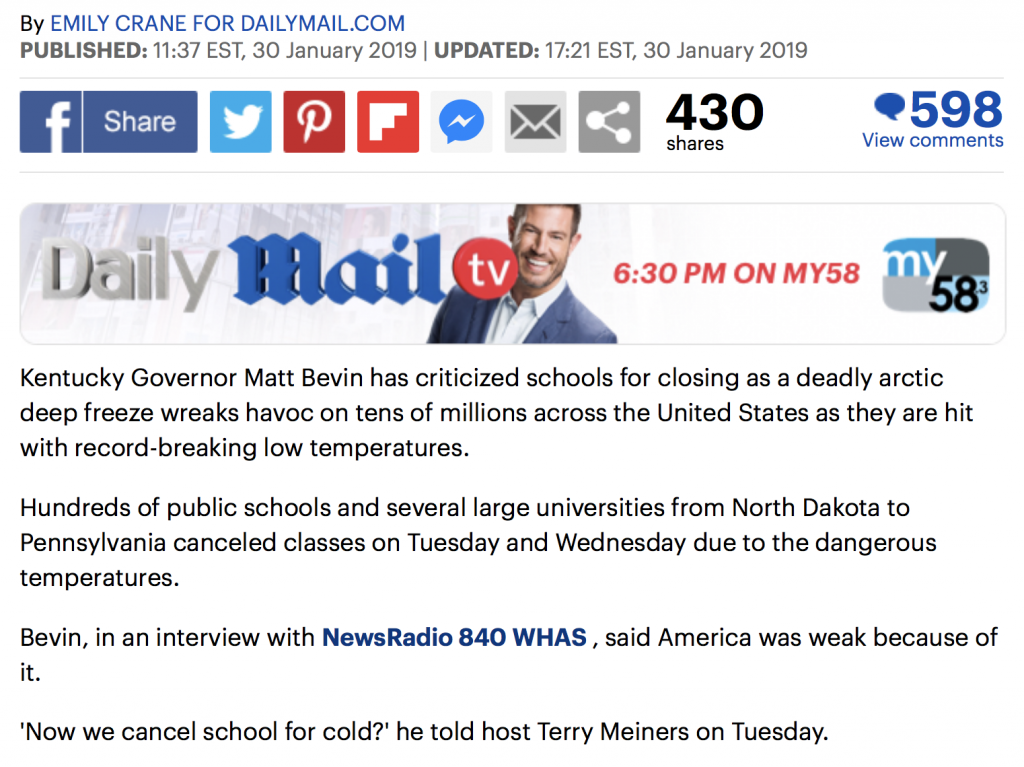 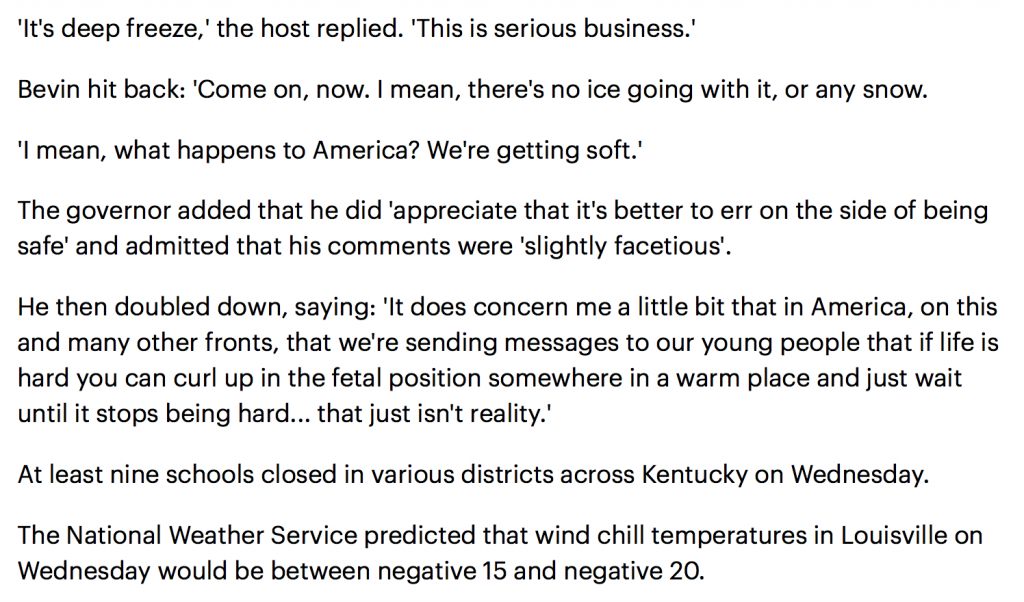 Remember all the outrage from these clowns at the ⁦@courierjournal⁩, ⁦@heraldleader, ⁦@WKYT⁩ and that highly esteemed journalist, ⁦@alroker⁩, when @BarackObama said this about snow & school cancelations?

The tattered remnants of the mainstream media at @courierjournal @heraldleader & national media (including weatherman @alroker), continue to rush out like blind lemmings…Cutting & pasting quotes in order to mislead & elicit “outrage” from the hyper-sensitive and easily fooled..

Other topics included Bevin’s sharp pushback at Congressman Jamie Comer’s assertion that the governor is arrogant and detached from people across the state. Bevin mentioned that some political figures have problems with women. Comer was accused of abuse by a female during his college years.

I later texted Rep. Comer and asked if he would like to come on the air soon to reply to Governor Bevin. Mr. Comer informed me that he was busy planning his father’s funeral, adding a sarcastic note that “Bevin is a class act.”

Rep. Comer will join me on the radio next week.

Bevin and I covered sports gambling, marijuana, taxes, and New York’s expanded abortion rights, all pushed aside by Kentucky’s governor in our WHAS Radio interview. Bevin called third term abortions “disgusting and sadistic,” noting that activists often decry the methodology for capitol punishment as “too cruel” for death row inmates but “cheer” for late term abortions.

We talked about Bevin’s change of running mates from an African American woman to a Hispanic state senator who could have maximum impact in Andy Beshear’s central Kentucky stronghold.

Bevin said he will continue his push to save public pensions even though he faces fierce pushback from teacher unions and the rank-and-file.

As for his competition in May’s Republican primary; “(I’m) not too worried.” Bevin called all of his potential general election Democrat opponents “stale” names, “want-to-get-back-in-the-game names.”

Bevin said he doesn’t mind spending more of his own money but that it is not fair for candidates to have to self-fund so he will be out seeking financial support to win re-election this fall.