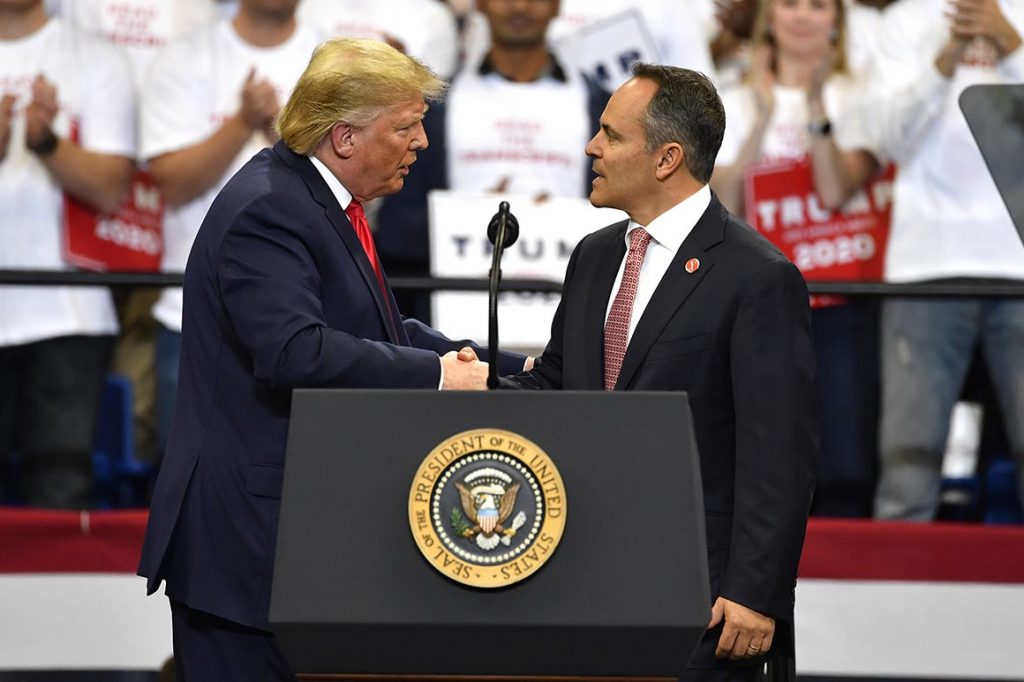 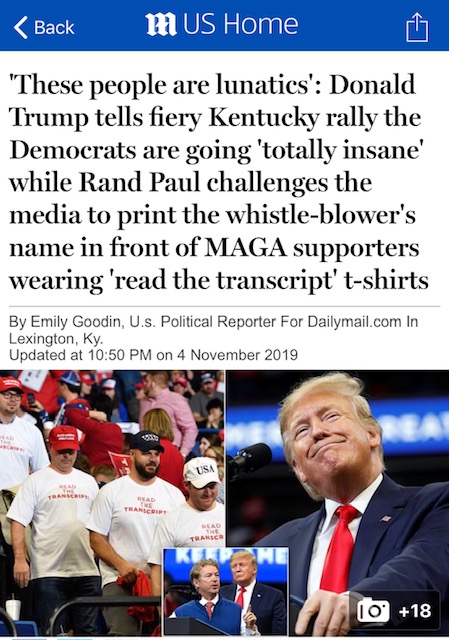 “Matt Bevin is pro-worker, pro-life, and 100% pro-Second Amendment,” Trump said to a rousing response from the audience.

As for the chance that Democrat attorney general Andy Beshear could take the governor’s seat from Bevin, Trump stated emphatically “You can’t let that happen to me.”

President Trump has made a last-minute rally push Monday night for Kentucky Gov. Matt Bevin, a strong ally who is facing a tough fight in Tuesday's election against Democrat Andy Beshear, the state's attorney general. https://t.co/TDiHBxv7Ql

The Lexington Herald Leader’s takeaway centered on a Trump joke about Bevin’s persistent requests to persuade company owners to consider expanding in Kentucky. Trump kidded that Bevin can be “such a pain in the ass, but that’s what you want.”

There’s the “gotcha” phrase that the Herald Leader can use to mirror its own editorial summary of Bevin, his administration, and anything Republican. 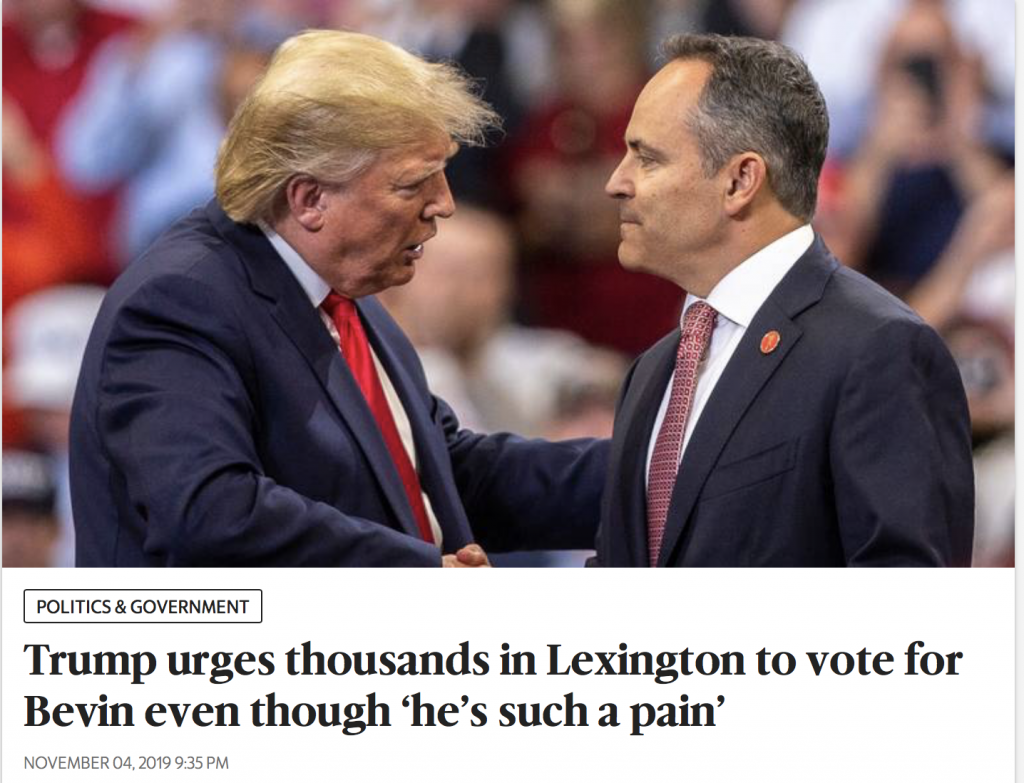 The POTUS mocked Joe Biden, Nancy Pelosi, Adam Schiff, The Washington Post, “fake news” media, and other liberal faves like gun control and the Paris Climate Accord. “These people are lunatics!” Trump blasted from the stage.

The state’s two largest newspapers remain perpetually blue, trying to sell their products in a decidedly red Kentucky. No national Democrat rallied on behalf of Andy Beshear over the course of the campaign. With Democrat 2020 presidential candidates’ overt promotion of socialism, free healthcare for illegal immigrants, and climate change prioritization, no Kentucky candidate needs friends like those.

Earlier in the day, I spoke with Governor Matt Bevin and his challenger Andy Beshear in separate WHAS Radio interviews. Both candidates gave their projection of what Kentucky will experience in the weeks following this election.

📻 Election Day is Tuesday. I spoke with @GovMattBevin and his opponent @AndyBeshearKY today on @840WHAS. Each projected how the next 100 days will look in Kentucky if they are elected. 🎙. AUDIO https://t.co/v7zPy9xU3l #election2019 #KyGov https://t.co/EMYwUGhNZA pic.twitter.com/ub2EaPiTmI

Senate Majority Leader Mitch McConnell traveled with President Trump on Air Force One for the Lexington rally. Both of Kentucky’s senators were called to the stage to make brief comments. 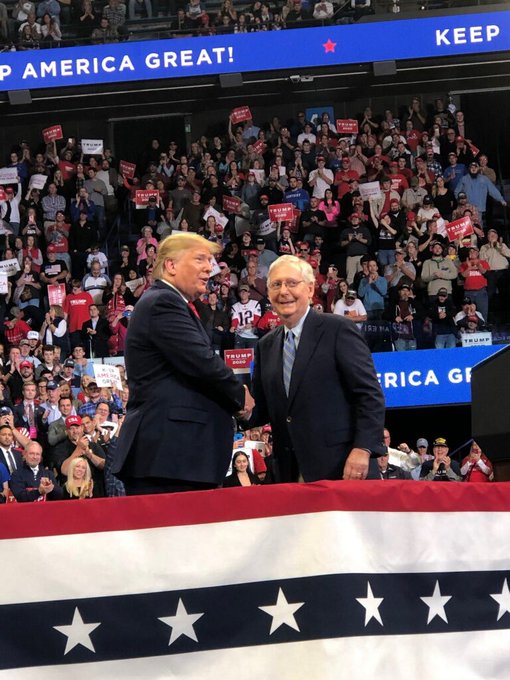 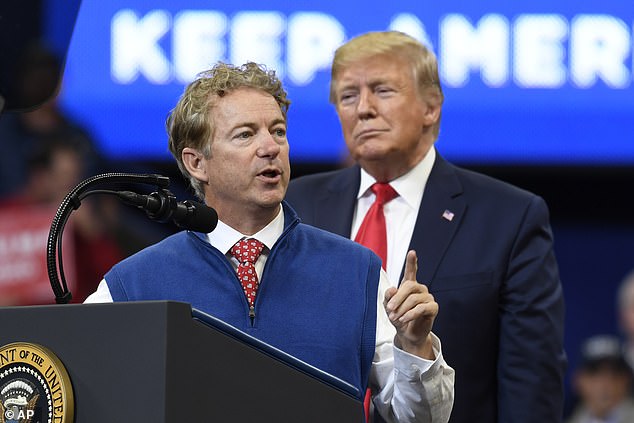 And just like that, President Trump is back in Washington. Gov. Bevin texted me a few minutes ago with a smiley face and thumbs up emojis to signal his joy with the rally experience.

We will know how Kentucky’s future political landscape is shaped in 24 hours.

Words matter. Stupid words not so much.

That’s the gig, a gig of gags.

Politicos are rarely mistaken for standup comedians. They’re gasbags. On one Saturday a year, their gas turns to flat gags and suddenly news reports about Fancy Farm validate America’s suspicion that Kentuckians are a living Dukes of Hazzard script. (And not one of the good ones where Daisy bends over to pick up her MCAT acceptance letter).

“Noise proves nothing. Often a hen who has merely laid an egg cackles as if she laid an asteroid.” – Mark Twain

What is the value in dowdy politicians surrounded by costumed adults squawking, jeering, and whining about political rivals every summer at Fancy Farm? This less-than-august August shouting match is little more than a Westboro Baptist Church hate rally disguised as a Catholic picnic.

Loyalties are already locked and loaded; no minds are changed. This “picnic” is just a religiously sanctioned queer punch, something the Catholic Church can get behind.

See what I did there?

That’s an example of caustic name-calling and stereotyping that permeates this Fancy Farm bullyfest for political vermin. No solutions to Kentucky’s education, health, or financial issues are put forth. No enlightenment. No respectful exchange of ideas.

We’re still undereducated, obese, and have underfunded pensions but hey, that chinless Howdy Doody McConnell’s beard is probably wearing a wig! A beard with a wig! That’s f-ing hilarious! Go Cats! (McConnell is a Louisville guy, so in 119 of 120 counties that is a designation worse than lion-killing dentist).

At the podium, our elected leaders and hopeful replacements channel Jimmy Fallon but without his timing, elocution, inflection, or looks. Especially looks.

We are teeing it up for America to keep us at the bottom of the food chain.

A full day of Fancy Farm wisdom still doesn’t equal even one lonely Facebook post from the guy your high school picked Most Likely to Still Be Living With Mom. The Catholic Church has no business hosting a breeding ground (another joke!) for more hatred. ‘Tis summer and, by God, our people are gay. It’s in the song, monsignor!

Hey St. Jerome Catholics — Remember the Last Supper? There should be a picture of it hidden behind that giant BEVIN SELLS HELL’S BELLS banner. Take a peek.

Let’s upgrade your pathetic spectacle of white noise — are people of color still forbidden in Graves County, or is it only books that are banned? — to a sensible dinner party where one person speaks and gets to use her “inside voice” instead of fending off a covey of creepers.

If that collection basket thrives on venomous productions only, let a civic organization stage a respectful dinner setting along the lines of a White House Correspondents Dinner. Candidate speakers tell their jokes and, God forbid, share their visions for problem solving in Kentucky. Seated diners can choose whether to laugh, applaud, or remain silent. Hecklers are removed from the premises. No idiots with signs. Place a guard near the power source so a political zealot doesn’t get electrocuted snipping the power line with hedge clippers (generating another national story about Kentucky rubes).

And, just for grins, let’s ask everyone to wear a shirt. Preferably one without curse words on it.

Class. It doesn’t come in a moving van and it certainly doesn’t associate with St. Jerome’s Fancy Farm schtick-nic, once a civilized exchange of stump speeches.

Couldn’t get tickets? Just stay cool by watching civility streamed online. Hecklers are suddenly silenced by a NO COMMENTS thread blockade. Let’s hear ideas from the candidates, not some drunken loudmouth who’d scream at a baby for crying on a plane.

Less sniping through Skyping. The devil’s in the details.