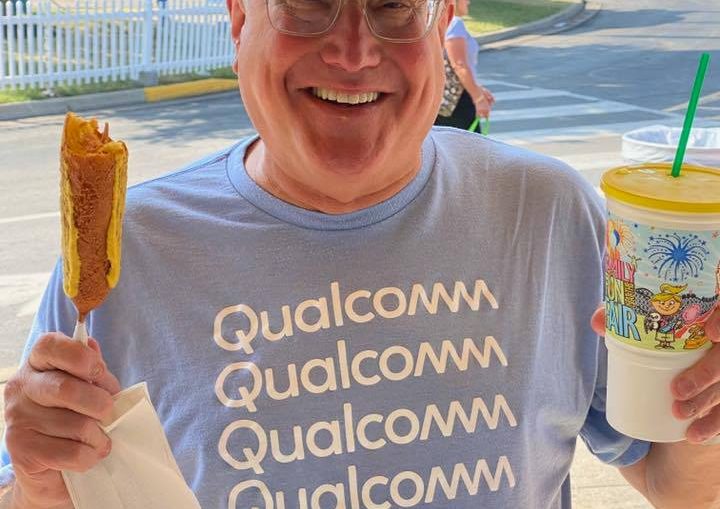 There's nothing quite like broadcasting at the Kentucky State Fair. Fun people, great food, sweet farm animals, and constant noise. Plus, you get to meet namesakes who sell knives and stun guns...always good to have on standby! Our broadcast teams are terrific. We love getting out of the usual studio environment and interacting with listeners. The pandemic limits up close conversations but a friendly wave is better than nothing. Conversations with some vendors are downright hilarious. Meet Dave Taylor from Sivori foods. Listen to "A taste of the Kentucky State Fair" on Spreaker. Fully vaccinated peeps like Miss America Heather French Henry are always welcome for up close and personal interaction! Our crew is not shy about wolfing down Kentucky Pork Producers pork chop

Bisig Impact Group co-owner Larry Bisig invited me to his advertising/marketing company for a chat on camera. Cool. We talked about my radio history, growing up with discipline, the last days of Ron Clay, my evolving tolerance, how to interview big ego people, dealing with violent students, and drunk college buddies trying to ruin my job. Good talk, L Man. Thanks for having me.

My radio show today featured back-to-back interviews with political opposites Kentucky Governor Matt Bevin and U.S. Representative John Yarmuth (Ky-3). Here's the governor talking about potential expansion of Toyota's manufacturing presence, his victory in the PVA assessment of his home, misdirected media, pension pressure, and tax changes to retain wealth. As for the possibility of facing Attorney General Andy Beshear in the 2019 gubernatorial race: "To me that would be fantastic. He is not even competent as an attorney general." AUDIO Congressman Yarmuth talked about North Korea's nuclear threats toward the U.S., President Trump's reply that America would bring "fire and fury never before seen in the world," congressional health care camaraderie, and whether VP Mike Pence is sincere in claiming that he

SURVEY: AMERICANS DON'T TRUST MEDIA BUT FEEL BETTER ABOUT FAVORITES The chasm widened between media and those in power + their supporters. Kentucky Governor Matt Bevin responded to derision from certain media outlets that are routinely ignored by the executive branch. Louisville's Courier-Journal and Lexington's Herald Leader are both named in Bevin's new Facebook video (below). Bevin says "a handful" of (what he considers) negative media people "are like cicadas...not serious journalists." He claims their out-of-state owners engage in tabloid journalism so he wants to communicate directly with constituents via social media, radio shows, and smaller newspapers. Bevin expects newspapers to tout "extraordinary business developments...but you wouldn't know it" by reading their news stories. The Herald Leader slammed my interview work