Rep. John Yarmuth jumped on the radio with me today to discuss last night’s tumultuous protest outside the home of Senate Majority Leader Mitch McConnell. We also talked about what to do with modified weapons that fire 100 rounds in a few seconds, the perils of doxxing, and the uproar over McConnell fanboys pawing all over a cardboard cutout of Rep. Alexandria Ocasio-Cortez. 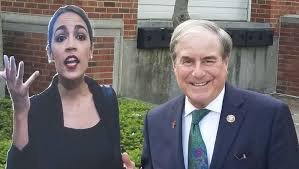 Yarmuth said Republicans are fearful of acting on gun legislation because they would likely pick up primary opponents who would claim 2A purity.

Tonight, protesters are outside McConnell’s office in downtown Louisville to urge the senate to address weapons legislation already passed by the House of Representatives. Yarmuth is a spotlighted speaker at the downtown rally.

This is a much more reasonable public spectacle that could actually persuade people to change their opinion on various gun issues. Standing in front of a private home and disrupting neighborhood peace by screaming obscenities for 2+ hours is not likely to win over any fans.

Dodging cameras when you’re off work

What a proud legacy – bias, vulgarians, and the splintered media climate