Former WHAS11 and WDRB meteorologist Jeremy Kappell was fired at a Rochester, New York station after the internet mob determined that his on air phrasing of Martin Luther King Junior’s name was a deliberate racist shoutout.

In what reasonable people would consider spoonerism, Kappell mashed up “King” and “Junior” and said “coon” and quickly corrected himself. It’s the exact same verbal mashup that ESPN’s Mike Greenwell tripped through a few years back without repercussion.

Wait, what? That’s right. The ESPN guy said “oops” and went on with his life back then.

Today it’s all about the WOKE factor. It doesn’t matter what a person says in their own defense. The WOKE crowd is allowed to determine what is in another person’s heart, even if that person has NEVER done a thing to validate the WOKE crowd’s instant vilification.

Some of Kappell’s detractors are other media people, none of whom who know him or have worked with him. Here is Kappell responding to white small town newspaper writer in New York state. Of course, a newspaper writer does not ad lib anything to a live audience. They write words that are that are then pored over by editors or other news colleagues before they’re posted.

Jason, for the record, my most weathercasts are 100% unscripted. No teleprompter. Just words and about 450 of them on average per main weathers. Get your facts straight and please stop trolling. https://t.co/gqqRSWimog

Kappell’s description of live TV ad lib delivery is correct. That’s a challenge that no newspaper or prerecorded media person could possibly understand.

New York Times bestselling author Kurt Eichenwald tweeted support for Kappell through a series of posts explaining spoonerism. Eichenwald even suggests that Kappell should sue his former employers who failed to back him against SJW pressure.

1. This may seem a minor issue, but I hate people wrecked unjustifiably. So, I am coming to the defense of @JeremyKappell, meteorologist at WHEC in Rochester. As someone who frequently flubs speech through word transposition, I recognize Kappell was fired for a spoonerism….

Some of Kappell’s online media detractors are people that I know connected to Louisville companies but are not associated with Kappell. I am surprised at their agreement with the Facebook post “It came out so naturally.” 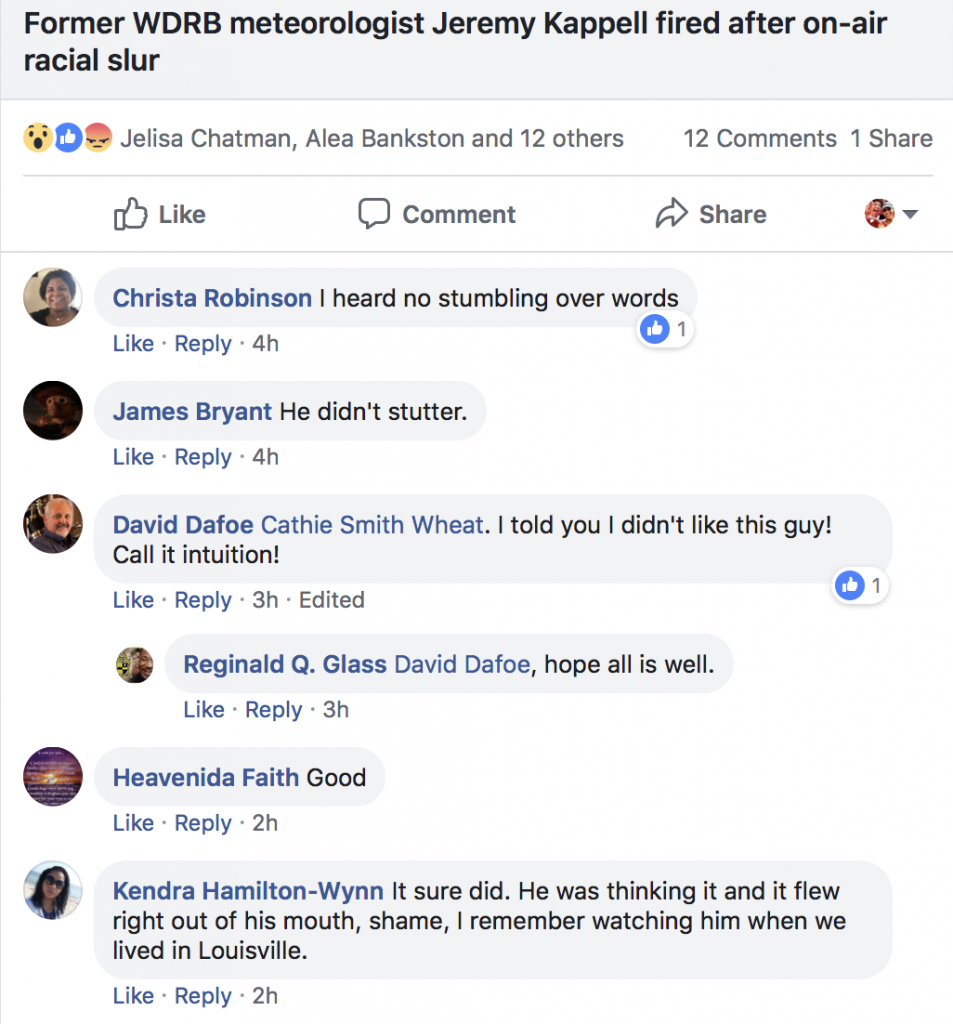 Social justice warriors can make the Salem with trials seem like child’s play.

Grown people like the mayor of Rochester and a former TV meteorologist speaking on behalf of the Black Journalists Association are convinced that Kappell intentionally used a racial slur. And that’s apparently enough for a TV station manager to terminate the meterologist’s job. 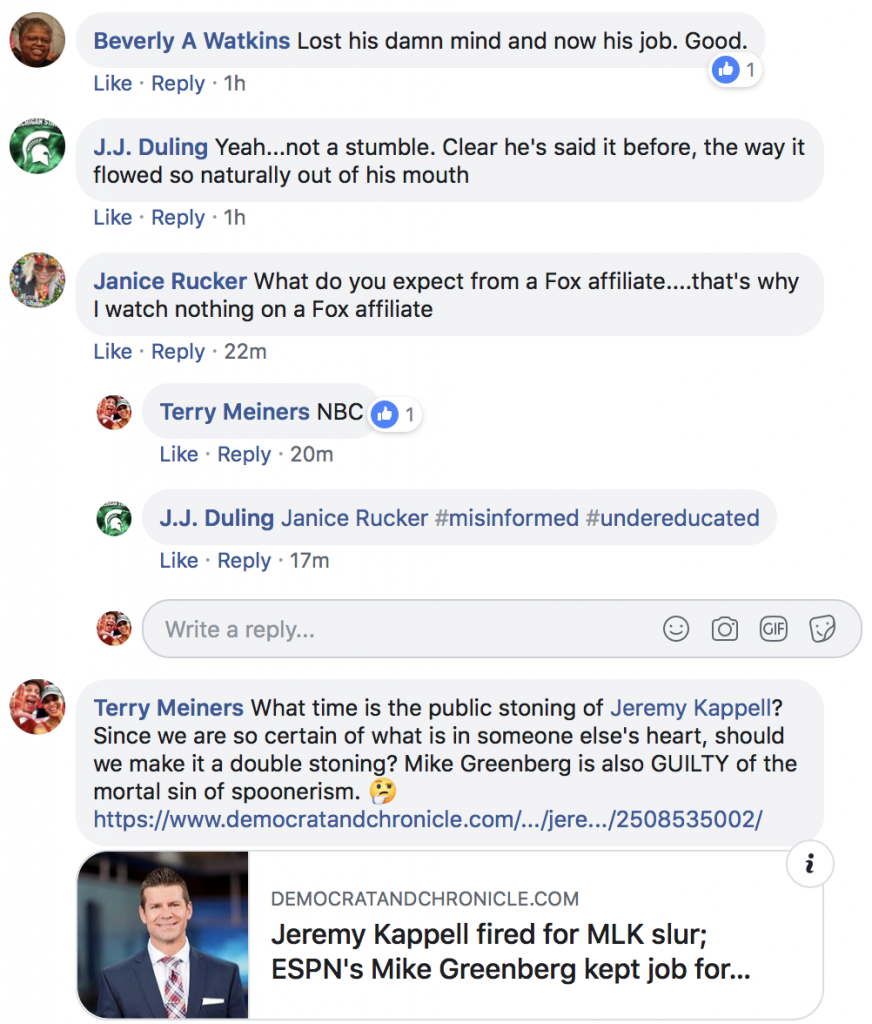 Here is the BREATHLESS report from Rochester station WHAM, a direct competitor to Kappell’s WHEC, a weird bit of schadenfreude (enjoyment of someone else’s misery). WHAM wants everyone to know they are WOKE.

My experience with Kappell, mirrored by many other supportive Louisville media people, is the memory of a hard working, thoughtful, quiet person who never uttered an unkind word.

Now could he have fallen, bumped his head, endured brain damage and suddenly decide to become a Klansman? Not likely, Sherlock Holmes.

The notion that any longtime professional broadcaster in their right mind would blurt a racial epithet on the air is beyond ridiculous. Kappell has been on the air for a thousand hours over his career, and then suddenly decides to ruin his life by rolling out an offensive word?

Mayor Lovely is anything but. Leaders are supposed to exercise caution, thoughtfulness, and avoid hair trigger reactions before all sides are heard. She simply had Kappell crushed over a ridiculously baseless race hustling stunt for herself. Same goes for the former meteorologist who knows the commonality of mangled words for any broadcaster who spills hundreds of thousands of ad libbed words every week.

The accusing “journalist” (meteorologist) wants to know what WHEC-TV will do to guarantee that nothing like this will ever happen again.

As long as people speak words, some will be mangled. If it happens on live TV, grow a brain and realize that embarrassing mistakes are commonplace. 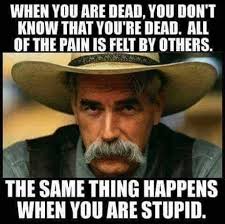 Suddenly college hoops in Louisville is a happy thing

Meet the new boss, not the same as the old boss