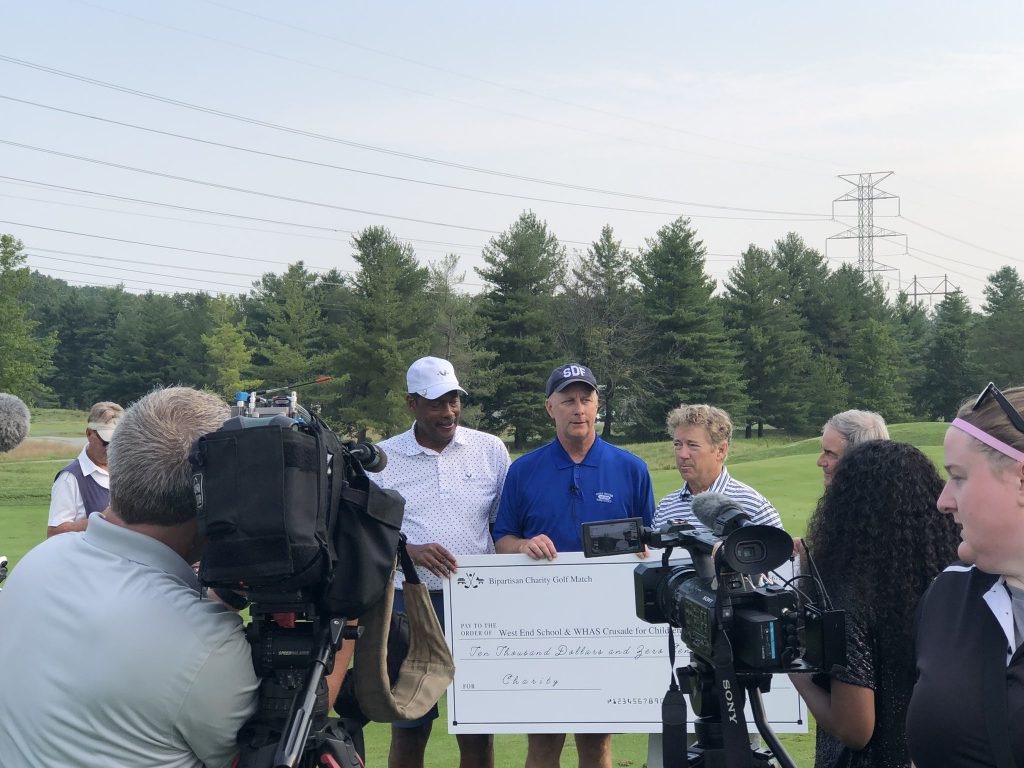 Thanks to Senator Rand Paul and Representative John Yarmuth for illustrating that those with nearly polar opposite political views can work together for charity.

Businessman/philanthropist Junior Bridgeman leveled the donations so that each charity picked up $7,500.

Congratulations to Team Yarmuth/Meiners for closing out the match on #16 with a Yarmuth birdie. 🏆

If you asked the average person, would a Republican and Democrat play golf together in 2021 – without getting into a yelling match – most likely the answer would be no.

Imagine if you told them they were both members of Congress … The answer would probably be “definitely no!”

See, the media would like you to believe that we all hate each other up in Washington. That we walk around full of deep disgust for anyone who dares to identify with the other party’s name.

But that’s simply not true.

The honest truth is that there are a lot of places where Republicans and Democrats do agree, and giving back to the community is one of them!

On Friday I teamed up with businessman and philanthropist Junior Bridgeman to play a round of golf for charity against Louisville’s Democrat Congressman John Yarmuth, who was joined by WHAS 840’s Terry Meiners. The four of us spent the morning out at Louisville’s own Valhalla Golf Club for a little friendly competition and to raise money for two incredibly deserving organizations.

Rep. Yarmuth and Terry played for WHAS Crusade for Children, which raises money for agencies, schools and hospitals to make life better for children with special needs.

Junior and I played for the West End School in West Louisville, which is a tuition-free independent school that serves boys from low-income families in pre-K through 8th grade, and includes a boarding component for their middle school students.

While Junior and I put up a good fight and had tied the other team after nine holes, ultimately Rep. Yarmuth and Terry won the match, thanks to a birdie on the 16th from Rep. Yarmuth. The good news is that neither of the organizations lost – while originally $7,500 was planned to go to Crusade for Children and $2,500 to the West End School, after the match, Junior Bridgeman stepped forward and wrote the whole check for $10,000 plus an extra $5,000 … so both organizations received a total of $7,500!

Supporting a good cause isn’t the only thing Democrats and Republicans can agree on. It may be surprising to some, but Rep. Yarmuth and I actually have found agreement on some policies too.

What is gain-of-function research?:Here’s what Rand Paul and Dr. Fauci are fighting over

We both support criminal justice reform and ending the use of no-knock warrants. We also both opposed the war in Afghanistan and have continued to advocate for bringing our troops home. And when it comes to defending your privacy, we both have deep concerns about the NSA’s collection of Americans’ private data.

Yes, it may seem like we disagree on far more – and when it comes to a lot of the hot topics of the day, we absolutely do. But that doesn’t mean we hate each other. It just means we disagree.

Rand Paul is a Republican U.S. senator from Kentucky.