Skip to content
You are here
Home > Uncategorized > Freedom for freewheeling

Many thanks to dozens of police officers and other law enforcement personnel who have given me advice and support following an unnecessary encounter with one particular police officer.

Apparently, even fellow officers routinely felt the sting of Sam Cromity’s relentless pursuit of drivers he deemed lawbreakers. Cromity once chased another unmarked LMPD car down I-65, ignoring the pursued officer’s police lights signaling that they’re on the same team. Upon reaching the police parking lot, the pursued homicide detective screamed obscenities at the unmoved Cromity, who still wanted to write a ticket. The matter was handled internally with Cromity losing the argument.

The ailing mother of an LMPD sergeant was detained by Cromity even though she was driving herself to Audubon Hospital’s emergency room. As she suffered from chest pains, the police officer made her wait while he wrote her ticket. The female sergeant later sought out Cromity and allegedly threatened to reveal embarrassing personal information to his superiors. The matter was handled internally.

Another woman told me that Cromity threatened to arrest her after she misunderstood his order to pull into another lane while trying to park near Papa John’s Cardinal Stadium. She said that the episode upset her so badly that she cried in her bed for three days.

A United States Drug Enforcement Agency officer told me that he had “never been treated so disrespectfully by a fellow law enforcement” colleague after Cromity detained him in July 2011 while he was working surveillance on a suspected felon. Cromity pulled the agent over just as I-64 switches from 65 to 55 mph. Showing his credentials as a federal agent and informing the police officer that he was in the process of surveilling a bad guy, Cromity’s curt reply: “That don’t mean nothing to me.”

Waiting for Cromity to write the ticket, the federal agent called his office and it was suggested that he drive away to continue his surveillance work. The DEA would retrieve his driver’s license at a later time. The agent emerged to inform Cromity that he had to pursue his suspect but Cromity only screamed “GET BACK IN YOUR VEHICLE.”

Former LMPD chief Robert White had to handle the aftermath of that embarrassing brouhaha between the local and federal law enforcement agencies.

Sam Cromity isn’t always a “by the book” officer. He once went to a brother officer (now a Jefferson County Sheriff’s Deputy) to ask if he could “fix” a ticket given to Cromity’s son. Unaware of Cromity’s penchant for writing tickets to other officers, this officer agreed to miss court, allowing the case to be dismissed.

Fixing tickets in Jefferson County is not an acceptable practice.

Several Jefferson County Sheriff’s deputies were chastised by Cromity as he allegedly attempted to escort several women around the security checkpoint by leading them through a 7th Street entrance for attorneys.

Former officer Walt Oster said he was written up by Cromity while working a funeral procession for a fallen soldier. He said he was treated disrespectfully and that Cromity was “a bad representative” for LMPD.

At the top of Zorn Avenue, Cromity wrote a speeding ticket in the “25 mph school zone.” The driver pointed out that it was a national holiday and no children were in school. Cromity reportedly said that he saw children in the area moments earlier and that “they must have run off.”

In June 2011, Cromity reportedly removed a case file to make a ticket disappear for a female employee of the police credit union.

NO WAY TO TREAT A BROTHER

He’s written tickets to state troopers in Kentucky and Indiana, and uniformed officers from various area departments on their way to and from work.

I never stood a chance against this guy on the road. I knew I wasn’t speeding and that I was not going to let him lie about me and stick me with a $200 ticket for something I hadn’t done.

This week, Jefferson Circuit Court Judge Mary Shaw dismissed a civil lawsuit against Clear Channel Media, WHAS Radio, and me filed by former Louisville Metro police officer Sam Cromity. Judge Shaw ruled that my radio comments about the officer were “a matter of public interest and are non actionable expressions of opinion.”

The suit was filed in March 2012, exactly one year after Cromity pulled over another driver for allegedly speeding, and, as I approached from behind, Cromity used an arm signal to force me to the side of the road.

Cromity issued citations to each of us and stated the same line at each driver’s window, “You’re running 75 in a 55.”

I challenged the allegation and took it to trial in Jefferson District Court before Judge Jennifer Wilcox. A crash reconstruction expert used the police car’s dashboard video to illustrate how the other driver was traveling between 63 and 65 mph. Cromity erroneously charged both drivers with going 20 mph over the speed limit, a higher penalty threshold. That other driver testified in court that he did not think he was going anywhere near 75 mph. Nonetheless, he had already paid his fine and took a 6 point penalty on his driver’s license.

On the day the tickets were issued, I talked about Cromity’s erroneous allegation against me and called him a liar multiple times on my afternoon radio show.

A few days later, Mr. Cromity appeared at Clear Channel studios on the personal business of asking for recordings of the March 18, 2011 radio show. He was wearing his police uniform complete with a service revolver and taser. I interpreted that as an attempt to harass, intimidate, and embarrass me in front of my co-workers.

Later that day on the radio I referred to Cromity as Black Car Barney and Black Barney, a mashup of Mayberry deputy Barney Fife, the black car, and America’s most notorious stagecoach robber Black Bart. I noted that Black Bart was famous for “robbing people (who are) just passing through.”

Cromity hired attorney Andrew Horne on a contingency basis, meaning that the attorney receives a percentage of anything they collect from the parties named in the lawsuit. Four months before my speeding ticket case was heard in court, Horne sent this proposal for a $30,000 settlement and an on-air retraction to “resolve all claims to all parties.” 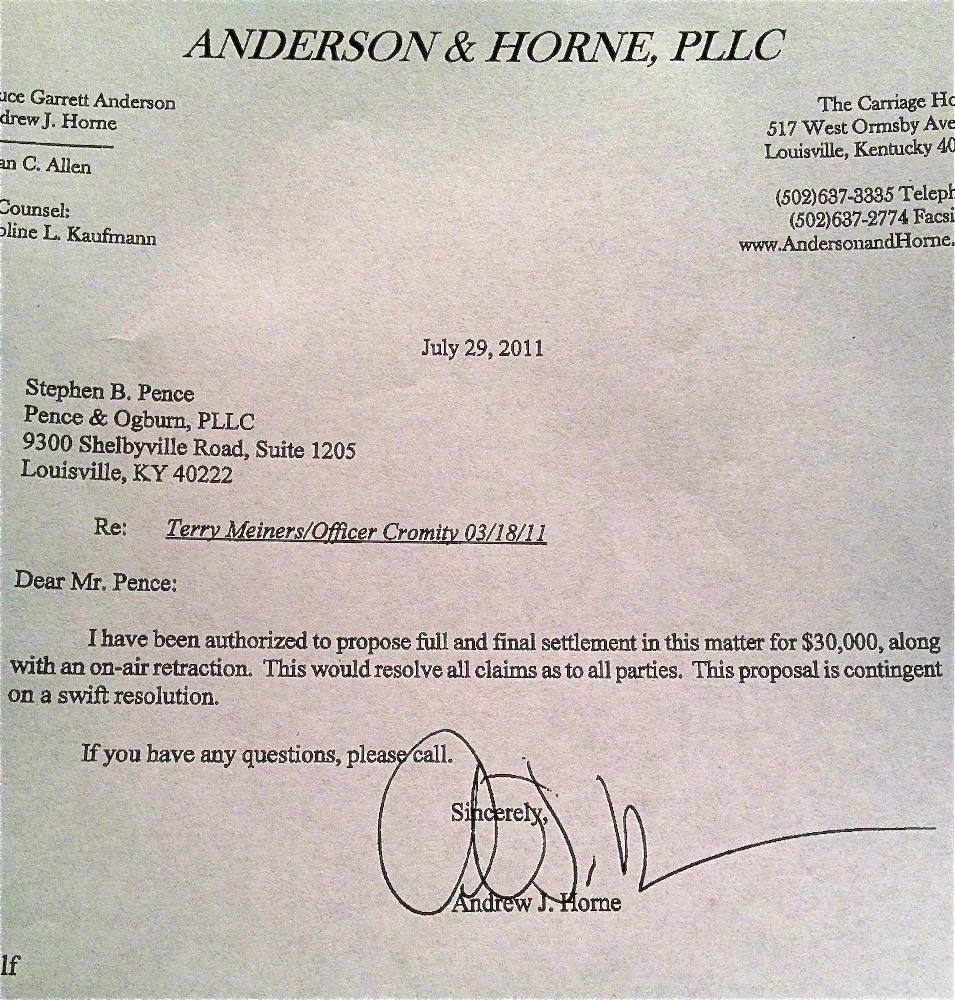 My attorney, Steve Pence, ignored Cromity’s attorney’s request for money and continued preparing to challenge the speeding ticket in court.

In November 2011, the speeding ticket case went to a jury trial. A city of Louisville equipment procurement employee testified that Cromity’s police car did not have a connecting cable between the radar detector and the dashboard video system. No record was kept of any driver’s speed, nor is there proof that a radar unit is even turned on.

The police officer also admitted that he was chatting with his girlfriend on his cell phone while he was pulling over two cars in the fast lane of the Watterson Expressway. Mr. Cromity repeatedly clarified for the court record that she was now his “ex-girlfriend.”

Although Mr. Cromity originally declared to prosecutor Matt Welch that he had “just gotten on the phone” at the time of the traffic stops, cell phone records showed that he had been on the phone for six minutes.

Mr. Cromity’s dashboard video contradicted some of his court testimony regarding the positioning of his police car and of the two cars he stopped.

At the end of the trial, a 6 person jury took only a few minutes to declare that I was NOT GUILTY. 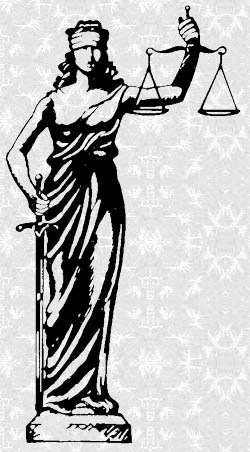 I immediately shook the hand of my attorney, the prosecutor, and attempted to shake the hand of Mr. Cromity, just as we’d done that morning prior to the start of the trial. The police officer rebuffed my extended hand, saying, “Kiss my black ass” as he turned toward the crowded gallery.

The Courier-Journal reported that Mr. Cromity then said that if I wanted to call him a liar, I should do it to his face.

I never heard that comment. Mr. Cromity paced outside the courtroom, chatting on his phone and occasionally staring at me as I talked with a reporter and my attorney.

We have not spoken since that day.

When exactly one year had passed from the date of the speeding ticket, Mr. Cromity’s attorney Andrew Horne filed his civil lawsuit against my employer Clear Channel and me for defamation.

Steve Pence responded to the lawsuit with a motion stating that I host a “radio talk show given to robust, freewheeling and often intemperate discussions” based on “nondefamatory facts fully disclosed to the listening audience.”

After Judge Shaw dismissed the lawsuit this week, Horne said he would file an appeal.

Mr. Cromity is now retired from the Louisville Metro Police Department. His notoriety for voluminous ticket writing was publicized in media stories on irregular overtime accruals and inordinate amounts of court pay.

Police officers do the toughest jobs in society, but only a scant few are able to give themselves a pay raise and pump up their pensions by arbitrarily assessing fines on fellow citizens. 99% of police officers are out there busting their humps doing police work and they do not get to share in the “tip jar” of court pay.

Perhaps all court fees should go into a fund spread evenly among all working officers at year’s end.

Some have warned me to be careful driving because his brother officers would be out to get me. Nothing could be further from the truth.

I remain a strong supporter of law enforcement and know that the actions of one renegade do not diminish the terrific work of the Louisville Metro Police.

Several years ago, I recorded public service announcements for the police department’s 574-LMPD tip line. I have spoken to law enforcement groups about my media career. I am a financial supporter of the Louisville Police Foundation. I have many friends on the force.

I take my gun training lessons from Officer Jim Sherrard at the TG&G Range near my office.

None of those relationships have changed because of my puzzling drive to work on March 18, 2011.

A week after Judge Shaw’s dismissal of Mr. Cromity’s lawsuit, WDRB-TV ran a profile of Clarence Beauford, another LMPD officer known for voluminous ticket writing. Officer Beauford is also one of the highest paid officers on the force because of his extraordinary court pay (about $50,000 extra from 2004-2008).

Driving his unmarked silver Mustang, Officer Beauford notes in the WDRB story that in 24 years he has never written a ticket to a fellow officer.

Mr. Cromity is welcome to submit a response to this blog post and I will print it in its entirety.

Again, I can’t say thanks enough to the numerous police officers who have provided me guidance and information to assist my handling of this incident with this particular officer. I got a great education from it and feel like I helped every driver in this community by standing up for myself.