Skip to content
You are here
Home > Uncategorized > Is that fancy purse brand called LOO-uh vi-TONN? Is the arch in Saint LOO-uh? Is that song by The Kingsmen called LOO-uh LOO-uh?

I guess you’re celebrating another example of the homogenization of local dialects: LINK 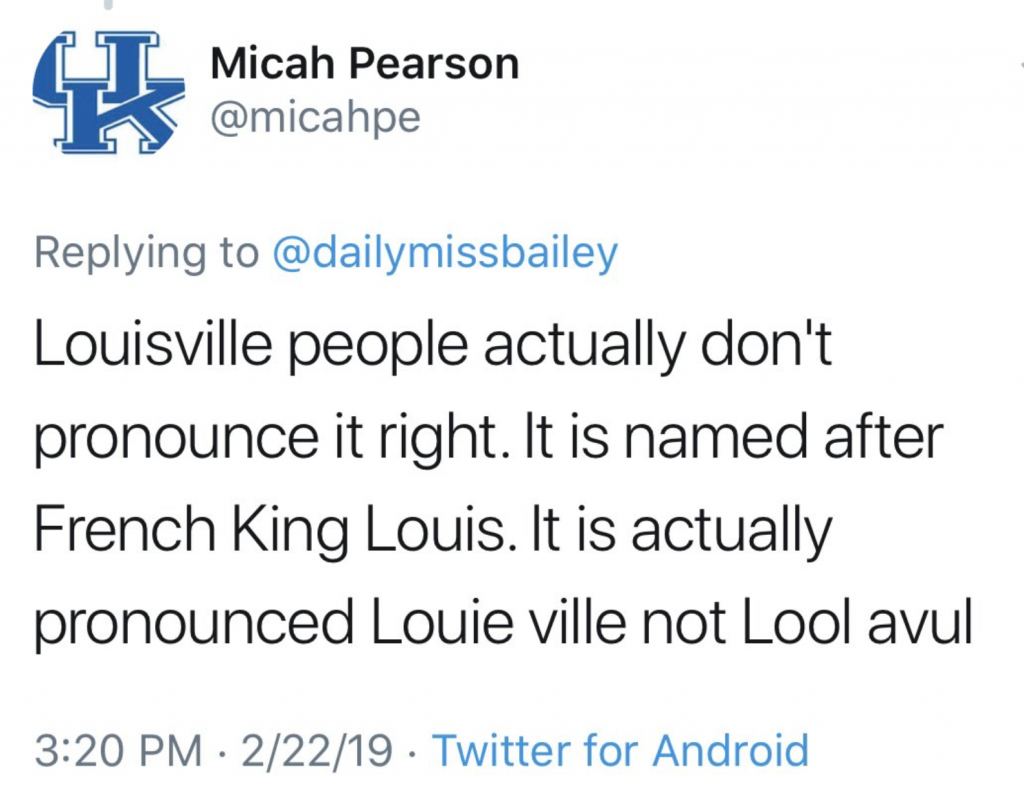 Louisville: Where our name is a multiple choice.

Louisville, Ky. — Everyone here agrees that this city’s nickname is pronounced “The Ville.” So how is it that so many people call the complete name Loo-uh-VULL? More than half of the area’s residents call this city by its hillbilly name. Some even dumb it down to the lowest of lows and mumble LUH-vll.

Funny how no one says EVANS-vull. It is universally called Evansville. Same goes for Clarksville. Simpsonville. Jeffersonville.

There is no vull or any other bull. They’re villes.

Everyone in town correctly hits the “ville” in both Taylorsville Road and Shelbyville Road.

When some yokel mealy-mouths the name of LOO-uh-vull, it is simply a case of slurred speech. The listener is getting a country boy’s twang on a defined set of syllables. 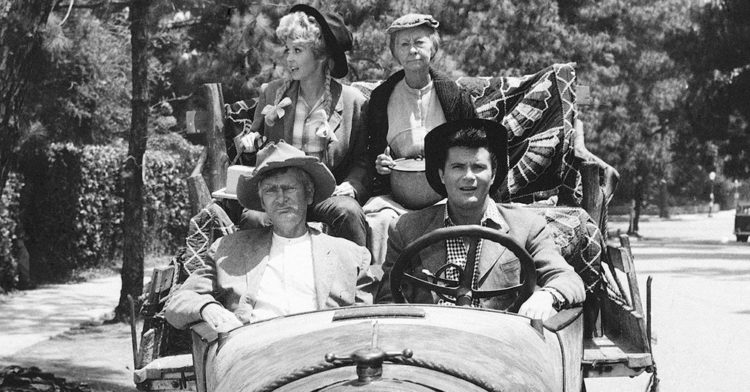 How hard is it to say Louisville? Louie + ville = Louisville.

The city is named for King Louis XVI of France. Louis (in French) = Louie. And don’t say that you don’t use French terms. Ever used the words rendezvous, champagne, or Chevrolet? You didn’t Americanize those words to say ren-DEZ-vows, cham-PAG-nee, or chev-row-LET, so you adjusted to French pronunciations.

For anyone who contends that L-o-u-i-s is pronounced LOO-uh, please explain why no one calls the Missouri city with the arch Saint LOO-uh. Lou-uh-vull people refer to neighboring cities as “Innu-napliss” and “Cin-su-nadda,” alien pronunciations in those actual cities.

The first half of our city’s name is pronounced Louie. The same mushmouth that produces LOO-uh-vull usually spits out other hillbilly staples like VEE-hick-el, ADD-dress, DEE-tails, and IN-shurnce.

As for the second half of Louisville’s name, when would the letters v-i-l-l-e ever sound any different than VILLE?

The front of your car has a grille, not a grull. A doctor prescribes a pill, not a pull. Darth Vader is a villain, not a VULL-in.

No one speaks of our population as Loo-uh-VULL-uns; we’re Louie-VILL-yans. The city’s nickname is The Ville, not The Vull.

Louisville’s inability to enunciate its own name stems partly from a lack of leadership. Greater Louisville, Inc. surrendered long ago by touting a list of 5 different pronunciations of the city’s name, followed by the cop-out slogan “Your kind of place, any way you say it.”

It’s the broadcasters that are perplexing on this issue. They are professional announcers who prize their pronunciation and elocution skills, yet a majority of local broadcasters dumb down their skills and mimic locals by saying Loo-uh-vull. Oddly, they don’t similarly patronize the residents of Shively and Highview by imitating the southern pronunciations of their communities. (HAH-view and SHAH-vlee).

Let’s separate the posers from the precisers:

Broadcasters who cave in and say LOO-uh-vull include Rachel Platt, David Scott, Elizabeth Woolsey, Claudia Coffey, Andy Treinan, Monty Webb, Melissa Swan, Tony Cruise, Matt Hobbs, Scott Reynolds, John Belski, and Dawne Gee. Since they’re in the business of speaking clearly, it must be assumed that they’re “reaching out to the regular guy” by dumbing down their own skills.

Most national correspondents opt for the elocution-driven LOUIE-ville, although some sports announcers come to town and quickly adopt the hillbilly version to placate the unwashed.

Louisville seems to be unique in its ability to crush newcomers into talking hillbilly. Notice that professional broadcasters in New Orleans, Boston, New York, and Norfolk do not patronize their local viewers by saying “Nawlins, Bah-stun, Nu Yawk, and NOF-fuk” on the air.

The most laughable display of Poser Broadcasting is on WVEZ-FM, which broadcasts a professional jingle with people singing “Loo-uh-VULLLLL!” The gifted singers (whose #1 talent is to crisply enunciate every single syllable) are directed to intentionally slur a station identification jingle.

Any playlist of songs with Louisville references are mostly of the LOUIE-ville variety. Willie Nelson’s “8 More Miles to Louisville,” Rick Bartlett’s “Louisville, KY,” and Hazel Miller’s “Look What We Can Do, Louisville,” come to mind. A few hip-hop raps from recent years use “LOO-vull.”

A Southern accent is beautiful when it melts the corners of elegant words. But Louisville is a particular set of standard sounds. LOUIE + ville. Enough of the Dukes of Hazard pronunciation of Louisville, let’s treat our great city with a loud and proud correct name. LOUIE-ville.

I revisited this previously published column after reading this piece on the editorial page of The Courier-Journal:

What’s in a name?

“You like potato, I like potahto …” So wrote the Gershwin brothers about the funny way people can take the same word but pronounce it differently. There were many others: Tomato, tomahto; oyster, erster; bananas, banahnas; Havana, Havahnah …”

They could have added the word Louisville to their list.

This endless debate — is it Lou-ah-vul, or Lou-ee-ville, or Louise-ville — has been going on since the settlers pitched tents near the Falls of the Ohio. But by 97 years ago, it had become enough of a dispute that someone named W.A. Gunn of Lexington sent a letter to the Filson Historical Society noting “most people [call] it Louisville, English style, but many [give] it the French accent with ‘s’ silent.” He asked the group to discuss the matter and decide which was proper. On July 30, 1913, in a response, the society, then known as the Filson “club,” announced that they preferred “Looevill.” 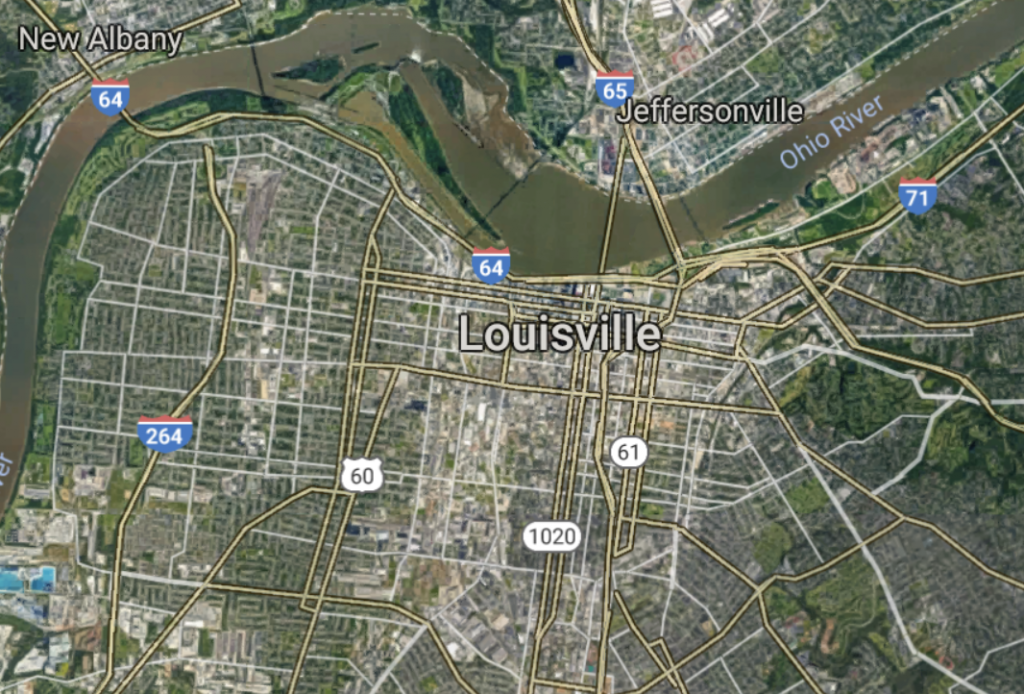 Never takes sides against the family

This is how we do it