Skip to content
You are here
Home > Uncategorized > St. Stephen Martyr football: we were champs 50 years ago 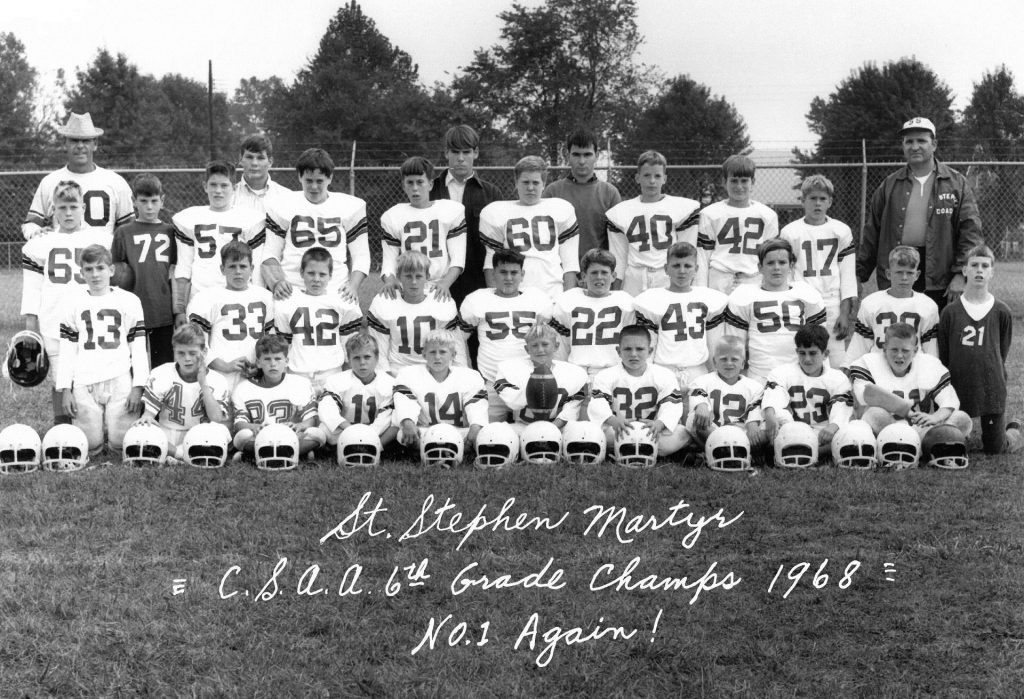 My St. Stephen Martyr boys were perfect. We didn’t all get straight As. Some of us sassed teachers and earned detention. Others screwed up in their personal lives but when it came to football, we were dialed in.

We practiced hard every afternoon. If Coach Don Kalbhin thought we were slouching, he’d order our dads to line up their cars and turn on the headlights so we could keep practicing after sunset. Our dads deferred to the coach’s wishes.

The reward unfolded through the course of the season. Our little football team was perfect in 1968. We beat all challengers, including the Holy Family team listed below to win the Toy Bowl. 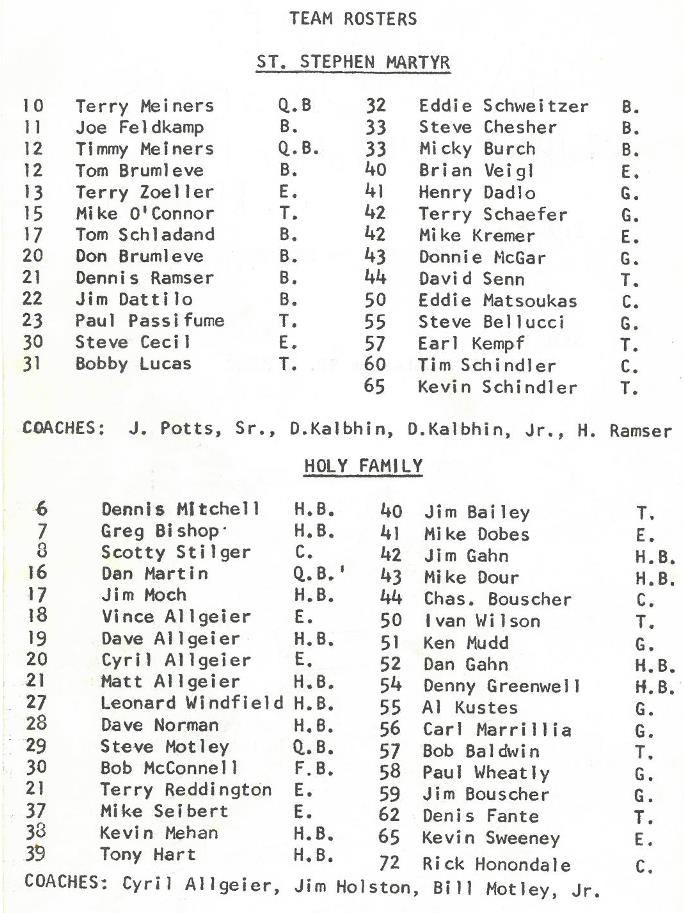 It would be the only championship experience many of us would ever embrace. At least four of the St. Stephen Martyr guys have died, one by his own hand. Another teammate spent time in prison. Several have struggled with chemical dependency or mental illness.

When I bump into a teammate by happenstance, I ask for an update and always hear great things about their current status. It delights me to see any of my teammates enjoying life so many years away from our innocent grade school days.

Plenty of us seem to be doing great or something close to it. Dr. Henry Sadlo (pictured on the far right of the front row) is still my best friend. Ted Schaefer (#42 in the middle row) and I just met for lunch last week. My brother Tim’s (#12) successful business is right down the street from my radio station. I saw Don Brumleve (center of the front row holding a football) a few days ago. 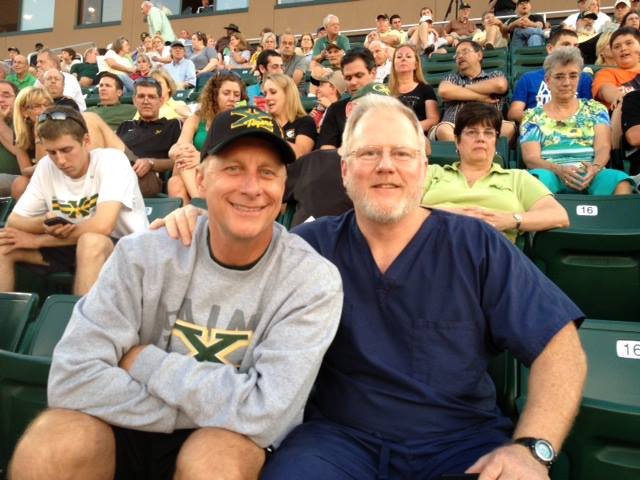 Dr. Henry Sadlo and I communicate almost daily and always end phone calls by telling each other “I love you.” We could never have imagined exchanges like that when we were kids.

I miss Mike Kremer (#42 in the back row), my college roommate who passed a few years ago from medical complications. When we were at UK, we actually made a pact about things we’d like the other to do if one of us died young. It’s not fair but we celebrated life while we had it.

We, the St. Stephen teammates, constantly laughed, teased each other, worked hard, celebrated our triumphs, and consoled each other through challenges.

Great guys, one and all. God bless all of these men. No matter what obstacles confront us, we can always reflect on that perfect year. 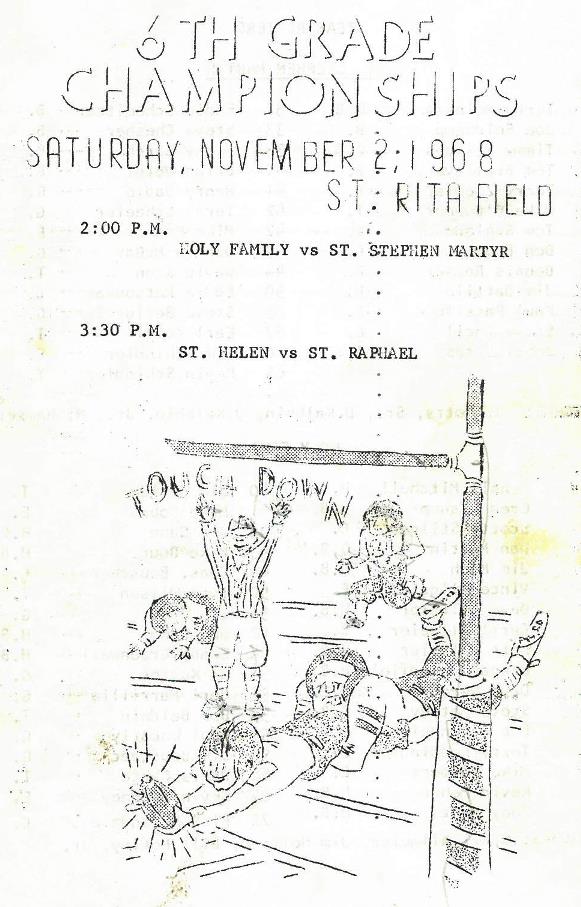 The team photo will appear in this year’s Catholic School Athletic Association Toy Bowl program with the following copy:

Led by Coach Don “Rock” Kalbhin, these gallant St. Stephen Martyr 5th and 6th grade teammates hammered Holy Family 28-7 to win the 1968 Toy Bowl. Neighbors danced in the streets for days. Germantown barkeeps poured free brews for everyone who was at least 15 years old. Fearing that the victory was a sign of the Apocalypse, many spiritually adrift adults returned to church and put money in the collection basket for the first time.

Since a Google search rendered no game stats, the trio of Terry Meiners (10), Tim Meiners (12), and Henry Sadlo (front row, far right) humbly remind historians that they scored ALL of the points, made ALL of the tackles, kissed ALL of the cheerleaders, and used ALL their First Communion money to hire Steppenwolf for a victory concert in the school cafeteria.

And that is truly how it happened 50 years ago. Happy anniversary, teammates. If your memories are slightly different, please email your game recap to terrymeiners@iheartmedia.com 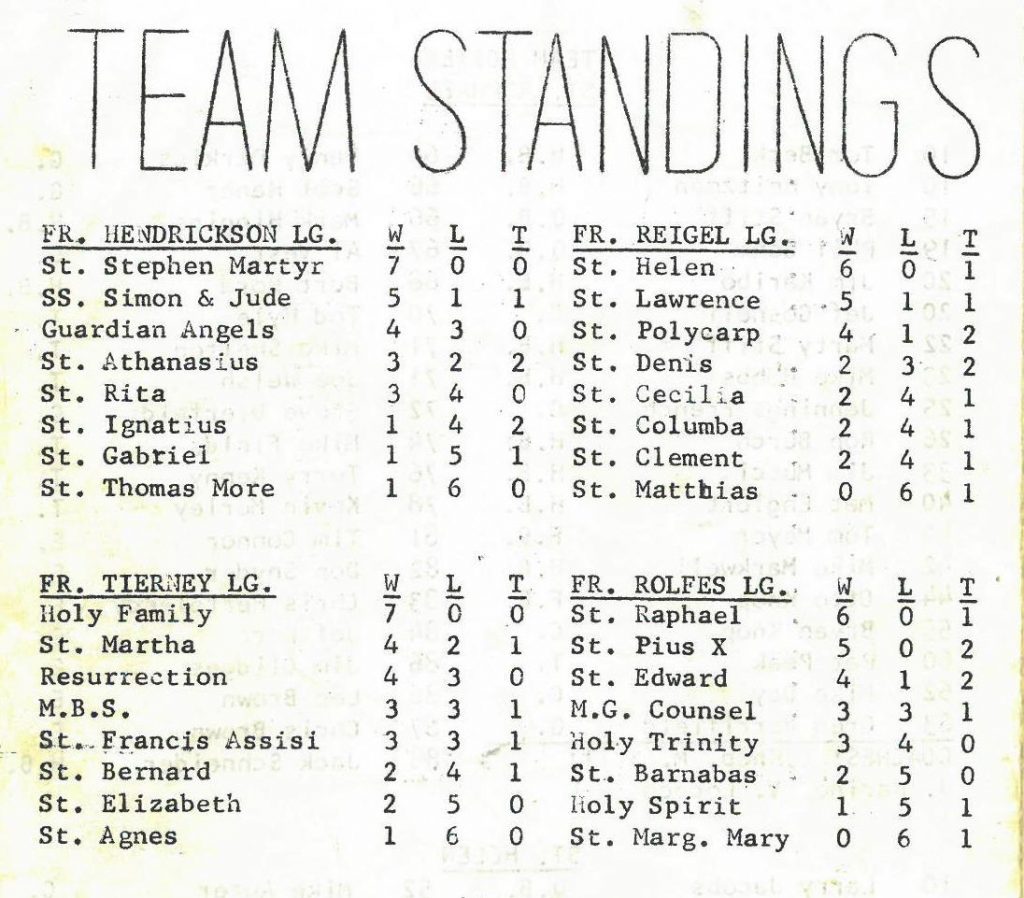 His nickname is Dump Truck

It takes stupid money to eat in the suite

How in the world did no one know Colonel Sanders in 1963?

It’s the laziest time of the yeeeeeeeeaaaaaaarrrrrrr