Skip to content
You are here
Home > Optics > My homely, undeveloped, uneducated 17-year-old great grandmother was nearly WAP-en-ized by local toughs in 1884 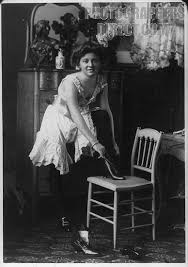 Ludwina “Minnie” Katzenberger was my great grandmother on my dad’s side. In 1884, a few women tried to pull her into working at a house of ill repute when she was 17 but she “would not permit” when a man tried to “take liberties” with her.

The Courier Journal article posted below states that Minnie’s father testified against the other women and the men at the prostitution house. It sounds as if he wasn’t exactly sure how old his daughter really was at the time. The reporter described my sweet great grandmother as “rather homely, undeveloped, and uneducated.”

Both father and daughter Katzenberger were from Sandberg, Bavaria so that means they moved to America sometime after her birth in 1867.

Both of their headstones are in St. Michael’s Cemetery off Barrett Avenue in Germantown.

My son Simon also found this 1898 Courier-Journal piece on another shady Katzenberger. We are not sure if this bird thief is actually one of our ancestors but he sure sounds slick enough to earn the title.

The real world is arresting

We Can Literally Work It Out

Memphis exported some blues to Louisville