Skip to content
You are here
Home > Uncategorized > Life is good: Gov. Bevin uses his interview with me to illustrate his pro life message

A federal judge will soon rule on a lawsuit challenging a Kentucky abortion law. The state legislature passed HB 454 with bipartisan support. It bans D&E (dilation and evacuation) abortion procedures in the second trimester of a pregnancy.

The ACLU claims the administration of Kentucky Governor Matt Bevin is trying to end second trimester abortions. The governor’s team says that less cruel methodologies are available although some medical professionals say they are more dangerous for the mother.

Gov. Bevin (or his social media team) took a recent radio interview with me to reissue the government’s stance on the lawsuit just as the trial ended.

Yesterday, we wrapped up a weeklong trial defending HB 454 against out-of-state lawyers from the @ACLU.

That anyone would consider it appropriate to dismember a LIVING CHILD as part of an abortion procedure is sadistic and barbaric.https://t.co/O9VnnVXilC

This Courier-Journal photo uses the negative labeling of “anti-abortion” to describe the protesters instead of the positive phrasing of “pro life” as is commonly applied to the “pro choice” constituency. 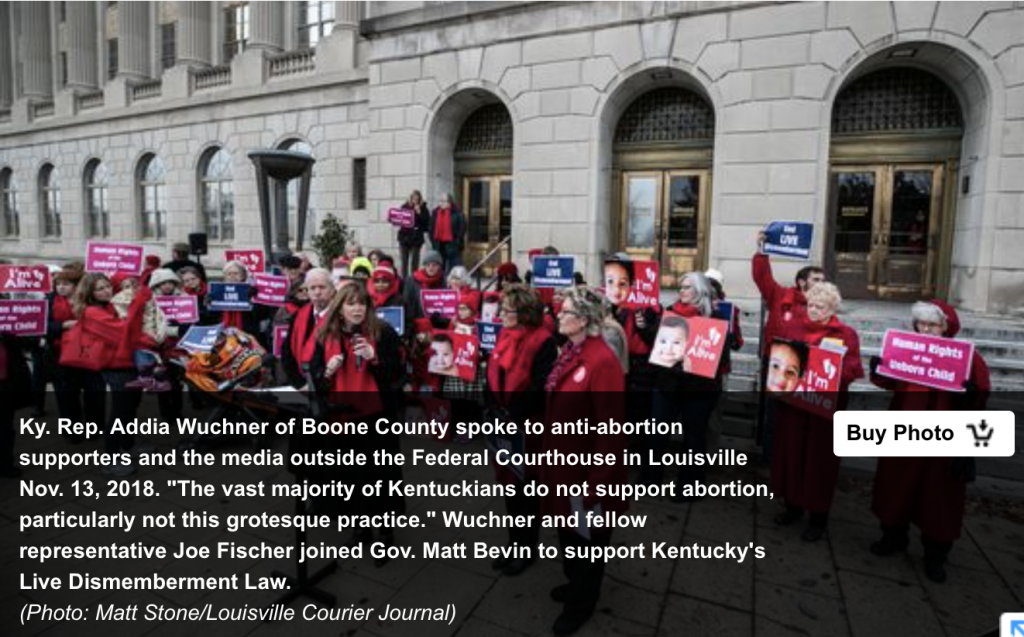 HB 454 effectively put a stop to this gruesome practice in Kentucky.

Let the people of Kentucky make their own laws.

Listen to my full interview on the subject with @terrymeiners, above. #WeAreKY

Kentucky has one remaining abortion clinic. A ruling will come later from Chief District Judge Joseph McKinley Jr. Both sides have noted that an appeal is inevitable.

Cats lose first of three in Christmas Murderers Row – The Beasman is devastated with Loserville looming ahead.

Everyone needs a holiday from weighty matters