Skip to content
You are here
Home > Uncategorized > Life is good 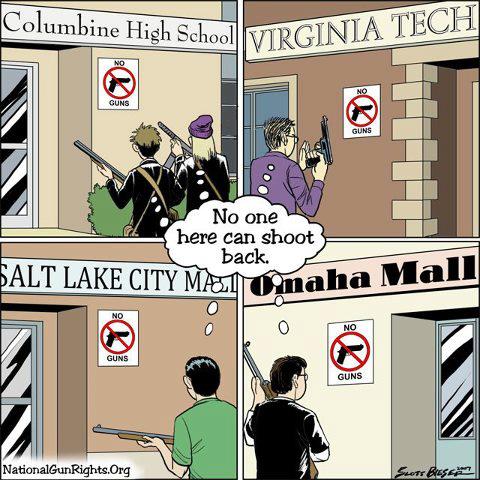 This drawing illustrates the response from the DON’T CHANGE ANY GUN LAWS crowd. Point noted, although it doesn’t account for any open area gatherings. Tailgating, anyone? 200 people lined up for the newest iPhone? 30,000 marathon runners?

The truth is that our society must change, and that means addressing the tsunami of military grade weapons available to people.

And don’t get hung up solely on mass shootings. Every singular shooting is a crime against humanity. Here are some local names for you: David Whitlock. Yalanda Parrish. Michael Bishop. Mahmoud Hindi. Darren Pickerill. Steven Pettway….and a thousand more. Out of control people exercising their “rights.”

It’s time to address how to improve our country so that every open air stroll doesn’t turn into a security event. Stop defending an indefensible climate of killing under the guise of thwarting tyranny. The Declaration of Independence lists Life ahead of Liberty and the Pursuit of Happiness.

Jacob Zimmer
Yesterday at 11:29am near Louisville

·
The same tired old arguments about gun control, the Second Amendment, violence in the media, God in schools are USELESS.

We must first understand the difference between “causation,” “correlation” and “influence.” The suggestion that a law or image directly causes or stops violence isn’t true, but the combination of multiple influences does.

Of course the removal or application of any one suggestion will not completely eliminate the problem, but we can slow and hinder the various activities that lead to massacres. Sitting idly by refusing to debate has clearly NOT worked.

There is waaaay too much violence in the media. We DO glorify it and it should be cut back. Ratings are helpful and should be enforced. Producers should self-censor.

There is no need for semi-auto rifles and double digit magazine clips. They should be banned. There should be serious background checks and waiting periods for handguns. This is not an infringement on constitutional rights, this is common sense.

Can criminals still get illegal items? Yes, just like drug users. But should heroin and cocaine be sold at Walmart? Should hand grenades be legal? Of course laws work to stop most people most of the time.

Guns don’t kill people, people kill people. Yes, so make it a LOT harder for them to have access. Our soldiers in Iraq and Afghanistan confiscate guns and bomb making material from would-be terrorists. Why? To make it harder for them to kill. I WISH the nut job in CT had a knife. Twenty first graders would, although badly injured, likely still be alive.

School can of course teach morals. The golden rule is in every major religion. Principles can be taught without isolating religious minorities. We need MORE money for public schools and mental health care, not less.

Arming teachers is as absurd as suggesting that citizens should wear shoe bombs on airplanes to stop shoe bombers. Only in the movies does a hero with a single shot take out a maniac with an assault rifle. Remember, owning five guns didn’t save Nancy Lanza from being shot to death. In fact, her own weapons were used against her and then used to wipe out children.

Over 30,000 people in the US are killed by guns a year. Any one law will not eliminate all deaths, but common sense measures can reduce the number of deaths. If various measures reduce that number by a third, then we have saved 10,000 lives. Yes, some maniacs will still get deadly weapons and still kill, but that is an absurd argument in favor of doing NOTHING.

We have cut back the number of cigarette related deaths without banning cigarettes. You can still suck in poisonous carcinogens, you just can’t take others with you. We don’t have to ban all guns, but we can make common sense restrictions.

Quantity of ammo can be restricted. Gun ranges can sell ammo and rent rifles on an as-used basis. It’s not like there are any other places where you are going to use dozens of rounds. Most people rent ice skates from the rink rather than own them – why? Because the rink is the only place you use them.

I will GLADLY pay higher taxes if it means all Americans can have better mental health care. I will GLADLY live without an assault rifle if it means it will be harder for maniacs to get one. I will GLADLY go through a background check to get a hand gun if it means those with mental illnesses will be denied. Are you not willing to make any sacrifices if it can save first graders from being shot to death?

Our nation’s reaction after Columbine, VA Tech, and Aurora was to do nothing and clearly that has not worked. It’s time to take steps to reduce gun violence.

—Jacob Zimmer is the owner of Zymage event production and photography

It’s universally called The Ville, not The Vul

In a galaxy far, far away