Skip to content
You are here
Home > Uncategorized > TV meteorologist Jeremy Kappell on uproar from his mangled words, the gutless station manager, the callous Rochester mayor, love from Al Roker & Louisville colleagues, and what happens next

Jeremy Kappell was fired from WHEC-TV in Rochester, New York after he inadvertently said “Martin Luther Coon King Junior Memorial Park” on the air. In a radio interview with me tonight, Kappell said he never even heard his own mistake.

Truth of intent didn’t get in the way of a nice public stoning. Social Justice Warriors assembled the internet mob and —BOOM!— Kappell was fired.

Ill-informed EMOTIONAL ALL CAPS INTERNET RAGING prevails over logic once again. Did anyone think to ask Jeremy Kappell’s co-workers, neighbors, or other people in regular contact with him ask about his racial temperament?

I worked with him. He’s one of the kindest people I’ve ever known. His WHAS-TV workmates Ben Pine and Reed Yadon were both asked if Kappell ever made racial or demeaning comments in private over the many years that they’ve known him. “Never” was the reply from both of the Louisville meteorologists.

A TV meteorologist in Rochester, New York, was fired after being accused of using a racial slur on air.

Now, he’s speaking out and saying it was an honest flub – that he mixed words by talking too fast, @MorganRadford reports. pic.twitter.com/K12ArGlNWP

Two days after the tongue twister, Kappell was summoned to the office by management. “We’ve got a problem,” Kappell was told by the news director.

Next, the WHEC-TV station manager made Kappell sit outside his office for four hours, then called him in and suspended him, then fired him several hours later. Reingold then went on the air and groveled for the public’s understand that such racist, abhorrent behavior should never have been allowed to air.

What person would want to speak live on WEHC if her/his boss has no spine and does not allow for the possibility of making an innocent mistake? Why wouldn’t Reingold call former colleagues at WHAS or WDRB to get some insight into Kappell’s character?

Because he is too gutless to stand up to internet trolls and a mayor who has sought (and been granted) forgiveness for her own missteps. It was easier to use Kappell as a scapegoat.

One would think Mayor Lovely would understand forgiveness after watching her husband mature after his teenage felony crime of driving the getaway car in a $900,000 jewelry store heist.

Mayor Lovely herself was forgiven for issues related to nepotism and motorcade speeding that endangers other motorists.

But no forgiveness for a TV meteorologist babbling a spoonerism on the air. There’s political gain to be made from torching his existence.

Once the Lovely mayor stomped her feet, WHEC management caved to political pressure and Kappell had no shot. He was not allowed to give any explanation or apology to viewers, but NBC’s TODAY Show aired his story a few days later. WHEC is an NBC affiliate so Kappell’s explanation got on the air anyway.

Daughter of MLK says @JeremyKappell shouldn’t have been fired but insinuates that he uses racist language in his everyday life. So, thanks for for the hug followed by an unwarranted punch in the face. 👎🏾 https://t.co/mIgqCVoU5Q

Here’s the rational response from an African American linguistics professor who diagrams how the error happens naturally to all of us. But then read the comment thread packed with vilification for Kappell from predominantly white Social Justice Warriors. None of them is a broadcaster who understands the demands of freeform narration. They’re just virtue signaling internet trolls.

"To condemn someone to unemployment for simply blurting out a sequence of sounds that parallels a slur, even in an awkward context, is a kind of performed delicacy," argues @JohnMcWhorter: https://t.co/ALXpiWiCAc

The daughter of MLK was not especially kind either. Dr. Martin Luther King Junior’s daughter Bernice told TMZ that she didn’t think Kappell should have been fired. She thinks he needs “rehabilitation,” the assumption being that he hangs out where racist terminology flows freely. How else to explain his spoonerism?

Here’s the explanation, doubters. HE MISSPOKE! But, for those who thrive on division, the race hustling card must be played. For many, there is no such thing as a simple odd delivery of ad libbed verbiage. It MUST BE RACISM, not just an innocent slip of the tongue!

NBC weatherman Al Roker is one of the greatest ad lib performers in television history. Roker, who has made his own racial discrimination claims, came to the defense of Kappell after the TODAY show ran the story. 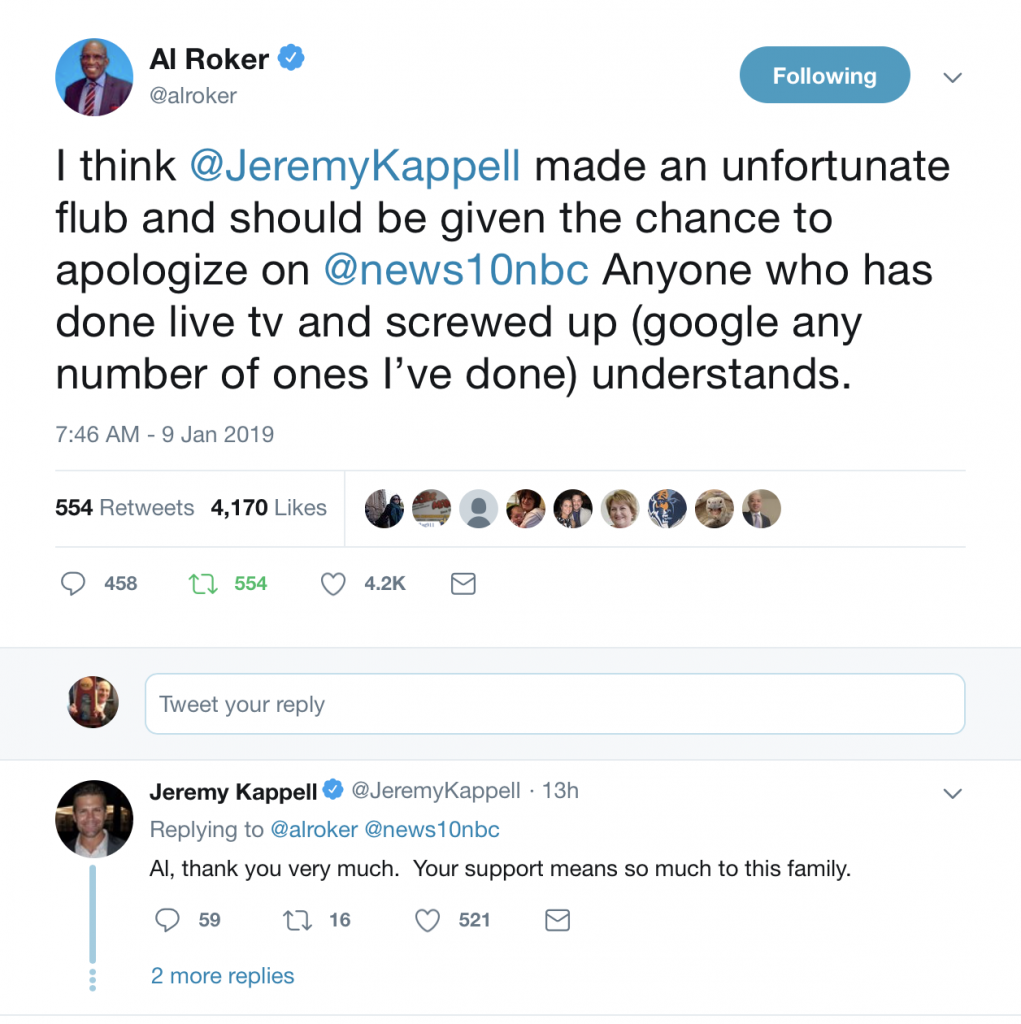 One of Roker’s black co-hosts, Craig Melvin, also accepted Kappell’s explanation by noting that everyone on the air screws up their words.

Still, a large number of people are CONVINCED that they know what’s in Kappell’s heart, and that he is a racist who just let the word “coon” slip out naturally from overuse in his private life.

African American radio personality Charlamagne Tha God went on his nationally syndicated show to weigh in on white man (“jar of mayonnaise”) Kappell, claiming that he’s obviously a racist who easily uses racist slurs. Charlamagne is the very same man who was once arrested for having sex with a 15-year-old girl, but the charges were reduced when she refused to testify.

This good dude Charlamagne crushes Kappell in the same radio routine where his weather parody character uses the N-word three times. (they are bleeped out in the video below)

This kind of asinine mischaracterization is exactly why Kappell and his wife Lisa are repeatedly telling their story to media outlets across America.

Rational people are hoping for best for Kappell. Those who gravitate toward guilt-before-evidence when a situation involves a white person supposedly demeaning a minority, are enjoying Kappell’s pain.

Despite it all, Kappll is grounded by his faith. 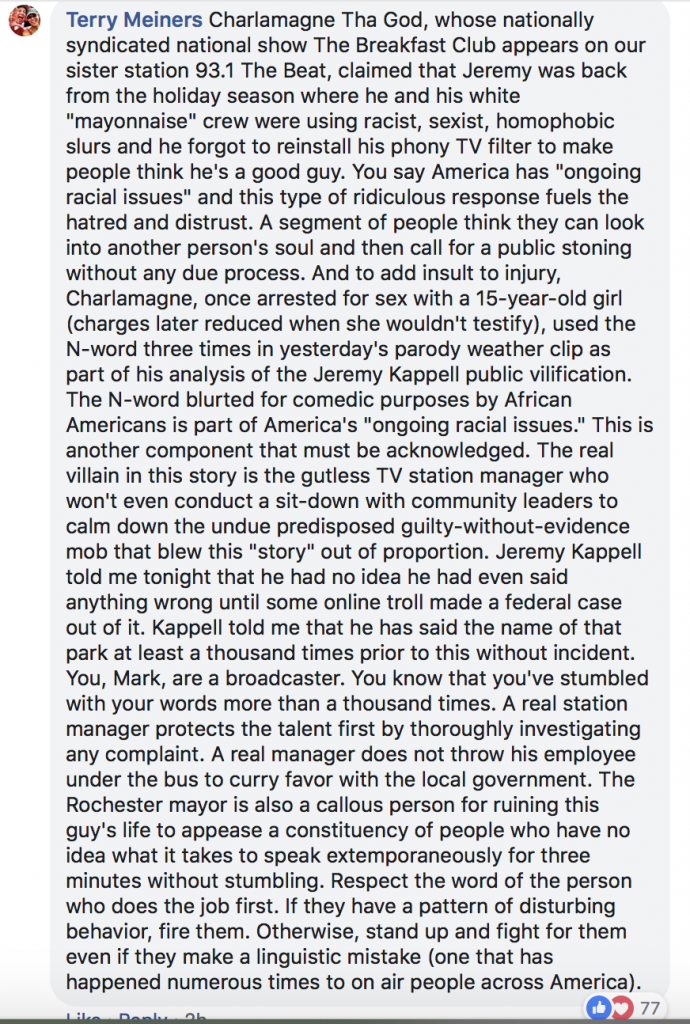 Finally, here’s a rather lengthy but accurate take on societal insanity when race mixes into a simple verbal flub. Matt Christiansen is an online pundit who, like me, throughly researches subject matter and presents abundant evidence. However, very little of our work is acknowledged because snowflakes like the Rochester mayor don’t want to hear facts or logic from white guys. In their minds, we are the problem.

Emotion overrules logic in our society of subpar standards.

Intellectually bankrupt, grievance-based leadership eventually spins into chaos when no one is heard because everyone is screaming.