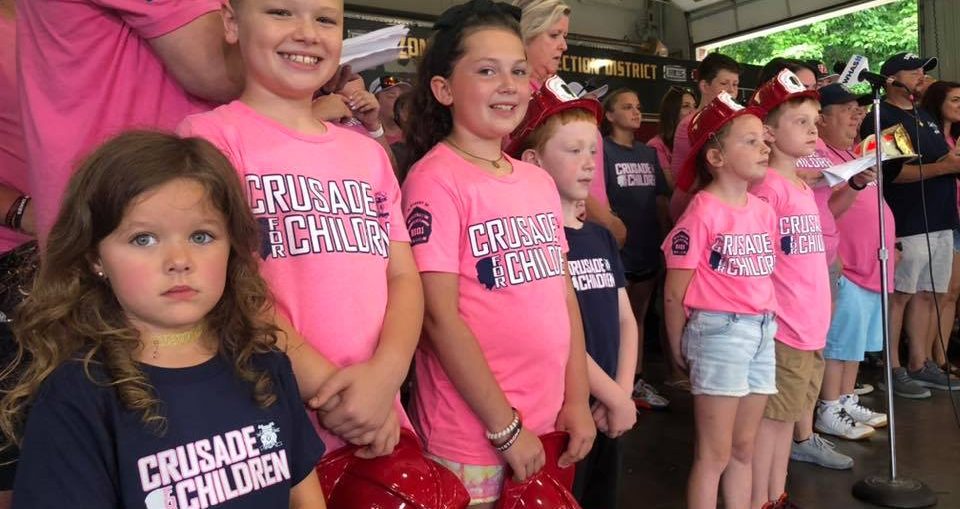 There’s nothing in America quite like the WHAS Crusade for Children. It’s the most successful ongoing telethon in the United States. Firefighters raise more than half of the money to provide assistance for special needs children and their families. Other huge donations come in from local companies, churches, civic groups, and individuals.

It’s an incredible testament to the generosity of Kentucky and Indiana citizens. Thanks to every person who donated to this annual miracle!

official press release from the Crusade for Children

For immediate release: June 6, 2021
(Louisville, KY) In an emotional weekend, honoring many fallen firefighters, communities in Kentucky and southern Indiana came together once again for the 68th Annual WHAS Crusade for Children to make life better for children with special needs. The final tote board tallied $5,100,000 as America’s most successful local telethon concluded with the traditional singing of “God Bless America” just before 7:00pm (EDT) Sunday, June 6, 2021. Since 1954, the Crusade has now raised a cumulative total $200 million.

“The WHAS Crusade for Children continues to be a great demonstration of caring and coming together for the greater purpose of helping children with special needs. After an especially tough year with significant losses, we are amazed by the dedication of the firefighters and volunteers. A huge thank you to all who gave, the firefighters who worked tirelessly to collect, and the dedicated volunteers. Every penny really makes a difference, and we are so grateful for the continued generosity of this community,” said WHAS Crusade for Children President & CEO Dawn Lee.

More than $200 million for the kids
In its first 68 years, the Crusade has raised more than $200 million for children with special needs. One hundred percent of all donations raised Crusade weekend are returned in the form of grants to agencies, schools and hospitals that make life better for children with special needs in Kentucky and southern Indiana.

It takes a cast of thousands for this annual miracle, from individual donors dropping pocket change into boots at firefighter roadblocks to schools hosting penny challenges to corporations offering payroll deduction.

The Leaders
Nearly 60 percent of donations are collected by about 200 fire departments in Kentucky and southern Indiana. Fire departments got involved with the Crusade in 1956 when Pleasure Ridge Park Fire Chief Ernie Bohler brought $400 on the Memorial Auditorium stage in Louisville and challenged all fire departments to get involved.

Pewee Valley Fire Protection led the way for the Kentucky fire departments with $259,564.57.

LG&E and KU PPL Companies led the community organizations with $409,064.00 in contributions.

So many to thank
The annual Crusade Internet/radio/telethon kicked off at 1:00pm (EDT) on Saturday, June 5 and aired in its entirety on 840 WHAS Radio, WHAS11 and worldwide on WHAS11.com. WHAS11.com provided LIVE video streaming of the entire broadcast visible anywhere in the world. WHAS11 also simulcast the Crusade weekend program on YouTube and Facebook Live. Updates were posted all weekend long on WHASCrusade.org, and donors across the country made secure online donations.

In addition, WBNA-TV 21.1 in Louisville aired live broadcasts 12:30pm to 6:30pm Sunday, June 6, from the Kentucky cities of Elizabethtown, Shelbyville and Bardstown. WBKO-TV in Bowling Green aired remote telecasts from Campbellsville on Saturday and Leitchfield on Sunday.

You can handle these truths