A few days before the University of Louisville football team opened its 2018 season with a nationally televised battle against #1 Alabama, an unnecessary upheaval derailed the focus from football.

Tom Jurich and his loyal son Mark both believe that Tyra “schemed for over a year” to oust Tom Jurich and replace him as athletics director.

Tyra says the Jurich claim is laughable, noting that he was already semi-retired and planning to spend abundant time living in Florida before being pursued by UofL administrators.

Son defends dad. We get it. I even told Mark it was a “badass” message.

The problem is that parts of the Mark Jurich email turned out to be woefully misleading.

Here is the complete email from Mark Jurich to Vince Tyra, who later called it “silly and sad.”

In writing this email, I hope to be clear. It has been my goal to move on – yet you continue to attack my family which gives me no other option than to respond. This email is not about tickets. It is about you and the University dishonoring my father and your blatant disrespect for my family.

If you cannot bear the sight, or rather the optics of Tom Jurich in the YUM! Center or Cardinal Stadium, you are weaker than I thought. If you feel the need to hide my dad in a corner to make yourself feel important or simply comfortable, then so be it — he will do that for you. But you cannot possibly think you can erase him by hiding him in these stadiums. His fingerprints are everywhere. Your coaches still call my dad for advice. Your players still call my dad for insight. Your administration still calls my dad for guidance.

However, this all begs the following questions. Why be so petty? Why not be confident in the leader you think you are, rather than disregard the leader my father has always been? Why not honor him? Why not allow him to keep the seats he has earned after 20 years? These seats aren’t a gift. They were accepted in lieu of a pay raise. You have allowed Jim Ramsey and Kevin Miller (mind you, the athletic dept. accountant and the primary sport administrator for men’s basketball since I was in college) to maintain their seat locations, parking passes and dignity. My father honored Denny Crum with a prominent seat at YUM! for all the great things he did. So why the disparity?

Have you ever considered what my father did for you? He honored the legacy of your father. He was a steward of your money. He provided you with an amazing atmosphere for you as a fan and created a great product for you and your family. So why the continued efforts to embarrass us? My dad’s balance sheet has been on display for 20 years. Would you like for us to discuss yours? Would you like for us to discuss what I did for you at Cardinal Alley?

Or, Vince are you simply out of your league? What do you stand for? How do you look into my eyes moments after my father was placed on leave and say “I will do everything to make sure this University honors your dad”? Can you imagine me treating your son Cooper this way? No, because I never would.

While you were focused on $.79 pom-poms, Tyra jerseys and removing Jurich banners, you should’ve been focused on bridging the gap within our fanbase and supporting our program. The butchering of the NCAA appeal makes me question your agenda. To see the destruction of 20 years’ work in 10 months is heartbreaking. To see our top donors leave is understandable. You can package this however makes you most comfortable, but I question, as should everyone else, are you part of the problem? Is your ego so fragile that you cannot celebrate the man who preceded you?

How quickly one forgets.

Now that I have reminded you, would you like to reconsider your decision? You and I both know that it is never too late to do the right thing.

But sports marketer Mark Jurich misread the room. In what he’d hoped would generate a massive wave of support for his dad’s legacy, the overwhelming response was “please go away.” Read the comments in the Tweet thread below.

I’m sorry my message got lost yesterday — it’s never been about the seats, I know there is not a bad location in either of these beautiful venues. To the UofL fans I offended, I am truly sorry. I’ll be at every home game with my boys — we are excited to support the Cards!

Respondents pounced on the irony of a professional marketing guy admitting that his messaging skills are faulty. And how does publicly throwing venom at a former friend engender trust in any potential client?

The truth is that the Jurich basketball tickets were moved straight across the arena to the other side, taking them out of direct TV camera view. These seats are valued at exactly the same price, with the exact same viewpoint, just directly opposite.

Tom Jurich was paid millions of dollars for a job well done, and given millions more upon his forced departure. The tickets were just a bonus for a multimillionaire who is unlikely to return for a Louisville game.

Tyra says that the Juriches “didn’t do (crap)” for his father, all-American Charlie Tyra.

Jurich and Tyra could have discussed their differences privately but someone leaked the email to a newspaper columnist just before the giant football showcase. The timing showed selfish disregard for the football program and the fan base.

Was this drama orchestrated by a prominent former donor who’s considering a run for statewide office? Other people suspect that Jurich family spokesman Bob Gunnell leaked the email and may have helped in crafting it.

Doesn’t matter now. It was a rude, thoughtless, self-serving distraction that stole limelight away from today’s athletes who faithfully represent the University of Louisville.

BTW, the UofL football team was crushed by Alabama 51-14. Mark Jurich now has a peculiar shame blanket to wear when he returns to see the Cards play football or basketball in his free seats.

Few people cheer for an unappreciative rich guy in free seats. Oh, and can we FINALLY get back to cheering for the current football, basketball, baseball, and all of the other UofL teams?

The Jurich era at the University of Louisville saw unprecedented fundraising and facilities construction and expansion. UofL basketball was #1 on a Forbes list of most valuable college bball teams.

Today UofL is hemorrhaging money and will joyfully sell the Jurich tickets once the severance deal for freebies runs out in several years.

The lawyers who negotiated the Tom Jurich severance package are 100% responsible for not specifying exact seating arrangements for the Jurich family to use or resell.

Premium seats like the Jurich set are still selling well but overall game attendance and ticket sales are falling at universities all across America. Rampant “cut the cord” cable losses reduce TV payouts to schools. The new tax law eliminates the 80% charitable write-off for buying personal seat licenses for games. Suddenly a family or company’s $10,000 PSL is no longer drilled down to $2,000 out-of-pocket.

What do you think is the first to go in a family’s discretionary income bucket? Buh-bye, live sports event. Hello, HD home screen or streaming device.

Old folks are turning away from attending games with rising prices for tickets, parking, and concessions. Millennials seek other entertainment options. Soccer, anyone?

Alumni donations to school foundations are in a freefall.

School revenues may never again reach the levels of the Jurich era. Joining the ACC blasted Louisville into the big time, but even the big schools are struggling with declining revenues.

During that recent UofL heyday, Vince Tyra had to donate nearly a half a million dollars to earn the right to buy the tickets that he still pays for today.

Who sold him that exorbitant ticket package? Mark Jurich, the guy sitting in free seats and complaining about their location. 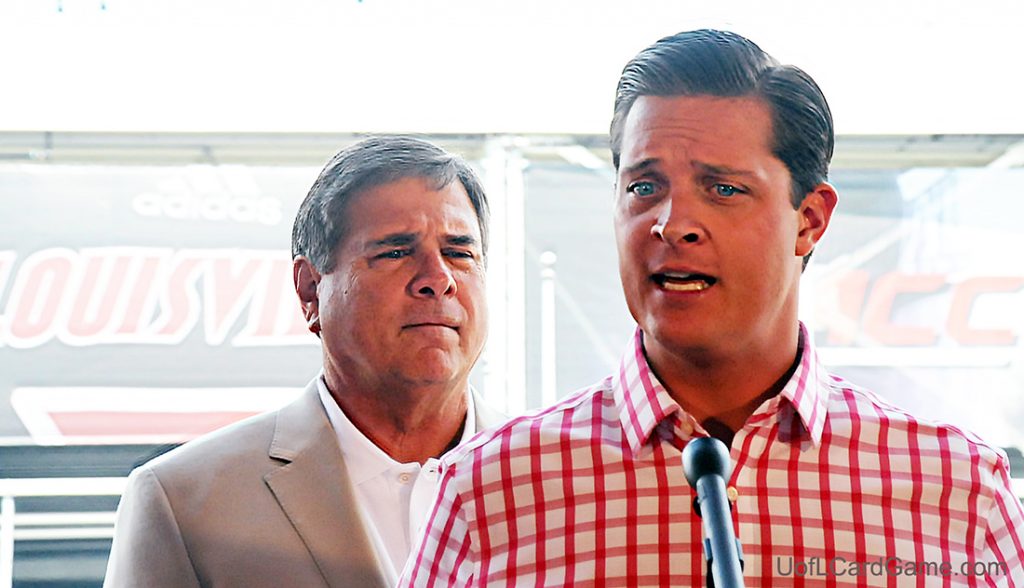 Who enraged thousands of longtime Cardinal customers by pushing their Freedom Hall lower arena seats up toward the Yum Center rafters so that new donors could jump the line and sit down low?

That would be Mark Jurich, whose UofL income was based on his fundraising abilities.

Twisting a Mark Jurich question from his acerbic email, have you ever considered what UofL fan generosity has done for you?

Life is good: Gov. Bevin uses his interview with me to illustrate his pro life message