The Louisville Cardinals roared back from 16 down against Syracuse University to capture the final Big East Tournament Championship. The legendary conference has imploded as most of its members have scrambled to join other conferences. 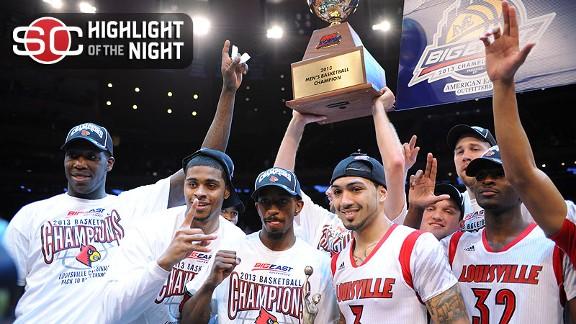 Former President Bill Clinton popped into the Cardinals locker room a few nights earlier after Louisville defeated Villanova. Russ Smith, foreground, and Chane Behanan were unafraid to act a fool around the prez.

Mary and I joined a group of friends to greet the coach and the team at the KFC Yum! Center. They were exhausted from a grueling run through the tournament, a night of celebration, and a few airplane delays getting them back to Louisville just moments before the NCAA Tournament pairings were announced.

>>>>>>>>>Reserve forward Montrezl Harrell, shown below from a January TV show taping, exploded for 20 points and some bruising play in the lane to thwart Syracuse and lead the Cardinals to victory.

>>>>>>>>>>BONUS: Remove the emotion by filling out the BLINDFOLDED BRACKET

Wednesday on a Wednesday