WHATEVER YOUR POSITION, YOUR ARGUMENT IS SAMPLED HERE

No reasonable person wants to take away Americans’ guns for hunting, personal protection, or as collectibles. But personal responsibility must be attached to the decision to be armed.

Following the Newtown, Connecticut massacre of 27 people, including 20 first graders shot multiple times in the head, it’s time America had a serious conversation about who has guns and how to keep them away from mentally ill or criminally motivated people.

Gun enthusiasts are quick to say that it’s “too soon” to talk right after a massacre like Newtown. “Out of common decency” the NRA waited to respond.

If it’s “too soon” after the most recent slaughter of innocents, just roll back to the Aurora movie theater victims. Still too soon? Then let’s go back a year to the shootings of people near Arizona congresswoman Gabrielle Giffords. Every mass killing extinguishes life, so let’s talk about any victims’ souls you think aren’t too soon to address. The point is that it’s time to talk about murderous rampages and the availability of guns to carry out these atrocities.

Newtown notwithstanding, children die by guns every day in America.

ONGOING INTERPRETATION OF THE U.S. CONSTITUTION
The First Amendment provides for free speech, but it had to be more deeply interpreted in later years to address issues the founding fathers hadn’t considered. Obscenity and “shouting ‘FIRE’ in a crowded theater” are two examples of restricted speech. The FCC delivers fines to broadcasters who exercise free speech that violates community standards, none of which are described in America’s founding documents.

Despite gun enthusiasts’ complaints, the Second Amendment is also open to further interpretation to account for societal changes. The only adjustment to the right to bear arms has been to deny convicted felons from gun possession.

NRA’s “meaningful contributions”
A week after the carnage in Newtown, the National Rifle Association responded by suggesting that every American school hire an armed security guard.

NRA detractors immediately recalled the notorious 1999 Columbine High School shootings where two armed, trained law enforcement officers shot at one of the assassins and missed. The 2007 Virginia Tech massacre of 33 occurred with an entire campus police force on duty.

A week after the 2012 Newtown massacre, the NRA blamed “gun free zones” as the root of America’s vulnerability, and blames the media for reporting on massacres as a catalyst for more of them.

The NRA disseminated its information through the very same media it lambasts. And nine days after the massacre, NRA leader Wayne LaPierre appeared on NBC’s “Meet The Press for a vigorous debate where he would not concede to any changes in gun laws.

Does all of America have to surrender to a Wild West mentality where everyone is armed, constantly locked and loaded and ready to kill? 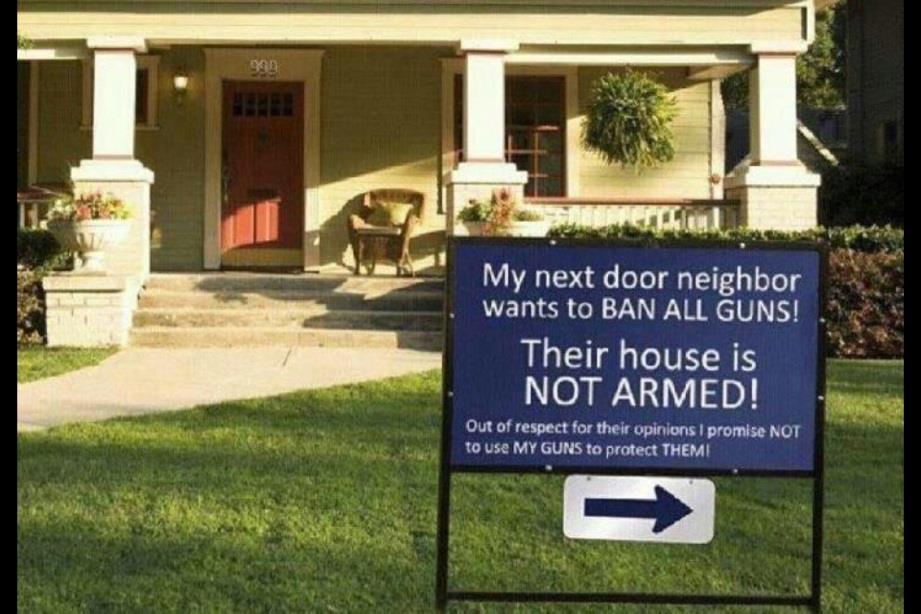 Or is it time to toughen personal responsibility consequences for gun using criminals, guardians of mentally disturbed, and gun owners who don’t lock their weapons from winding up in the hands of both of them?

HiPAA nightmare
The NRA suggests that America open access to a nationwide database of mentally ill people, a process others say is already in place and has failed.

The NRA comments came two days after a press release stating that the organization would offer “meaningful contributions” to assure that another Newtown massacre would never happen again. 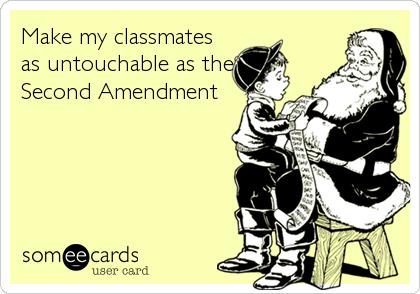 MJ 3 hours ago
If you need an assault rifle with 30, 50, or 90 round clips to protect yourself maybe you just suck at protecting yourself.

JOHNNY MCNULTY 3 hours ago
The only way to prevent planets from exploding is more Death Stars!

MIKE POLK JR. 4 hours ago
Only received 2 death-threats while tweeting through #NRA presser. I think this country is finally turning the corner. #Kumbaya

MAX SILVESTRI 4 hours ago
There were two armed guards at Columbine so it’s weird the NRA didn’t bring those guys up on stage to talk about how well that went.

MIKE DRUCKER 4 hours ago
Someone should tell the NRA that it’s absolutely normal to have a tiny penis.

JEN STATSKY 4 hours ago
Where does a guy w/the name “Wayne LaPierre” find time to make crazy statements about guns in between all the tying damsels to train tracks?

SETH MEYERS 4 hours ago
NRA: If we banned schools there would never be another school shooting.

POURMECOFFEE 4 hours ago
We must fight back against the violent fantasy of video games by making the actual landscape of reality look like Mortal Kombat.

LOLGOP 5 hours ago
I didn’t watch the whole NRA press conference. Did LaPierre end up releasing his hostages?

ERIN GLORIA RYAN 5 hours ago
Can’t wait for the NRA’s new anti-rape campaign where everyone gets a penis.

CHASE MITCHELL 5 hours ago
Just want to point out the NRA’s plan to stop school shootings is literally the plot of Kindergarten Cop.

MICHAEL IAN BLACK 5 hours ago
Oh cool, George Zimmerman is going to be protecting my kids in school.

TRAVIS HELWIG 5 hours ago
“To protect every gun, we must arm every gun with another gun.” -NRA

KEPLY PENTLAND 5 hours ago
I am genuinely shocked that LaPierre’s solution isn’t to arm the children themselves.

BIG-DUMB-CHAD.GIF 5 hours ago
This Wayne LaPierre, he’s really not the sharpest armour-piercing assult round in the clip, is he now.

The NRA claims to have 4 million members who are “moms, dads, sons, and daughters.” That’s a little more than one percent of the population of America. Gun manufacturers give millions to the NRA for its political activism work, resulting in higher gun sales and a level of legal indemnity. Some refer to the NRA as the NRSA for “National Rifle Sales Association.”

Responsibility limitations
Why aren’t gun owners completely responsible for any heinous activity associated with their weapon(s), even if the owner is overpowered or burglarized? When a person buys a pit bull dog or a swimming pool, the owner is responsible for securing its property against creating harm for anyone else.

Gun owners are not held to the same standard. Republicans preach “personal responsibility” for all but somehow that concept stops at gun ownership, although there are limited means to receive monetary damage awards.

Gun enthusiasts are quick to ask why cars, alcohol, and baseball bats aren’t banned, since they can all be used in killing a person.

A car is manufactured to transport a person from one place to another. A baseball bat is built to hit a ball. Alcohol used in moderation is harmless.

A gun is manufactured for one purpose, as illustrated below.

For the gun lobby and gun enthusiasts, this is the go-to message: 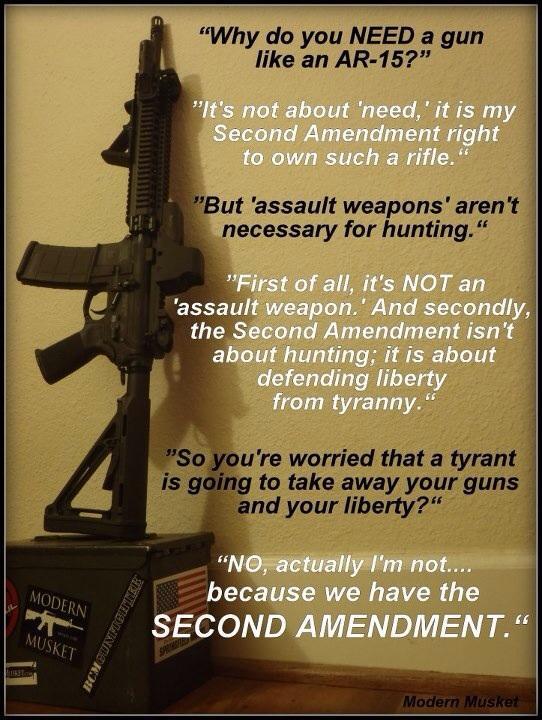 Many anti-gun voices rose up after the NRA’s self-serving spokesman essentially told America that the only way to protect America was acquire more guns. VIDEO OF NRA PRESS CONFERENCE

Did the Founding Fathers intend for the 2nd Amendment to be ever expansive, so as to include combat level weaponry?

IN KENTUCKY, BASKETBALL IS KING. BOTH CALIPARI AND PITINO SPOKE OUT FOLLOWING THE NEWTOWN MASSACRE
Rick Pitino and John Calipari both followed Jim Boeheim’s lead and addressed the need for heightened gun control. 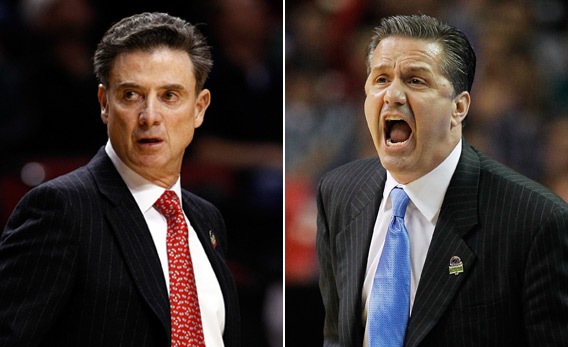 NRA MONEY IN KENTUCKY POLITICS
Just as Kentucky’s prominent basketball programs rely heavily upon well-connected donors, so do the Commonwealth’s politicians rely upon NRA donations to their campaigns.

Surprisingly, Tea Party favorite U.S. Senator Rand Paul has not accepted money from the NRA. He has stated that the Newtown massacre is a “mental illness problem” and not a gun problem. That stance can’t hurt his potential 2016 presidential campaign with the NRA crowd.

THE JASON BOURNE FANTASY
Many concealed carry advocates contend that the Newtown shootings would have been avoided or scaled back if the school teachers had been armed. They will tell you about various shooting situations where a civilian with a weapon thwarted or reduced the kill count because a law abiding citizen pulled a weapon.

Surely some carnage has been avoided by armed citizens, but how many catastrophic gun incidents have been caused by guns left within the reach of children playing? How many legal guns have been stolen and subsequently used in crimes? How many legal gun owners have been overpowered and had their weapon used against them?

In light of the Columbine catastrophe where two trained officers took shots at an assassin and missed, why do lightly trained civilians think they’ll shoot with more accuracy in a chaotic shooting situation? How does an armed civilian come upon a shooting scene and quickly determine if another person with a gun is a perpetrator or another civilian trying to thwart a shooter? No one is identified by a uniform so how does the well-intentioned gun owner know whom to shoot, all in a lightning quick crisis situation?

It’s ludicrous to think an armed mother eating a salad with her child in a restaurant suddenly hears a noise, then immediately morphs into the Hollywood character Jason Bourne, a CIA trained killing machine. She instantly discerns that an armed person wearing body armor is not a law enforcement person, dives for cover, quickly pulls her revolver and neutralizes a killer while avoiding shooting innocent bystanders.

The reality is that an armed civilian makes the situation more dangerous by drawing instant fire as she fumbles for her weapon, perhaps discharging it into innocent people scrambling for cover.

Imagine the heightened danger of teachers with guns, particularly when a weapon winds up in the hands of a mischievous school boy trying to impress his friends or exact revenge on a rival.

Without continuous SWAT-like training, the civilian-turned-Jason-Bourne fantasy is more likely to increase a body count because of incompetence or simple failure to secure firearms from getting into the wrong hands.

PRIORITIES: THE MEDIA PUNCHING BAG
Many people feel as though media attention is misdirected, citing selective American carnage without global perspective. (see below) Others contend that mass shooters crave attention from media follow up that gives a dead shooter a notorious legacy. That’s unknown because silenced insanity doesn’t leave a road map. 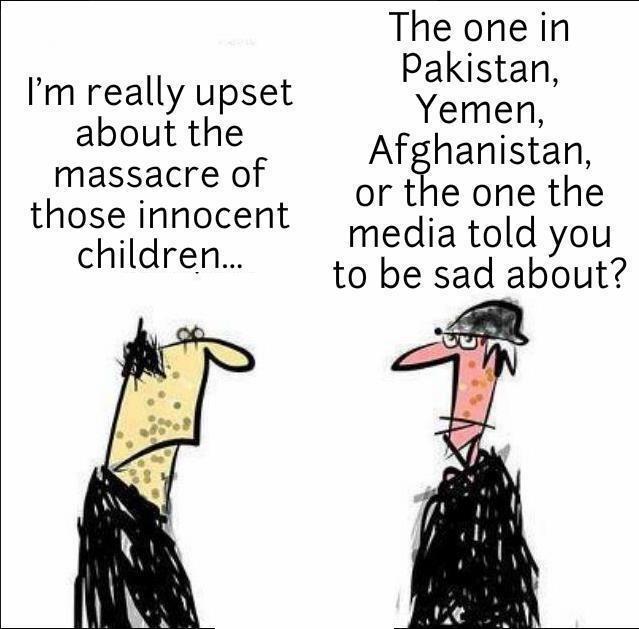 THE LAST WORD:
New York City Mayor Michael Bloomberg emailed reporters after the NRA’s unsympathetic press conference following the Newtown shootings: “Instead of offering solutions to a problem they have helped create, they offered a paranoid, dystopian vision of a more dangerous and violent America where everyone is armed and no place is safe.”

Beyonce sings about her money, nostrils, sex rewards, plus a bit of cop bashing

Strip club patron sues stripper: “How do I get my booty and boobs back?”