WHAS is the most powerful radio signal in Kentucky. It can be streamed worldwide but its over-the-air signal pierces atop most of the contiguous 48 United States. WHAS Radio will turn 100 next July, pumping out news, interviews, and information 24/7.

Whether we’re talking to Dr. Dunkenstein, Dr. Fauci, or Dr. Pepper, we are delivering audio and video content to keep our community informed. Thanks for hanging with us for our first century!

That’s our boy Ian Vertrees above. He’s a deejay on WQMF and the daily producer and voice contributor on the Terry Meiners Show. The iHeart machine moves because it is fueled by strong employees.

#WHAS100 🎧🎙 @MandyConnell is one of the greatest talk show talents in America, once dominating midday ratings on @840WHAS. We spoke today about radio, Colorado, and the serendipitous airplane conversation that changed her life. ❤️

As we approach WHAS Radio’s 100th birthday next July, let’s visit with more of the people who’ve been a part of its legendary status in Kentucky media.

#WHAS100 🎙 @maureenkyle is my funniest co-worker ever. She started her career at @840WHAS in 2003 and now anchors @wkyc news in Cleveland. 📺

She’s made beautiful babies and never stops cheering on her legendary parents! ❤️

#WHAS100 🎧 Diane Williamson joined @840WHAS as a 22-year-old producer with an incredible voice. It didn't take management long to figure out that Diane needed to be on the air.

#WHAS100🎙️ Loved catching up with former talk show host @joearnoldreport reflecting on his @840WHAS and @WHAS11 broadcast highlights, singing in church, tuning in big radio signals, and his beloved @Cardinals⚾️

#WHAS100 🎙 Real estate mogul Bob Sokoler was once a TV news reporter in Georgia. A callous boss sent him searching for a better situation. That’s when WHAS improved his broadcast outlook.

#WHAS100 audio (3/23/61) 🏀 Adolph Rupp recaps the 1960-61 @KentuckyMBB season, "my dog even barked at me" after losing to Temple. Rupp has two wishes: another NCAA Championship "and a parking space on this campus."

WHAS is locked in community support. The WHAS Crusade for Children, simulcast with WHAS-TV, has raised over $200 million in its 67 years. All monies go to assist special needs children. 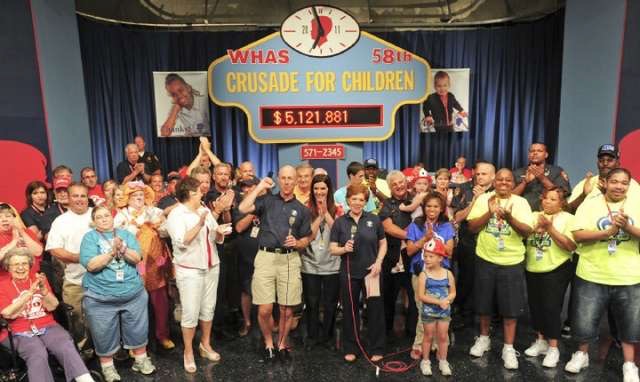 A recent interview with blind Judge David Holton illustrated problems with the local bus service for special needs people. As a result of the public spotlight, action is being taken to remedy TARC-3’s service failures for handicapped patrons.

Here’s a recent interview with former WHAS midday host John Ziegler on inconsistencies in the new book by Katie Couric.

.@Zigmanfreud, an associate of Matt Lauer, takes issue with many claims in @katiecouric's book. Journalism, huh? 🤔