Skip to content
You are here
Home > Exaggerated Fawning > With Charles Booker jumping to the big leagues, who’ll be the next mayor of Louisville?

But once he steps outside Jefferson County, people wonder if he is just howling to a smattering of lefties.

So why is he running for the U.S. Senate instead of sliding directly into the Louisville mayor’s office? 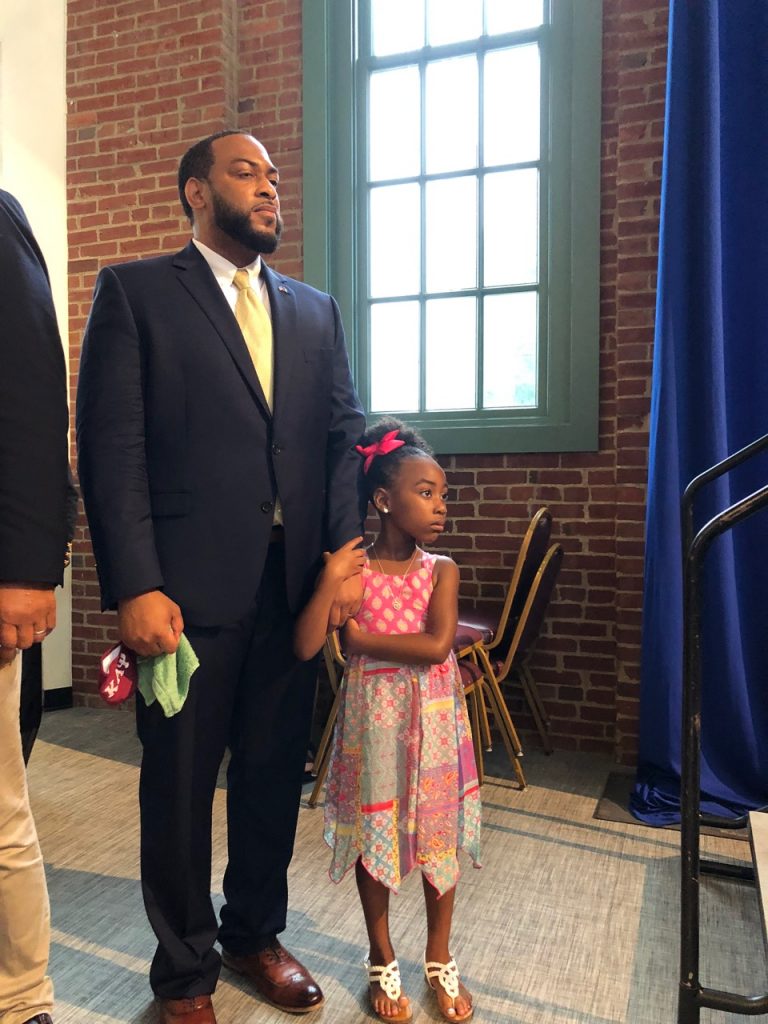 Hard to tell. Mr. Booker’s plan is to continue growing his base “from the hood to the holler” to unseat Senator Rand Paul. Pundits claim a Booker victory is a real long shot in Trump loving Kentucky, but Charles claims “we proved them wrong.”

No one has been proved wrong yet. A Booker victory would become that proof but can it actually happen?

The voters will determine whether Booker’s energetic campaign for universal healthcare, reparations, abortion rights, the green new deal, and other progressive platform priorities can overcome a tradition based Kentucky population.

This morning, we have to resolve to keep standing up for humanity. We must keep organizing to make sure everyone has quality healthcare, including abortion coverage.

Reproductive healthcare must be codified. Women’s rights must be protected. The Supreme Court must be expanded. https://t.co/69CUMVin4u 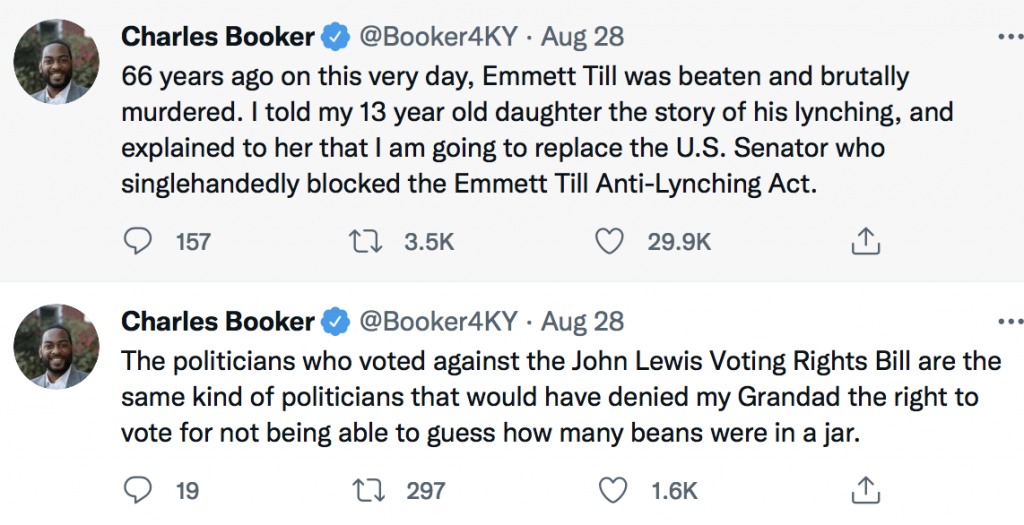 The truth is that Charles Booker would have CRUSHED all opposition in Louisville or Lexington mayoral races. But Kentucky is more than its two blue anchor cities. It’s a complicated mix of conservative, hardworking, mostly religious, very traditional, slow-to-change Kentuckians.

Democrat Andy Beshear became Kentucky governor by the thinnest of margins over a highly disliked incumbent in Matt Bevin. All other statewide races were swept by Republicans so voters specifically chose Beshear over Bevin but voted RED otherwise.

The problem for Mr. Booker is that Senator Rand Paul has not created the same level of discontent among Kentucky Republicans to force them to jump out of their voting lanes.

So who remains in Louisville’s mayoral race? This guy. 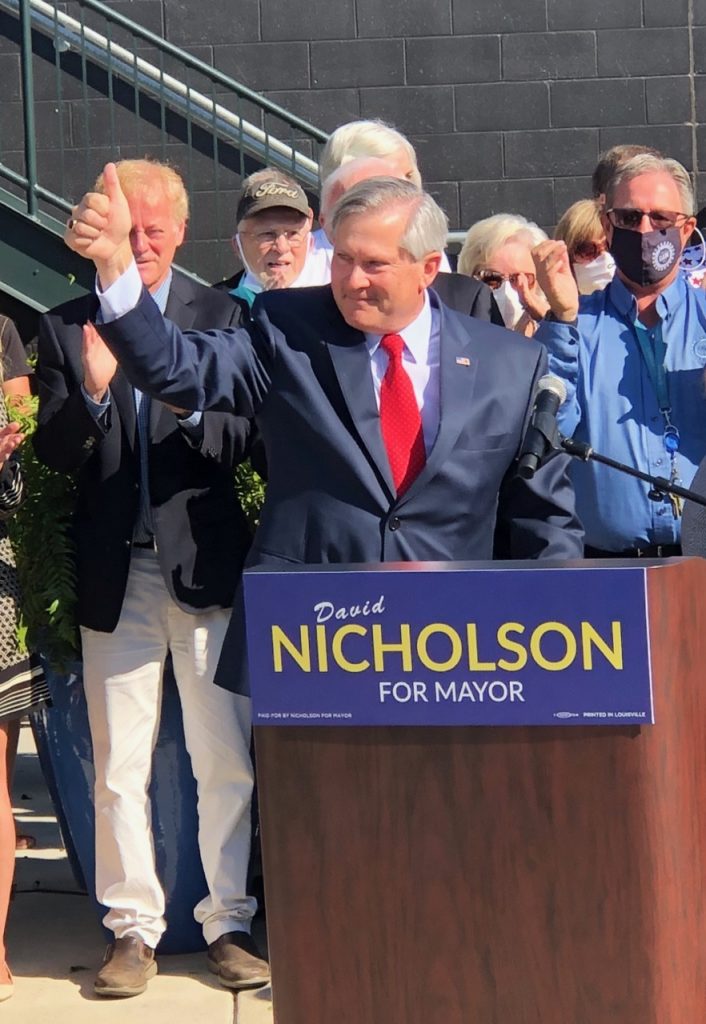 Nicholson and I spoke at length on WHAS Radio today about city safety initiatives and his financial experience working through the National Association of Counties (NACo).

The Democrat primary has shifted into a strong opportunity for Nicholson to prevail.

Metro Council President David James was the next best thing to Booker but now he’s out of the race. Reverend Tim Findlay is a political newcomer and shows some promise but is woefully underfunded. Shameka Parrish Wright is riding on her association with the family of Breonna Taylor but that heat has cooled.

Businessman Craig Greenberg is well funded but Republicans are set to use the phrase “Craig is Greg” to tie him to current Mayor Greg Fischer. That’s a smart strategy for Nicholson to adopt now. Greenberg portrayed as Greg 2.0, another hapless woke sap talking about equity instead of safety during the highest murder rates in Louisville history speaks to a vast majority of taxpayers.

Greenberg can’t afford to be perceived as weak. He’ll have to match Nicholson’s “safety first” message or get left behind as a woke joke.

A month ago, Fischer and I had an uncomfortable radio interview after the assassination of local Jefferson County Sheriff’s Deputy Brandon Shirley. When prodded, Mayor Fischer could not adequately express his support for law enforcement, opting instead to focus on immeasurable equity.

This is the type of moment that demands strong leadership in a community being crushed by historically high homicide rates.

Murders can be counted and assessed. “Equality” cannot.

All prominent officeholders tweeted condolences to the family of Deputy Shirley in the hours following his assassination. Some candidates hesitated on expressing sorrow.

Reluctance to show sympathy for a law enforcement death is a conundrum for many liberals. So much of their constituency is fueled by anti-police or DEFUND THE POLICE sentiment that progressives are fearful of being associated with any #BackTheBlue optics.

A cop’s death is not worthy of a tweet but a teenager detained for a car search is grounds for a tweet storm, protests, and a federal lawsuit? Selective compassion speaks for itself.

My heart and prayers ARE with this family and I DID go back and forth about an immediate statement because I didn’t want my words to be politicized….like this post. And if we’re going to start pulling receipts on post and condolences…lets do it with ALL of them. #RetweetThis https://t.co/4wMEplE5Eu

BROADCAST NOTE: I’ve just been informed that my next regularly scheduled interview with Mayor Fischer will not happen. Previous interview conflicts have been resolved by the mayor’s office working to move the start time or offering him for pre-recording. This time: unavailable. 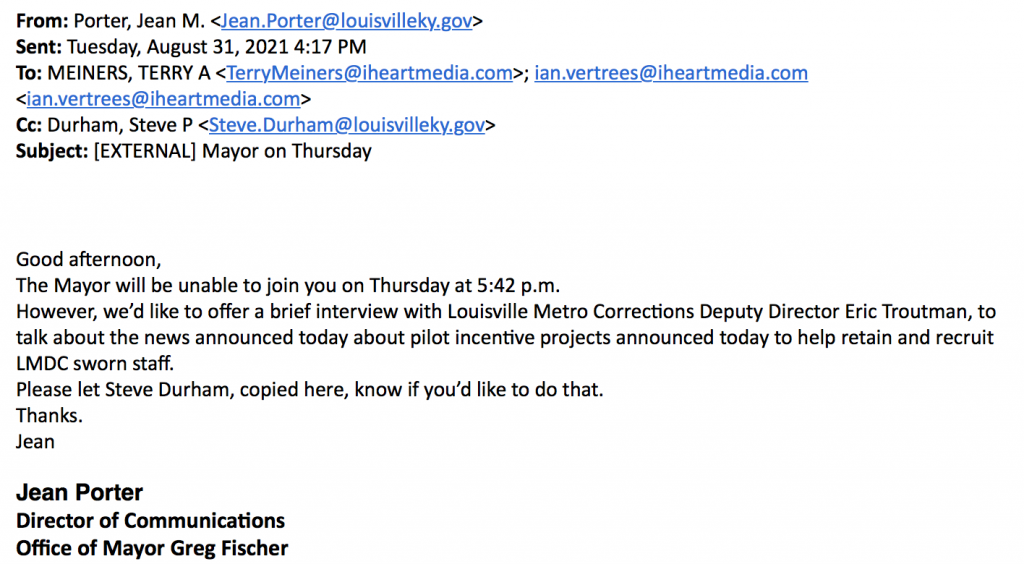 Greenberg and Fischer, “Greg to Craig,” are businessmen outsiders. How’d that work out for Greg?

Nicholson’s mayoral campaign is centered on the phrase “because Louisville’s future is dying in the streets.” Nicholson is all about law enforcement and safety first, two primary keys to gather broad support in a terrified city.

Republicans running for mayor are still a bit quiet. Dr. Mark Lynn just sold Visionworks (a chain of eyeglasses stores), purportedly to free up time for a candidacy.

His milquetoast response to a recent question about his views was not helpful.

In which potential Republican candidate for mayor, Mark Lynn, is unsure how his views differ from Craig Greenberg’s. From @kyfriedpolitics: https://t.co/EHxe7blVlr pic.twitter.com/gSzaOTEhbK

Jeffersontown Mayor Bill Dieruf is definitely running to become the Louisville mayor but he’s been relatively quiet thus far. His police chief Rick Sanders is not shy about speaking out on the strength of Jeffersontown’s leadership, solid policing, and low crime rates.

Here are related radio conversations I’ve had with candidates: