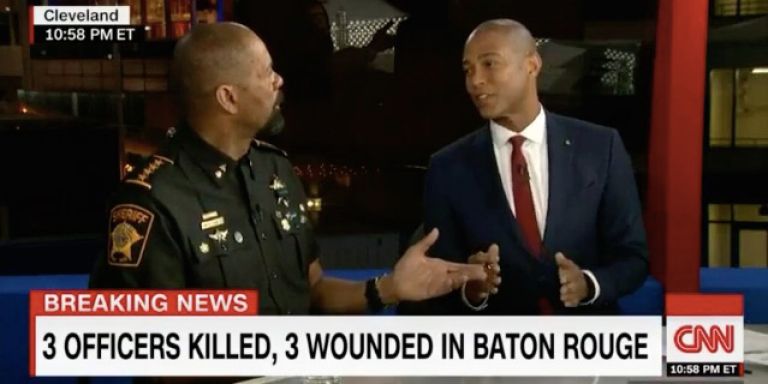 Welcome to interview school! I am fortunate enough to interview a great many community leaders, change agents, politicians, celebrities, and athletes. People frequently ask me about my casual interviewing techniques and why I don’t crush my subjects.

First, I can only be me. My personality dictates that I speak to guests on the air the exact same way that I would in a store, on the sidewalk, or in my home.

More importantly, I feel that a quality interview involves listening to the guest and not making myself a part of the narrative. The guest is the star.

Let’s look at some variance in interview segments by Don Lemon and Chris Cuomo from CNN.

This video is a compelling takedown of Black Lives Matter by Milwaukee Sheriff David Clarke. CNN’s Don Lemon is trying to constrain the conversation within his preset parameters but Sheriff Clarke takes charge.

Where Lemon falls short is trying to shut down someone who is speaking about his professional experience. Clarke is a cop. Lemon is a broadcaster. The broadcaster cannot fully understand the challenges of being a law enforcement officer. The broadcaster needs to listen to the interview subject and give them the respect of cumulative knowledge

A challenging component of doing media interviews is when a guest swerves all over the map but Sheriff Clarke casts a compelling wide net to force Don Lemon to hear him out. At one point, Lemon becomes so flustered that he tosses to a commercial break to try to regain control.

This is an excellent tutorial in interviewing media subjects, keeping the conversation on track, and learning when to be quiet and let the guest roll.

In my estimation, Don Lemon was the student and Sheriff Clarke was the teacher for this entire exchange. The sheriff was reeling from multiple killings of police officers and used his airtime to give his personal perspective of working in law enforcement.

Actor Terry Crews appeared with Don Lemon a few years later to shed light on the Black Lives Matter movement. This time the exchange is more fluid and both men sound reasonable. Lemon learned a lesson from the Clarke dustup.

Cuomo’s introduction was misleading and Ice Cube called him out on it. Cuomo backed up and gave Ice Cube latitude to explain his concepts on tightening the wealth gap.

All told, it was an enlightening exchange. This is good media work. Let the interview subject be the center of attention.

Want me to go to Farmville? Only if I can bury you there.

There is one perfect job