Fox Sports anchor Erin Andrews has been harassed by voyeurs, stalkers, and overbearing (if well intentioned) fans. She recently responded to another series of bizarre Tweets from a threatening woman.

Nuts like that woman notwithstanding, Erin Andrews can be a bit brusque when responding to innocuous tweets. LOSE THE GLASSES

Erin Andrews can occasionally overreact to criticism. Her exchange with a Philadelphia radio host seemed hypersensitive.

Last April, Erin Andrews appeared in Louisville for the “They’re Off” luncheon. The day before the event, Kentucky Derby Festival released a statement declaring that Erin Andrews WOULD NOT be available for media interviews and that media outlets WOULD NOT be allowed to record her comments.

I mentioned it on Twitter and said on the radio that it is hypocritical for a member of the media to shun others in the same profession.

She responded that she was indeed talking to the media prior to the luncheon although no official change of access was issued by Kentucky Derby Festival. The Courier-Journal did run a story with quotes from Andrews but no television stations were there to record interviews.

I Tweeted to Erin Andrews that media could only go on the official word of KDF that access was denied, adding “you know that…you’re a reporter.” 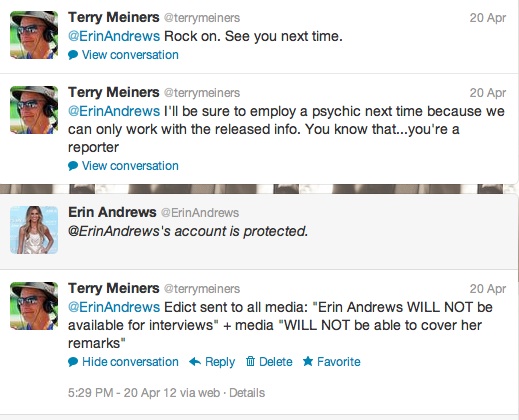