I always enjoy a face-to-face chat with political leaders and other newsmakers. There is a comfort level in sitting across the table from an interview subject. Watching their body language, eye contact, and hand gestures adds extra dimensions that a telephone chat cannot provide. LISTEN TO TERRY MEINERS AND MITCH McCONNELL Mitch McConnell is the longest serving U.S. Senate leader and longest serving U.S. senator in Kentucky history. We've done a ton of phone interviews during his 38 years in office. Studio visits produce better content. Arriving 15 minutes early at WHAS' iHeart studios, Senator McConnell and I were able to talk about a few things off air before we opened the mics. He laughed when I asked if "Cocaine Mitch" was planning

It's still a year away but WHAS Radio will turn 100 on July 18, 2022. WHAS was Kentucky's first licensed radio station. What a wild trip it's been! 🎧 current WHAS audio:  morning show, mid-morning, afternoons  🎧  historical audio Here's what WHAS-TV dug up in its video vault to note the radio station's 95th birthday in 2017. The Courier-Journal and Louisville Times Company obtained the broadcast license in 1922 and built a studio near the newspaper facility. This fall, current WHAS Radio owner iHeart Media will move the studio operations from Bishop Lane in the Newburg area back to downtown. WHAS has enjoyed a fantastic array of broadcast talent over the past century. The station has won prestigious awards for news coverage, emergency operations

For over two years, America's news anchors have been breathlessly declaring that Donald Trump's presidency "is near the end" with daily BOMBSHELL reports of "the walls closing in" toward impeachment. Louisville actor Jennifer Lawrence and her politically active friends claim they're offering a nonpartisan solution to America's hysteria-driven news cycle. Jennifer Lawrence and Represent.us have a strategy to change our political system. Will it fly? What Jennifer is not acknowledging is that too many megaphones with differing opinions all monetize misery. MSNBC, CNN, The New York Times, et al. make a living by siding with liberals on virtually every issue, always demonizing the conservatives. Fox News, Rush Limbaugh, Breitbart, et al. do the same thing in reverse. THere's money in them

‪Former U.S. Secret Service agent Greg Gitschier tells his incredible story in "Sneakin Deacon." He details wild career adventures, global security insights, danger, compassion, personal protection of luminaries, plus his transition to becoming a deacon in the Archdiocese of Louisville. The opening chapter takes you along with a 21-year-old rookie cop into a harrowing situation where Gitschier has to quickly decide whether to shoot a rapist who burst into a woman's apartment. Sneaking' Deacon takes you around the world into turbulent hotspots and gentle encounters that show the delicate work of law enforcement and protection. This book grows even more heartfelt appreciation for the men and women who quietly protect America and its leaders. Order it 🌎 via butlerbooks.com‬ or pick

Dear political activist, thanks for pointing to a Breitbart piece that ultimately shows how reasonable and open-minded Jennifer Lawrence is when met with an opposing opinion. I get it. You don't like anyone slamming President Trump. The crux of the piece actually shows the power of tolerance for differing opinions. Sounds like a reasonable overview of family, love, and diversity of opinions. Thanks for sharing, Sean. Here's a piece about Jennifer donating millions of dollars to assist sick children. How about you, bro? Jennifer Lawrence kept up her Christmas tradition of visiting the children's hospital in her hometown of Louisville, Kentucky. https://t.co/hfTq3EHo5W pic.twitter.com/fc3YsqSu9v— ABC News (@ABC) December 26, 2017 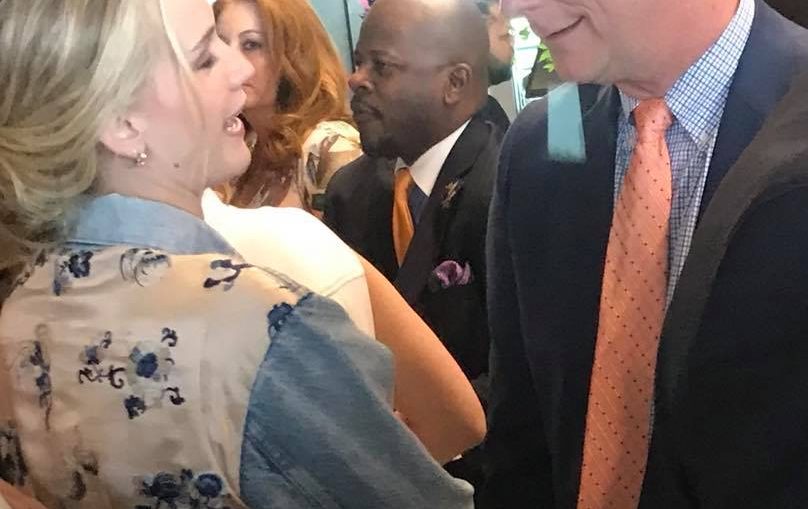 Jennifer Lawrence did one of her first radio interviews with me in 2009 for the release of the film The Burning Plain. She returned the next year for a chat about Winter's Bone, which would earn Jen her first Academy Award nomination. The first time we met, I walked into the WHAS radio studio and Jennifer said "Dude, I'm starstruck. I've seen you on TV my whole life!" She refers to me as her "first celebrity" friend. Last week on WDJX radio, she popped into an interview with singers Linkin Bridge as they prepared to go on Jimmy Kimmel Live, hosted by Jennifer Lawrence. Thanks for the shoutout, Jen. It gave me a hearty laugh. You rock!

In the wake of the Harvey Weinstein sexual abuse scandal, many Hollywood stars are revealing their own stories of enduring abuse. Louisville's Jennifer Lawrence told an awards show crowd about an incident where a female producer had actresses lined up nearly nude in order to fat-shame them. Jennifer's mom Karen was listening to our Hollywood reporter talk about it and called in to correct misconceptions and sloppy reporting about the story. Back in 2012, Jennifer was shining light on Hollywood's weight-shaming attitudes. Here is part of Jennifer's story from this week's awards show.

Haha. Bwahahahahahaha. When Jennifer Lawrence talks... ...some people lose their minds trying to read too much into it. handle with fear. don’t miss #mothermovie in theatres friday and your gettickets now: https://t.co/8WCqd9F3iy pic.twitter.com/QeuMzumyU7— mother! (@MotherMovie) September 11, 2017 Even SNOPES (a known hoax site) had to weigh in on the overreaction. Jennifer Lawrence responds: "My remarks were taken grossly out of context. Obviously I never claimed that President Trump was responsible for these tragic hurricanes. That is a silly and preposterous headline." Promoting her new film MOTHER! on Jimmy Fallon's show, Jen also talked about her trip to Louisville where ax throwing became a memorable moment (approx 6 minutes into video). I hope this is the theme song for the crazy horror film MOTHER! And since

U.S. Senate Majority Leader Mitch McConnell confirms that he is prepared to use the so-called nuclear option, changing traditional rules of the Senate to allow for a simple majority vote to confirm U.S. Supreme Court nominee Judge Neil Gorsuch. In a WHAS radio interview with me, McConnell noted that the longstanding tradition of requiring a supermajority of 60 aye votes was overrun in 2013 by then-majority leader Sen. Harry Reid. Democrats point out that Reid's use of the nuclear option was to advance lower court appointments, not Supreme Court nominees. Here is the entire WHAS interview, which also covers whether superpowers should intervene following Syrian chemical attacks, if GOP in-fighting will wither 2018 election hopes, health care upgrades, tax reform, and