Do some people of color — Jay Z — use them for personal financial or political gain?

Or are people using select police actions to create unchecked mayhem? Will there be backlash or progress?

Meanwhile, African Americans keep killing each other in staggering numbers (when compared to other races in percentage of overall population).

Noted African American scholar Thomas Sowell: “You cannot exempt people, of any color, from the requirements of civilization — including work, behavioral standards and personal responsibility — without ruinous consequences to them and to society at large.”

A young man tells his Baltimore story. The conversation is on.

Newton’s Third Law: For every action, there is a separate but equal reaction — Baltimore’s murder rate has skyrocketed because activists and African American leadership impede the city’s police activity.

After the uprising over Freddie Gray, cops backed away from hazy new rules and people killed each other at the highest rate in 43 years.

A cultural tragedy for America at large is the flippant use of the race card. On David Letterman’s final show, comedian Chris Rock added this race-based red herring: 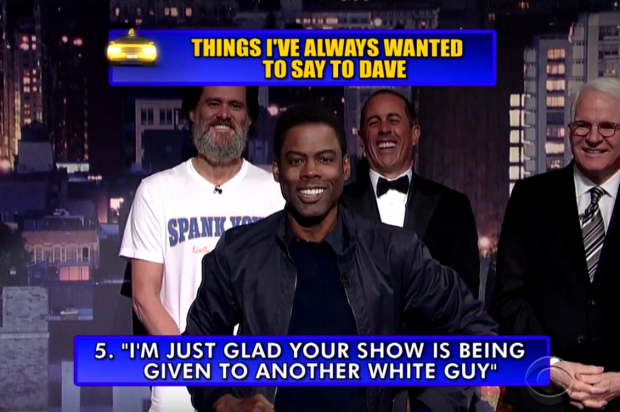 The joke is funny but ignores the fact that African American show hosts are plentiful and, like in any business, sometimes successful. Arsenio Hall, Keenan Ivory Wayans, Magic Johnson, Montell Williams, Tavis Smiley, Mo’Nique, D.L. Hughley, and even Chris Rock have tried and failed at late night TV. They hosted shows that either burned out or failed to make enough money to sustain their business models.

Chris Rock left Letterman’s studio, climbed into his chauffeured vehicle and disappeared back into his 1% lifestyle after furthering the notion that people of his race are denied opportunity.

But the joke got a laugh, a validation of the power of show biz fiction.