What in the Sam Hill is a-going on around here? UK football is 7-1 and crushing fools like a runaway cable spool rolling through a campsite.

The Kentucky Wildcats football team has impressive wins over Florida, Mississippi State, South Carolina, Missouri, and Vandy with a lone loss to Texas A&M (in overtime on the road).

How in the world does Ohio State, pummeled a week ago by Purdue, jump three spots forward during a BYE week? Kentucky sits in the old Buckeyes #11 slot. Ohio State got promoted to #8 while they slept.

The Cats’ football future looks good with probable wins over Tennessee, Louisville, and Middle Tennessee with a likely loss to #6 Georgia. But don’t count out these Wildcats. They’ve found amazing ways to win all season and the Georgia game is in Lexington.

The thing to REMBMBER IN NOVEMBER is the University of Kentucky’s stunning football success at a basketball crazed school. Even Calipari knows he is, for now, a second tier attraction. 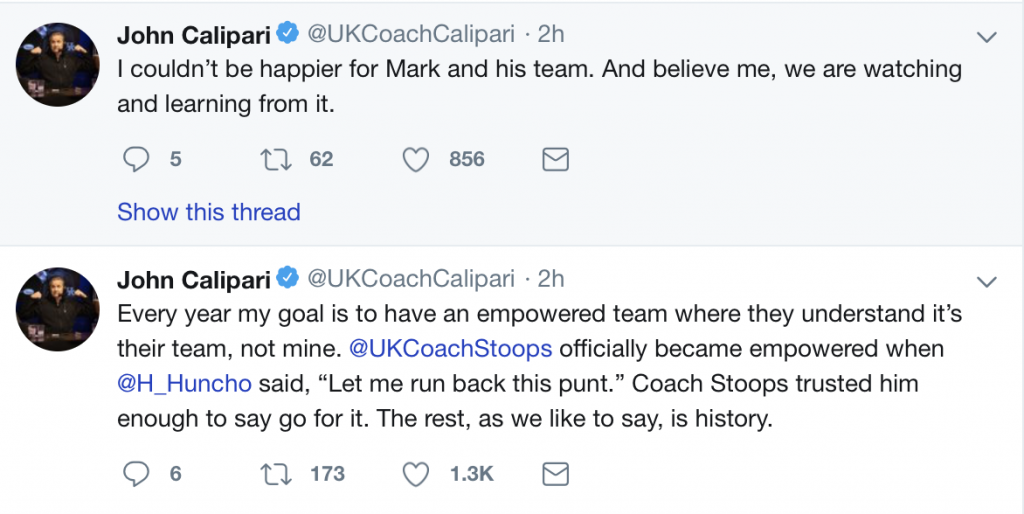 Forget the Revenge of the Dems. The only Blue Wave that will materialize this fall is connected to the Kentucky’s impressive football squad. They’re literally going through the roof.

My brother Greg just called me from Missouri. He was screaming about something but I couldn’t understand a word of it. 😂 pic.twitter.com/CBpOyWm6Jo