This is not a post about race. It is a post about a community’s inherent mission, the protection of its law-abiding citizens from predators.

The Great Wall of China is not a decoration. That wall, forts, castles, and foxholes were created for protection from predators. People who live in a community do so with the understanding that they will protect each other – or pay taxes to afford efficient protection – from those who would burst the order of the community.

When a person or persons within the community breach that pact, they are sent to another sturdy construction called a prison so that they cannot continue preying upon their community.

GHOST TOWN ON THE RIVER

In the 1970s, Louisville’s growth was stunted by the derisive term Strike City, a label earned from repeated union strikes at various companies. The River City Mall killed 4th Street businesses when the pedestrian mall led to more assaults. Thugs had omnidirectional escape routes without fear of surveillance from vehicular traffic.

Louisville will be known as Thug City unless it deals with today’s recurring issues created by sociopathic roving thugs.

Apologists immediately claim Saturday’s mayhem is an isolated incident. That reaction is based on ignorance of local history, or is an intentional lie to mask a colossal local problem.

There are no roving bands of thugs in the South End, Southern Indiana, Okolona, J-Town, Anchorage, or at Norton Commons, an artificially urbanized colony on the outskirts of town.

Why would anyone invest in the just announced $261 million Omni Hotel complex (plus apartments and grocery store) on the old Louisville Water Company block downtown? Who wants to buy a condo in NuLu or SoBro or along the waterfront if they must fear getting a broken jaw walking to a restaurant?

This is a simmering economic crisis for Louisville that must be solved or the fallout will mirror the 1970s debacle downtown. Today’s Fourth Street business corridor has improved beyond wig shops and costume jewelry stores but not by much. If downtown security remains dicey, there will be five more Norton Commons colonies built in outlying areas while downtown becomes the stage for I Am Legend 2.

NOTHING REPLACES A MAN IN A BOY’S LIFE

We’ve seen the dog and pony show of the local ministers saying that “these kids” need opportunities.

The opportunities are there. The parental leadership is not.

Left to his own devices, a boy will play violent video games, roam the streets, and inflict his will upon the unsuspecting pedestrian because the people who gave birth to him or foster him are insufficient leaders.

To some of these young men, the Grand Theft Auto video game is transferable to real life.

If there’s not a man present in a home, there needs to be a mature male influencer for every boy. Every boy needs structure. Every boy needs a male authority to show him how to be a proper man who respects the community.

Single moms work hard but they are not the only authoritative voice every boy needs in his maturation process. He needs a male to lead him, teach him, and empathize with issues only men understand.

You want opportunities? You have a multitude of resources like Big Brothers, Boy Scouts, YMCA, and countless others who stand ready to provide the strong male voice that illustrates to a fatherless boy how to be a man.

If anyone is unable to see that opportunities to study, work hard, submit to structure, and be a part of the community as life’s self-earned assets, then a strong male voice will teach the lesson until it is learned.

Otherwise that boy will be on the streets creating mayhem as a means of earning depraved peer acceptance that leads to prison or death.

In the recent case, WHAS-11 reports that one group being questioned by police is reportedly called YNO for “Young And Offensive,” a name not normally associated with good kids with healthy intentions.

Between 7:30 and 9:30 p.m. on Saturday, March 22, about 200 youths wreaked havoc around the Big Four Bridge and Waterfront Park before breaking into smaller packs that stormed a store, beat pedestrians and car occupants, and destroyed property over a wide area in downtown Louisville.

Roving thugs inflicting mayhem on fellow citizens is not new In Louisville, even though Mayor Greg Fischer repeatedly tells media outlets that we “have not seen this type of activity in decades.”

Former law enforcement officers posting online claim that Louisville police are told by superiors to assign crime reports from Waterfront Park to other downtown addresses to protect the image of the park.

Adam Bader, a manager of the store stormed by thugs last Saturday night, told WDRB News that these rampaging attacks occur regularly. “It’s not isolated. It’s been going on for years.”

Bader said multiple police units have been called over the years to quell throngs of teenagers storming his store to steal and create mayhem.

The manager on duty at Bader’s Food Mart, Alvin Matthews, tried to close the doors Saturday before youths forced their way inside to steal and/or assault bystanders. Matthews also said these incidents happen regularly and that he had to call the police just two weeks earlier for the same issue.

A few years ago, a mentally challenged man was beaten by members of a roving gang near Slugger Field, adjacent to Waterfront Park. He was hospitalized with a skull fracture. The gang terrorized multiple people around the ballpark on that summer night in 2011.

VICTIMS ARE NOW TALKING TO THE MEDIA

Ask Jim Henry, the 61-year-old man beaten last Saturday at the Big Four Bridge, if his wounds are “hype.” Ask Viola Loeffler, who was punched in the face while sitting in her car with her five children. Ask Ron Carter, who was pummeled by a mob of teens that blocked the path of the car that he, Loeffler, and the children occupied at First and Liberty streets. Ask the other people who were beaten for doing nothing more than strolling in their city during the early Saturday evening.

They all wound up in the hospital just for minding their own business on the streets of downtown Louisville. Their pain, shock, embarrassment, humiliation, and medical bills aren’t hype.

One woman parked her car on Fifth Street alongside The Courier-Journal and walked to Fourth Street Live for some Saturday fun. Only later did she see security video of young punks trashing her vehicle. Her repair estimate is for $4,500.

Yes, it’s all just media hype. Move along, nothing to worry about.

If this insanity is not reported then the 1% of societal perpetrators continue beating the 99% into submission. That’s not how a society rolls.

In an email from Louisville Downtown Partnership regarding roving packs of thugs: “Good people can find it difficult to resist when they are in the midst of a ‘pack mentality.'”

Any person who sees a peer beat an old man and then (the “follower” teen) walks past his crumpled body without rendering aid is not a “good person.” He is a heartless punk like everyone else in a pack that roams to beat people, steal, and destroy property. His inaction is inexcusable at best, if not depraved indifference.

THE MAYOR DOES NOT WANT YOUR OPINION

WHAS-11 quotes Louisville Mayor Greg Fischer: “It’s easy for people to be critical and instant experts when something like this happens. What we are interested in are people who are ready for the solution. It’s easy to be a critic from the couch if you are one of those people you can keep your thoughts to yourself because we have too much work to do.”

Note that the mayor said “When something like this happens” although earlier he claimed that it has been decades since Louisville has seen similar flash mob violence.

All we’ve heard from city leaders is a hazy promise for more patrols, additional surveillance cameras (just like Hunger Games!), and more ministers reminding these “good kids” that it’s not cool to punch a woman while she’s sitting in her car obeying a stop light.

HERE’S THE SOLUTION, MAYOR: THE RULES ARE MADE BY THE 99%

What sane person would open a business in downtown Louisville if the community cannot offer basic protection from roving packs of flash mobs intending to steal, destroy property, or assault customers and/or clerks?

Arrest and incarcerate anyone inflicting harm on others. It is the very mission of a community — protection of the law-abiding people from insane violence foisted upon them by predators of any age.

Don’t tell us they’re “good people” caught up in a momentary pack mentality.

These punks know that assaulting and stealing are crimes. That’s why they look around before committing crimes; they know they are violating the structure that 99% of the people follow.

Crush the criminality just like New York mayors did it years ago to save that city. Times Square was a war zone in the 70s and now families flock to it because it is a well-policed safe place.

Waterfront Park – the KFC Yum Center – Fourth Street and the entire TIF zone is Louisville’s Times Square. Protect the people who pay for these community enhancements.

Apathy, blurring police reports, or crying racism to avoid enforcing the primary community mission of protection is dereliction of duty by city leaders.

A friend offers this sage observation about Louisville’s simmering gang issues: “I’ve never ignored a problem and had it go away.”

UPDATE: A few days after this post appeared, Mayor Greg Fischer and I chatted on the radio about strategies and inconsistencies in current leadership methodology. HERE’S THAT CONVERSATION

A week after the rampage, the Courier-Journal printed this piece on successful strategies applied in other cities with roving gang violence. 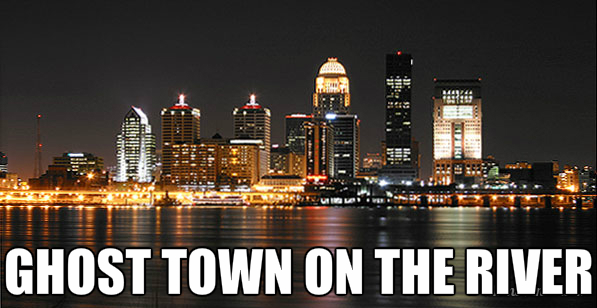 All I want for Christmas is a pitch pipe

Just sit right back and you’ll hear a tale, a tale of a fateful trip

Riddle Me This: Am I always wrong?