President Donald Trump invited Daniel Cameron to the White House last week for a chat and an endorsement in his race to become Kentucky’s first African American attorney general.

Cameron and I talked on the radio today about 30 minutes after Trump tweeted his endorsement news that was embargoed until today’s tweet was posted.

….He is tough on Crime, Strong on Borders, and will fight for our Second Amendment. Daniel will never let you down. He has my Full and Complete Endorsement!

Cameron tells the story of the meeting, the authorship of the tweets, other White House protocol, leaving by Uber, and his vision for the attorney general job.

Democrat Greg Stumbo is opposing Cameron and both are calling each other liars in various campaign ads. Stumbo’s 19-year-old daughter launched a Twitter assault at Cameron and was quickly blasted back by former Kentucky GOP spokesman Tres Watson.

In spite of his daughter’s adult status, Greg Stumbo was not pleased with Watson’s return volley. 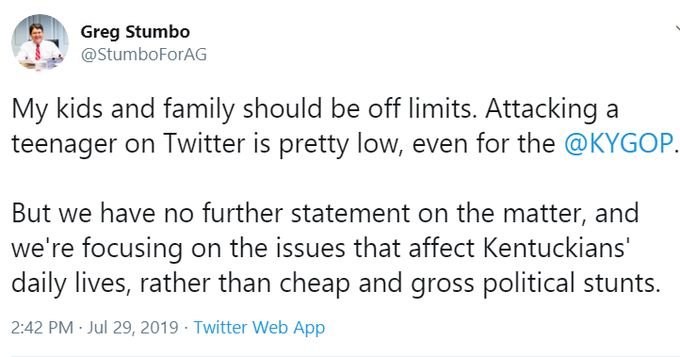 In the radio interview, Cameron and I discussed the upheaval over Watson’s tweet and other issues related to the Trump endorsement. Here’s the WHAS Radio audio:

Greg Stumbo is scheduled to be in the WHAS studio with me on Wednesday, August 7th at 5 PM for a full interview.