The universities of Louisville and Kentucky renew their annual football rivalry on September 2nd at Papa John’s Cardinal Stadium.  These shots were from the early morning TV pep rally for WHAS-11’s Good Morning Kentuckiana show. 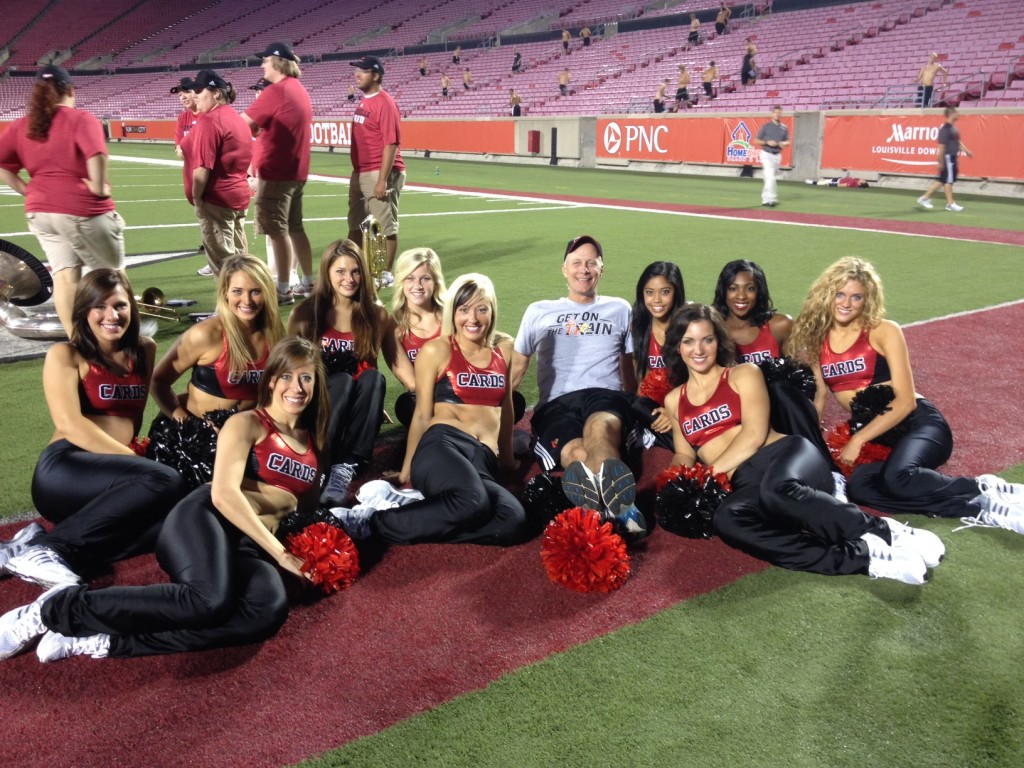 While others ran the stadium steps, my workday started a little more pleasantly. The UofL Ladybirds performed on GMK several times. Then during the down time, they read texts from guys teasing them about how they looked on TV. I gave each girl a taser and told her to defend her honor with any smack talking college boys.

A new display wrapped around the Crunch Zone’s east end features all 16 logos of UofL’s bowl appearances over the years. 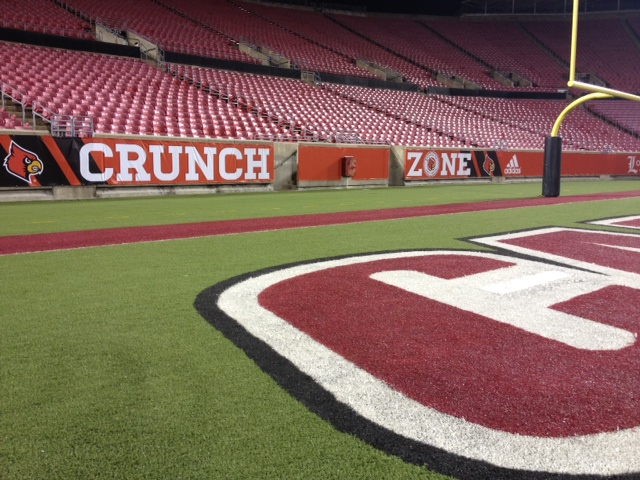 The vaunted Crunch Zone area is the loudest part of the stadium. New wrap around the perimeter gives a sleek look for TV cameras.

Yahoo! News’ Washington bureau chief David Chalian was fired yesterday after a hot-mic blunder during an online broadcast from the RNC in Tampa. Referring to the simultaneous occurence of the GOP convention and the hurricane floods in New Orleans, Chilian made an off-the-cuff remark, picked up by an open mic, saying that Mitt Romney and his wife Ann were “not concerned at all” and “happy to have a party with black people drowning.” Audio of the incident quickly made its way online, posted by media watchdog NewsBusters. Yahoo! released the statement: “David Chalian’s statement was inappropriate and does not represent the views of Yahoo!. He has been terminated effective immediately. We have already reached out to the Romney campaign, and we apologize to Mitt Romney, his staff, their supporters and anyone who was offended.” Chalian issued the following apology: “I am profoundly sorry for making an inappropriate and thoughtless joke. I was commenting on the challenge of staging a convention during a hurricane and about campaign optics. I have apologized to the Romney campaign, and I want to take this opportunity to publicly apologize to Gov. and Mrs. Romney. I also regret causing any distraction from the exceptional coverage of the Republican convention by Yahoo! News and ABC News.”

______________________
A Newsday report indicates that Chalian, who is white, suggested to his upcoming guest to “feel free to say” the offensive words about the Romneys.
Putting words in a guest’s mouth is absolutely despicable, unprofessional, dishonest media behavior. That may explain the swift reactions by Yahoo! and ABC News, for whom Chalian was chief political director before focusing on the web company’s political coverage.
A common thought process is that a host can direct a guest with a “last words in” prior to air will elicit “first words out” from a guest, also known as “parroting.”  In an innocent application of this broadcast technique, a host can assist someone who is apprehensive about being on the air out of nervousness.  In that scenario, the host and guest may practice what they’ll say.
In no way should a host or interviewer ever create a storyline for a guest to “parrot” once they get on the air.
To illustrate a difference in reporting, here are accounts of the Chalian story where no mention is made of the host attempting to steer his guest.  POLITICO  Huffington Post
This Los Angeles Times writer can’t stop gushing about what a great guy Chalian is, citing other media members who see no problem with parrot-prepping a guest. 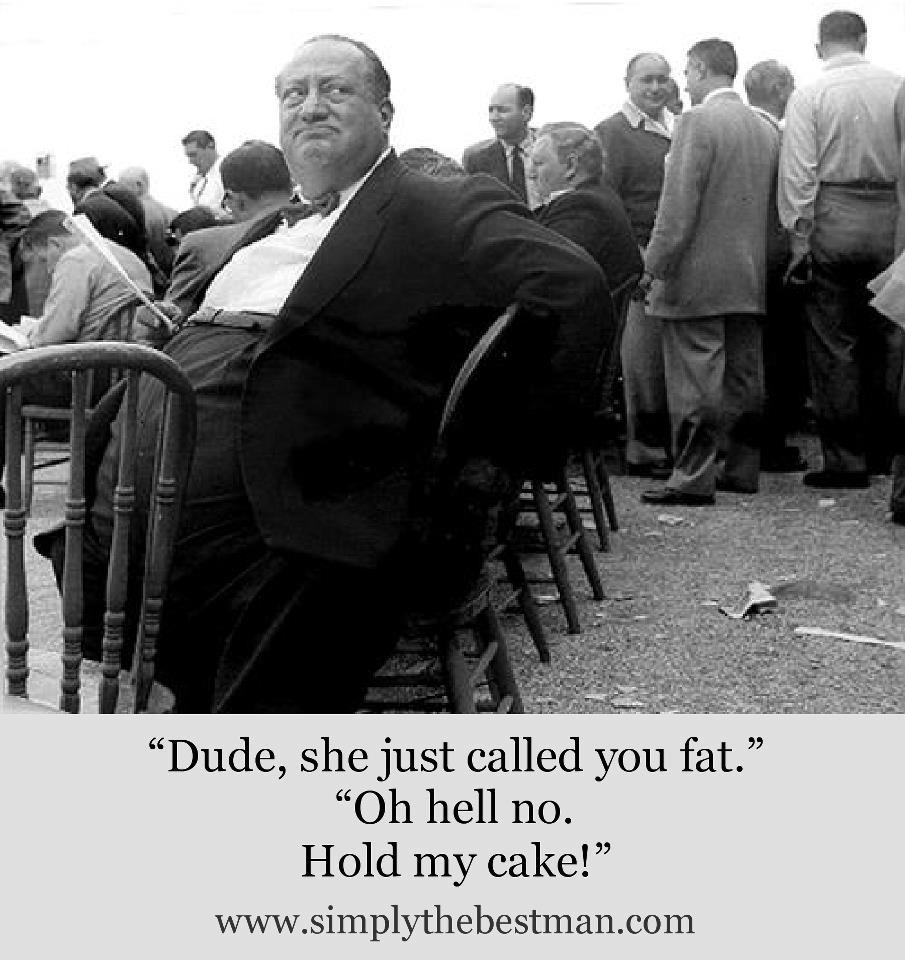 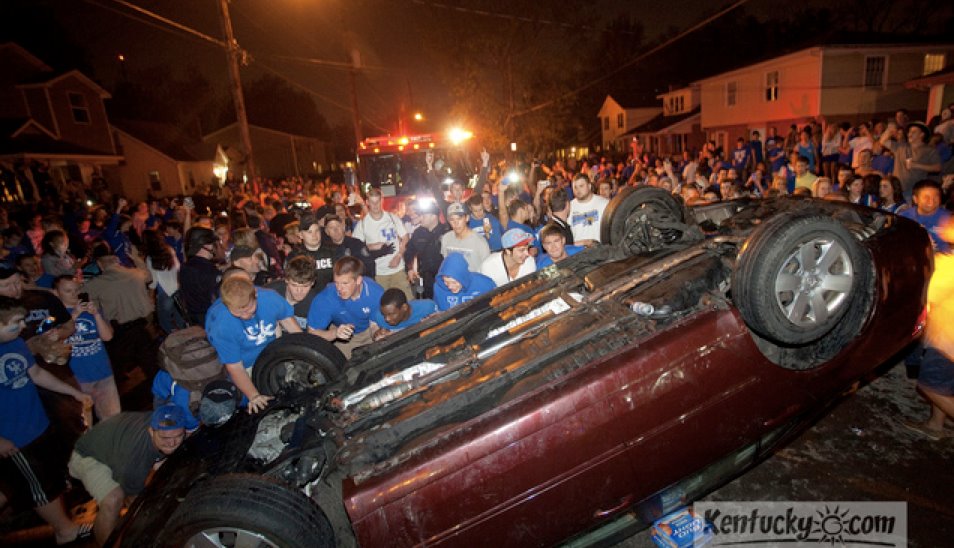 A projection of Sunday night frivolity in Lexington after UK loses to UofL in football.

You young people will find the Rom Bomb video blog, like, trippin and freaky, yo.  Word. 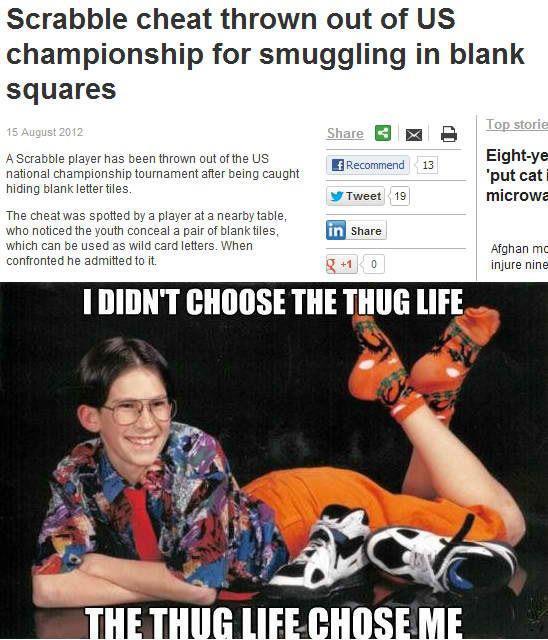 Pay up, turds. The rest of us are shouldering your responsibilities.

On Friday’s radio show, I cited several polls and wondered aloud if the over/under on Mitt Romney would be whether he would get more votes than John McCain received in 2008.

LOL! Well, you don’t hide who YOU want to be the next President, do you? The disdain and contempt in your voice as you just spoke about Mitt Romney pretty much says it all. I do have a piece of advice for you: Before you spout off on politics, why don’t you actually READ the news, then get on the air? That way, you can be like the little trained Obama drones that manage to at least leave the sneer out of your tone when you speak of what you libs call ‘Birthers’, whom you then link to ‘crazies’, which of course leads you all to “Tea Baggers’. I personally don’t care where the guy was born anymore, I just want him gone. If you weren’t such a brain-washed lib, you would too. If not for yourself, at least for your kids or nieces and nephews. I’m not trying to convince you, that’s for sure. Truth is the ENEMY of liberalism, and I know I would be wasting my time. What I will say is that you ought to stick to news about Britney Spears and American Idol. Those subjects are your speed. Meaningless and empty, AND it has the added bonus of not having to be actually INFORMED about anything!
Your ignorance about, and your blind obedience to, something you don’t understand, (or care to) is both appalling and alarming.
In other words, you’re just another UNINFORMED lib!

See ya’ in November! LMAO! Polls….which ones are YOU reading? The same ones Debbie Wasserman-Shultz does? Dang, sorry, that was a dumb question. Of course they’re the same ones.

You don’t know jack about me.

Thank you for your response.

As I pointed out in my e-mail the tone in your voice said pretty much all there is to say about your political outlook. That was what the e-mail was about, after all. Your POLITICAL outlook. I addressed the fact that you are FOR President Obama. When it comes to this particular issue, (the Presidential campaign) I somehow feel sure that am sure I am not the first one to e-mail you about the your leftist/apathetic leanings.
Of course, you never addressed all that. You did what libs do. You wrote a one line sentence basically echoing the same tone you use to describe anything a Republican does.

I would hazard to guess that as long as you have been on the radio, Mandy Connell (whom I ALSO think is somewhat uninformed but at least the light is beginning to come on) probably has more listeners than you even in the short time she has been here. Would I be right?

One thing you are correct about: I don’t know jack about you OTHER than your political bent, and don’t care to. Anyone as old as you that actually says ‘ That’s SO ’08′ in reference to something that half the people in the country believe is not someone I would WANT to know. You dismissed an entire section of Americans with a sneer. I no longer listen to Rush Limbaugh for the same reason. It’s a one-way street for him also.

That’s enough for me.

My advice to you: Read some REAL news. It doesn’t have to be the birther stuff you hate so much, just some REAL news about all the OTHER things that are going on in Washington and around the country. Again, I know I am wasting my time, but it’s my duty to try, since you at least had the decency to respond to my e-mail.

Thank you again, and have a good day!

I am Mandy Connell. The station saves on salaries by making all of us change our voices to pretend to be different people. Tony Cruise is also Mark Levin and Ron & Mel. Lachlan McLean also acts as the overnight UFO guy and all of the Sunday morning preachers.

Recessions are rough on all of us.

Are you really you, or is someone else pretending to be this condescending, nameless know-it-all?