Skip to content
You are here
Home > Optics > After another police officer is assassinated, Mayor Fischer proclaims Louisville safe 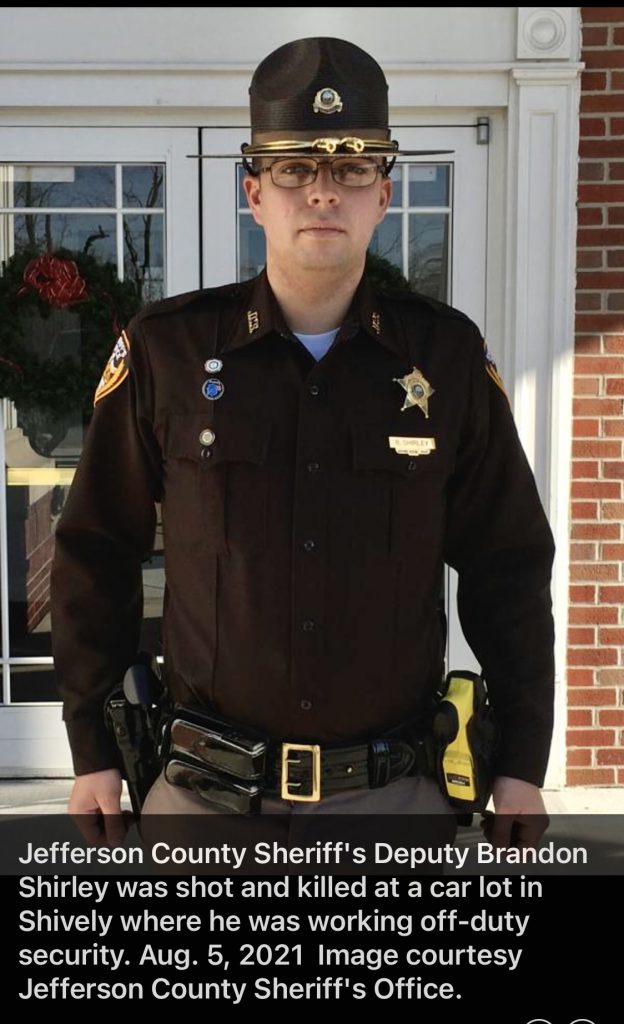 26-year-old Brandon Shirley, a Jefferson County Sheriff’s Deputy, was shot to death while working security at a Shively car lot. Deputy Shirley’s assailant has not been apprehended although Louisville Metro Police Chief Erika Shields says they have identified potential suspects.

Chief Shields said the victim was targeted. “If someone is really determined to kill you, they will kill you. And that was the case here,” she said during the news briefing.

“We will make an arrest,” Shields said.

Louisville Mayor Greg Fischer joined me on 840WHAS radio today to discuss the decorated officer’s death and answer questions about protection of law enforcement and the overall safety of the city.

The interview became a bit contentious as I pressed the mayor on the perception that he does not offer strong support to his police force. “That is a ridiculous assertion,” the mayor fired back.

Mayor Fisher insisted Louisville is safe in a contentious radio interview — prompting Jeffersontown PD’s chief to dismiss his claims, saying LMPD officers are leaving for other departments in droves.

Earlier in the show, I spoke with Jeffersontown Police Chief Rick Sanders who was not shy about challenging the Louisville mayor’s contention that he supports his cops.

From at least 7 total shootings, Louisville’s 116th and 117th homicides of 2021 were recorded over the two days following Mayor Fischer’s contention that the city is safe.

Doesn’t sound like a safe #Louisville to me @louisvillemayor pic.twitter.com/rYff3d4ySi

After a community crisis, media organizations report on reactions from elected officials. Here are condolence compilations from the Courier Journal newspaper and WHAS11 television.

In the final hour of my WHAS Radio show, I wondered why certain political candidates did not tweet condolences to the family of the slain officer.

Two mayoral candidates, Tim Findley and Shameka Parrish-Wright, did not acknowledge the death of Deputy Shirley although they were both active on Twitter. Senate candidate Charles Booker mourned the loss of union leader Richard Trumka but did not tweet about the dead deputy. Congressional candidate Attica Scott also ignored the death of the policeman but found time to retweet actor LeVar Burton’s musings about hosting Jeopardy.

After I tweeted about the candidates ignoring the police tragedy, two of them (Findley and Booker) posted late night responses.

My heart and prayers ARE with this family and I DID go back and forth about an immediate statement because I didn’t want my words to be politicized….like this post. And if we’re going to start pulling receipts on post and condolences…lets do it with ALL of them. #RetweetThis https://t.co/4wMEplE5Eu

Over the years, I have worked with many women and men in uniform who strive to realize true community safety. Today, one of those servants was slain. I join our city and commonwealth in mourning the loss of Deputy Brandon Shirley, and pray for his family in this difficult time.🙏🏾

Apples and oranges, of course. I spotlighted the messaging (or lack thereof) by various politicians to gauge their empathy towards police officers who’d been murdered or injured by predators.

Did these same politicians and community leaders who’ve marched and tweeted in support of #RacialEquity, #DefundThePolice, and #BlackLivesMatter also publish sympathetic messages for the officers who’ve been shot? Or are they playing to a constituency that wants to believe ACAB (all cops are bastards)?

Sadiqa Reynolds works hard generating job training, financial seeding, and other boosts for Black citizens in her role as CEO of Louisville Urban League. She also crafted the Path Forward for Louisville, including an initial $50 million demand for city resources to help “re-imagine” policing after Breonna Taylor was killed by LMPD.

Nonetheless, Sadiqa has a heart for every member of society, including police officers. Instead of silently ignoring the assassination of a cop, Sadiqa understands that #EverySoulMatters.

Saw @CouncilmanJames yesterday. I could tell he wasn’t himself. Later learned why. Violence is the enemy. This is tragic. I hope this case and every homicide case in our city is solved. God bless the families of this victim and every victim.
Invest in #rootcause change. https://t.co/yme9dsNZ07

I feel it’s fair to question any person running for public office if they mourn all citizens or just some lives matter.

FYI. You don’t lose a single vote sharing condolences to the family of someone who died—whether it’s a 23-year-old Black women who died supsicously in a jail or a 26-year-old off-duty sheriff’s deputy gunned down in a parking lot.

All this shows is how even those seeking to represent all of us live in the same silos we do.

Folks in #loumedia speak to people across our community and bring up why officials and candidates do or don’t say certain things.

This is fair game. pic.twitter.com/VBQNd0dnv0

In Chicago, two police officers were shot two days after the Louisville killing of Deputy Brandon Shirley. Chicago’s Mayor Lori Lightfoot, a friend of the #DefundThePolice movement, struck a different tone regarding the death of a young mother who happened to be a Chicago cop making a traffic stop.

Today is an official day of mourning for the city.

We lost a young officer. I offer my condolences to her mother, brother, family and friends. Please keep this officer, the officer in the hospital and CPD in your prayers.

As for Mayor Fischer’s radio interview claim that LMPD officers did not turn their backs on him, or that “it was misreported,” watch this SnapChat video.

Or maybe this one that someone actually tweeted in real time. Deny and Lie is @louisvillemayor way to run Louisville. @terrymeiners pic.twitter.com/Tu8DvrVWNW