Skip to content
You are here
Home > Uncategorized > PILOTS AND DECISIONS: why not turn back? why not ask for instrument guidance safely to a nearby airport? Here’s the radar track of Kobe Bryant’s helicopter.

The first question to ask about the helicopter flight that killed Kobe Bryant, his daughter Gigi, and seven other souls is why on earth there was only one pilot on board? Surely Kobe has an insurance policy that REQUIRES him to employ two pilots for safety purposes.

Fog is usually not a problem by simply adding a few hundred additional feet of altitude. Why didn’t pilot Ara Zobayan ask for a higher clearance if fog was the issue? That aircraft has a service ceiling well beyond the level of fog.

A pilot’s primary motto is “altitude is my friend.” Got trouble? Contact air traffic control or announce on a unicom frequency (a universal frequency for all unmonitored aircraft) that you are asking for permission to or are climbing higher.

Deal with the problem. Fly the aircraft. That always comes first.

Forbes and the New York Times both reported that the helicopter company, like most others in the area, did not have the F.A.A. certification for IFR (instrument flight rules) with passengers on board. Most companies avoid adding it because of higher costs associated with training and insurance.

Nonetheless, Zobayan was trained and licensed to fly IFR and could have requested an IFR flight plan, overriding the company limitation. That would mean extra paperwork and perhaps a fine or reexamination by an F.A.A. inspector, all with the consideration that Zobayan was a certified IFR flight instructor.

Had Zobayan declared an emergency, all area air traffic control assets would immediately focus on leading the helicopter pilot and passengers down to a safe landing.

Lots more paperwork and F.A.A. scrutiny would follow but the outcome would likely be a non-event and 9 people would be alive.

The copter circled for 12 minutes above the Los Angeles Zoo where Zobayan was in a holding pattern as other aircraft were processed through the area. He could have requested an upgraded IFR plan from air traffic control (ATC) but asked only for “special VFR” (visual flight rules) which allows for flight with visual contact with the ground, just not the usual three miles of visibility required with regular visual flight rules.

The outcome tells us that he likely did not have visual contact with the ground until it was too late. Requesting the IFR release would allow ATC to call out his heading and descent through obstacle-free airspace, leading him back to a runway at any nearby airport.

This is a portion of an IFR enroute chart. It gives significant information about airports, frequencies, approaches, and much more. In the case of the doomed Kobe Bryant flight, a most significant designation is in large brown font in the upper right corner. The large 10 with a smaller 4 next to it is the MOCA (pronounced mocha), a minimum obstacle clearance altitude. That means that the highest obstacle, whether it is a mountain, television antenna, telescope, or any other land based object, is BELOW that number. In this case, a pilot flying at 10,400 feet above sea level will be clear of all fixed obstacles.

Every IFR level pilot must always be aware of the MOCA in every sector. Just out of view in the upper left corner of the above map is the next MOCA designation of 8,900 feet, or the safest low altitude to assure not running into any fixed object.

The MOCA number tells a pilot that she/he is safe from fixed, ground based obstacles but not other flying objects. So when a pilot is immersed in clouds, fog, haze, smoke, or any other visual limitation, they know to fly at or above that number until otherwise instructed or through the use of collision avoidance technology on board.

Kobe Bryant’s helicopter crashed after a sudden climb to around 2,000 feet and then an altitude dive before striking the hillside. The NTSB would later report that the crash site is “twenty to thirty feet” below the top of that particular hill.

Even though there are other hills in the area, life and death was separated by only 30 feet of altitude.

Why didn’t the pilot ask for permission to climb earlier in the flight when he was in the holding pattern above the L.A. Zoo? That could have at least given the craft a chance to get above the clouds or initiate a return to the originating airport.

The Sikorsky 76B can absolutely fly above 10,400 when necessary (with nearby ATC approval). The FAA controls airspace both vertically and horizontally around airports, military bases, and other specialty areas. Aviation maps show airspace restrictions and limitations and pilots are supposed to map out routes and potential alternate sites in case of trouble.

The term pilot-in-command means exactly that. Consider all possibilities and alternate plans in case the primary flight intention is disrupted for any reason.

Was Zobayan worried about extra time making Kobe’s group late for their basketball tournament? Unaware of worsening cloud cover issues from his current holding pattern toward his ultimate destination? Zobayan had an iPad that provides updated flight weather conditions. A second pilot is helpful in reading weather updates while the other pilot flies the aircraft.

There was no flight recorder on board to give investigators audio or technical readouts of the flight’s exact maneuvers. The youtube video below illustrates the radar movement and radio transmissions to and from air traffic control.

NTSB investigators will have to zero in on the issue of Zobayan’s potential disorientation while flying inside cloud decks. Why was he unable to navigate through a basic overcast? Why did he not request an IFR approach in order to fly through the clouds directly down to a runway at a nearby airport like Burbank? 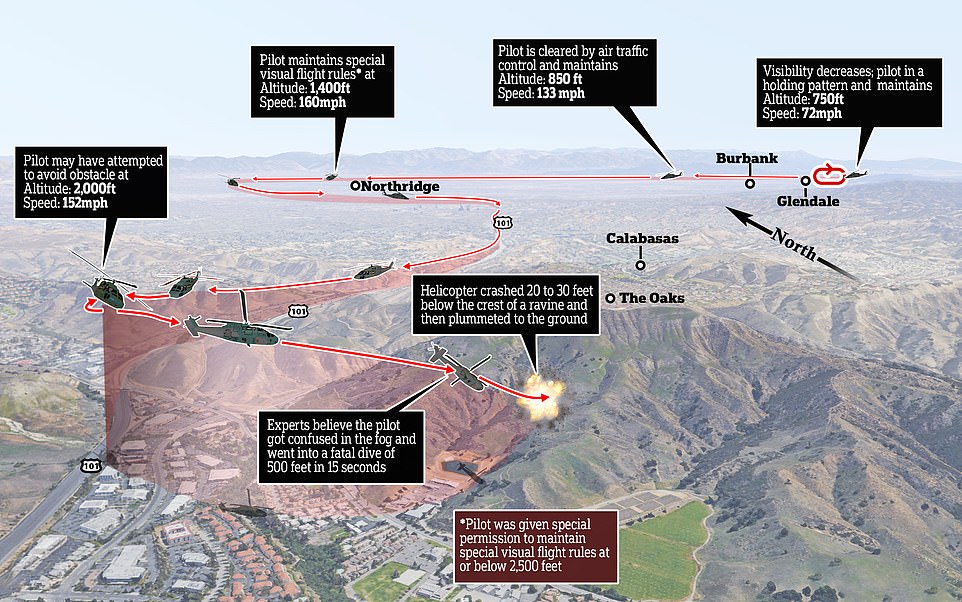 A precision approach to a runway is an electronic glide path that leads a pilot in a straight, obstacle-free descent to 200 feet directly at the threshold of lighted pavement. If the clouds sink below 200 feet or dense fog limits a minimum level of visibility, a go-around flight path is automatically set in the aviation system and the pilot literally goes around again and again until improving visibility allows for the landing.

No request was made for the IFR changeover to access one of these ILS (instrument landing system) precision approaches. If, say, the Burbank airport did not clear up after a few go around attempts, pilot Zobayan could have requested vectors back to the point of origin airport where the weather was better. Or he could ask for vectors to a different airport to attempt a precision landing.

None of these options were apparently requested. The NTSB will ultimately release whatever information they can cull from radio transmissions we’ve all heard, to potential mechanical issues, to the increasingly likely culprit: worsening weather added to a single pilot’s poor decision making.

A second pilot turns this type of situation into a braintrust of combined knowledge and suggestions for a safe remedy to the worsening flying conditions.

Did the lone pilot use the iPad for weather updates along his route, see worsening conditions and then ignore the “better safe than sorry” decision?

Prior to the flight, did Zobayan consider encouraging Kobe and his colleagues to take an Uber or arrive later by waiting until the weather improves? Did he make the Uber suggestion and was rebuffed by an anxious influential customer/passenger? Friends say Kobe was not a high pressure client.

VIDEO: Follow the radar track and radio communications for the helicopter called 72EX (“two echo X-ray”) in each transmission.

Notice that the pilot keeps telling Air Traffic Control (ATC) that he is at a 1,400 feet altitude and the Van Nuys controller reports her cloud overcast is reported at 1,100 feet.

At 3:40 on the youtube video, the pilot claims he is in VFR (visual flight rules) conditions but adds that he is at 1,500 feet altitude, 400 feet higher than the reported overcast level at nearby Van Nuys. The radar indication at that time shows 1,700 indicated on the screen.

That is a discrepancy that will be addressed by the NTSB. Nearby Van Nuys has an overcast reported at 1,000 feet while the pilot claims he is not far away but flying with visual references at 1,500 feet while the ATC screen paints him at 1,700 feet.

Was the pilot immersed in clouds at 1,500 feet and illegally trying to fly through clouds with a special VFR clearance? Was he flying in a “sucker hole” in the clouds and unaware that he was about to become disoriented by IMC (instrument meteorological conditions)? Was he ill-prepared to fly level by using the panel display instead of using visual ground references? Did vertigo impede the pilot’s skills, causing an illogical descent because vertigo was conning him into thinking he was flying level?

All of these issues will be examined by the NTSB in its investigation. 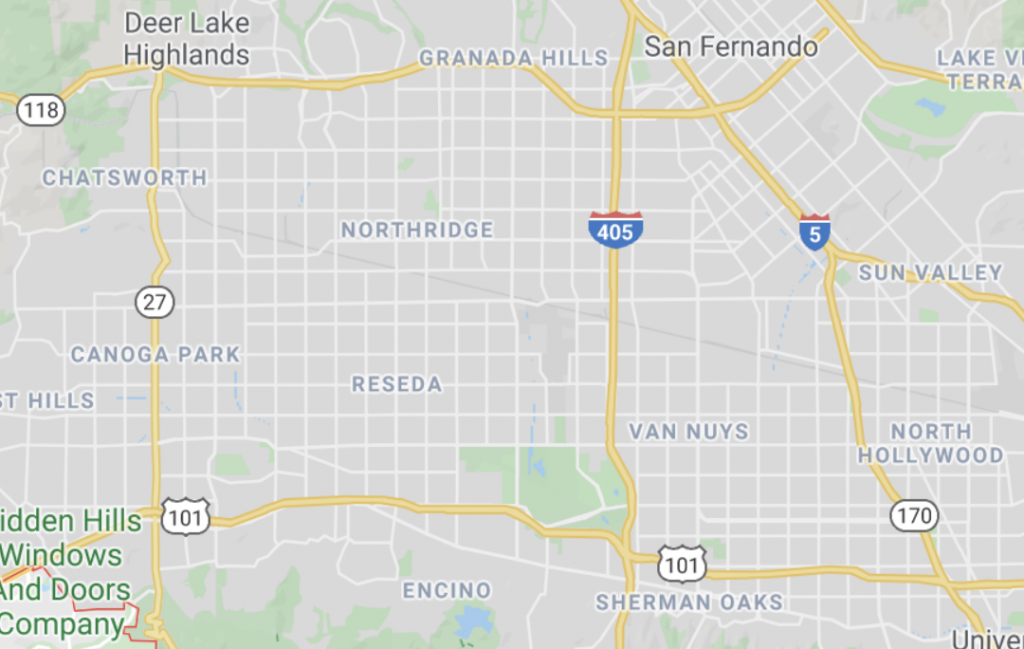 Flying north above Interstate 5, the Sikorsky pilot asks for westbound tracking along Highway 118 followed by a southwest turn toward Highway 101. The destination was near Thousand Oaks, California where Bryant operated a basketball camp. 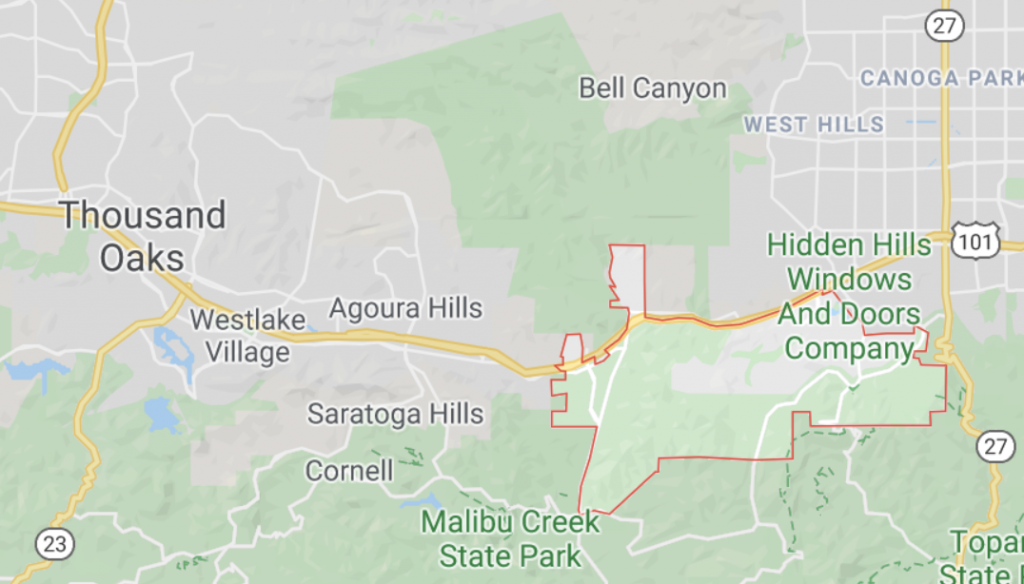 The helicopter crashed into hills just north of Calabassas (within the red outline) on the above illustration.

The pilot’s communications create the presumption that he could see Highway 118 and eventually Highway 101, both visual landmarks necessary for successful “visual flight rules.” Difficult cloud conditions can seduce a pilot into what’s known as “scud running,” or skating just under the cloud deck and around scattered cloud decks.

That’s always a dangerous strategy that should be avoided.

Another school of thought is that a wealthy, powerful influential client subliminally applies mental pressure for a pilot to fly under marginal conditions in a fatalistic case of gotta-get-there-itis.

LIVE: NTSB officials give update on investigation into the cause of a helicopter crash that killed basketball legend Kobe Bryant, his 13-year-old daughter, and 7 others. https://t.co/J5xdRFAfDQ

NTSB officials say they will deliver a preliminary report on the crash within 10 days. The complete report with final analysis will be delivered in 12-18 months.

——-
from The New York Times 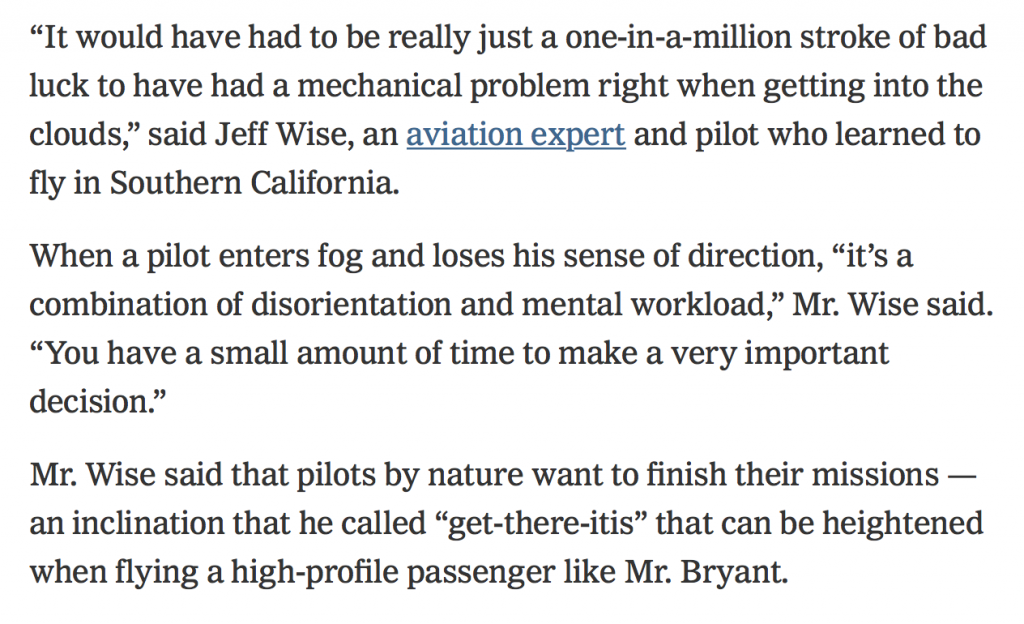 Here is Kobe being interviewed about his regular use of helicopters to avoid Los Angeles traffic.

The story behind why Kobe flew in a private helicopters in LA 💔 pic.twitter.com/0jeB9qCpHd

The following video offers an excellent analysis of the potential helicopter flight problems from a Southern California aviation specialist.

In an unrelated event, here is a report on the 1999 Sikorsky 76 that crashed in Kentucky in similarly foggy conditions.

University of Kentucky medical helicopter that crashed in 1999. It was a Sikorsky S-76 as well. Fog and darkness were factors. Just wondering how such a sophisticated aircraft can fly into the side of the mountain even in fog. @terrymeiners #kobecrash https://t.co/Bqjgy5n2om 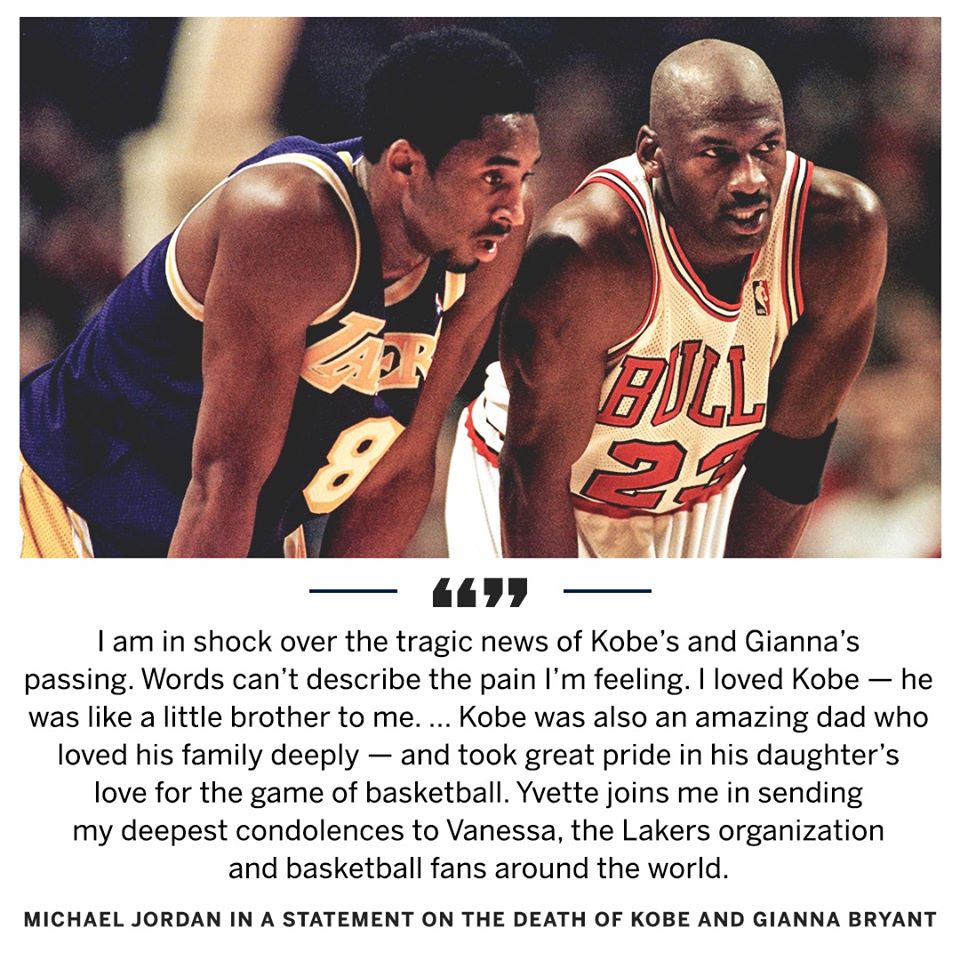