Pretty sure I just became a fan of any team this guy ever faces ever again. pic.twitter.com/svNLFwT25a

All fan bases have horrible moments. This one will live forever in the University of Louisville’s hall of shame, a space more crowded than an Atlanta airport escalator.

Louisville baseball player Luke Smith screamed F-bombs and other derisive words and gestures toward the Vanderbilt Commodores in their College World Series game. It did not end well for U of L baseball or for the image of the school and city that share the name LOUISVILLE.

It was not a case of a frustrated player yelling the F-word at his own mistakes. Smith weaponized many F-words to exhibit his domination and superiority over the opponents. Vanderbilt players were reportedly shouting insults back at Louisville but they were not televised. One of Smith’s meltdowns was shown in slo-mo on ESPN to accentuate the ferocity of the pitcher’s clapback.

Many of Smith’s teammates were quick to defend him, claiming that only athletes who’ve competed in the college world series could possibly understand the pressure.

You ever played in Omaha? I’ll answer that for you, you probably have never even sniffed it. Thank you, I rest my case. https://t.co/sYD9inb1UI

Those are pressure packed life moments where cool heads are required. You’re playing baseball. Screaming F-you is trash behavior for a team that routinely gathers to pray in front of spectators. Many UofL baseball players use Bible quotes on their social media. 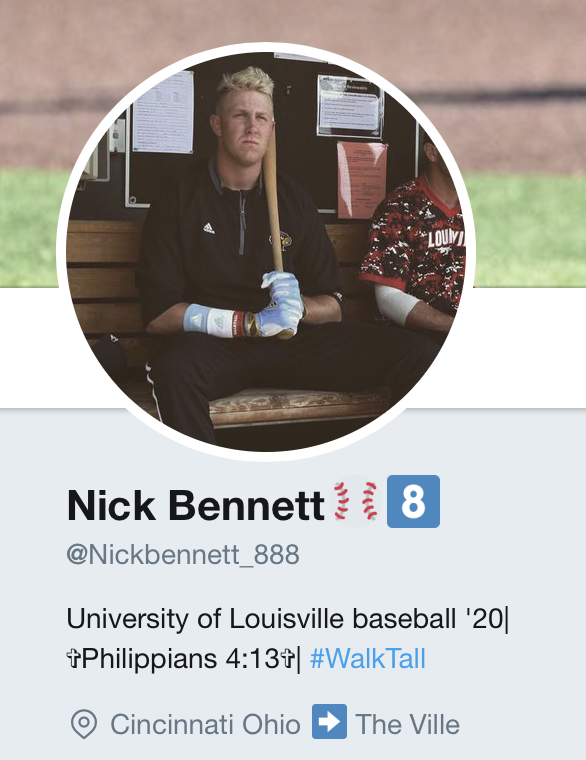 Here’s another important Bible quote: Turn the other cheek.

I’m not mad at Luke Smith. We all make mistakes. We all forget to turn the other cheek.

A Twitter user whose handle references the Fellowship of Christian Athletes organization rushed to defend Luke’s honor for visiting sick kids at the local hospital.

Here is what I KNOW!!@lukesmith1551 is an awesome young man, who got caught up in a moment(sometimes we all do),he later apologized for. He will learn from this BUT He also is guy that goes to children’s hospital the day of biggest game in @LouisvilleBSB history
Love you man!! pic.twitter.com/cjY0iom24a

That’s great, Luke. I’m sure your new hospitalized fans learned some fresh, fierce fighting words as they watched you on TV. So you’ve learned a valuable lesson about setting an example. That’s progress.

As I noted last night, baseball is a game of emotion. But that does not excuse my offensive language during an exchange at the end of a late inning. It was inappropriate and I apologize to all. I have the utmost respect for my teammates and Vanderbilt.

Thanks for owning it, even if you keep retweeting scores of people who applaud your profane outbursts. Mixed message much? 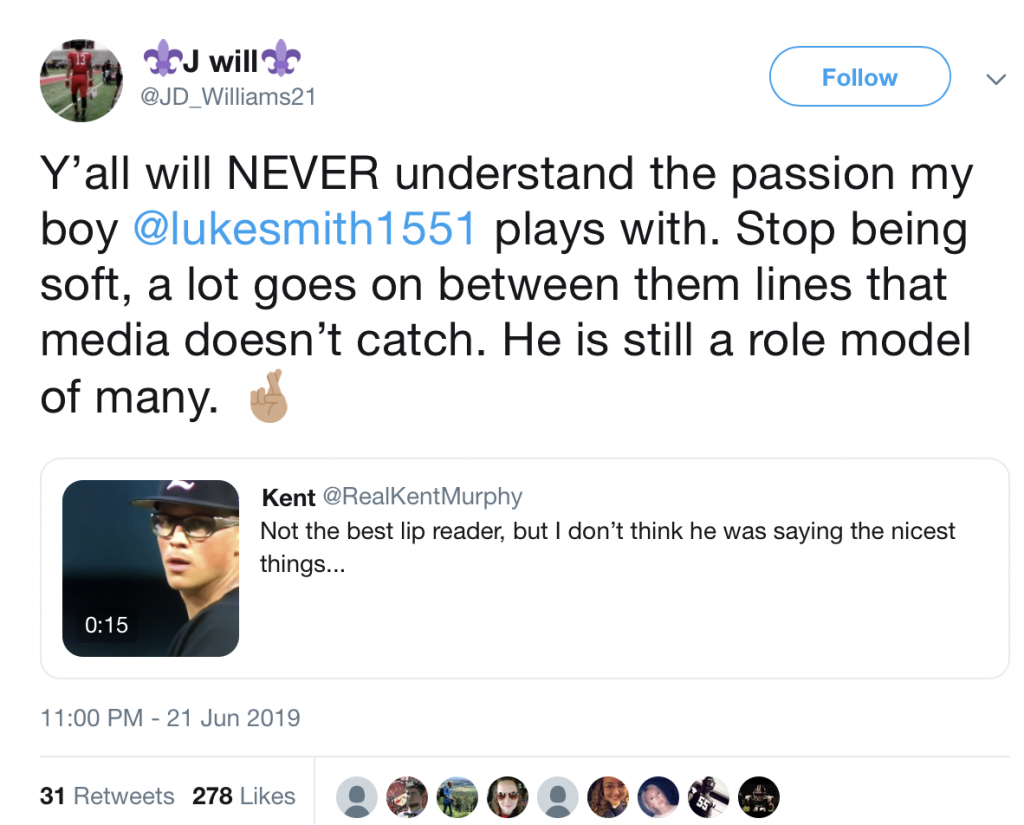 What I find disappointing is the significant number of Louisville fans applauding pitcher Luke Smith’s vulgar, taunting behavior as fierce freedom of expression. I LOVE HIS PASSION, they proclaim. HE’S NOW MY ALL-TIME FAVORITE PLAYER!

Really? You are grownups, right? This is adult leadership in action?

Come on, man. If your rival screamed F-you and GET THE F OUTTA HERE at your beloved players, you wouldn’t say I LOVE MY ARCHRIVAL’S PASSION FOR THE GAME!

Lots of commenters pointed out that Smith’s actions are emblematic of the University of Louisville’s already-sullied reputation.

That’s the biggest problem here. The University of Louisville is still trying to heal from highly publicized scandals involving sex, strippers, recruitment cheating, and other financial improprieties. The FBI could open a satellite office on the UofL campus.

All Smith did was rip open the wound of negative perceptions about the University of Louisville’s integrity. That can’t help a beleaguered university with a still tarnished image. Time heals and this nationally debated misstep slowed the healing process.

Coach Dan McDonnell tends to run a fierce but respectful program based on his own Christian values. But coaches don’t have complete control over their college athletes while they’re in competition.

I expect Coach Mac had plenty to say in private to his players about resisting the urge to imitate Smith in the future.

Louisville fans are screaming BUT ALL TEAMS DO THAT! KIDS SHOW EMOTION! ESPN JUST KEEPS SHOWING OUR GUY BECAUSE THEY PROTECT VANDY AND DUKE AND CAROLINA! EVERYBODY IS PICKING ON U OF L! 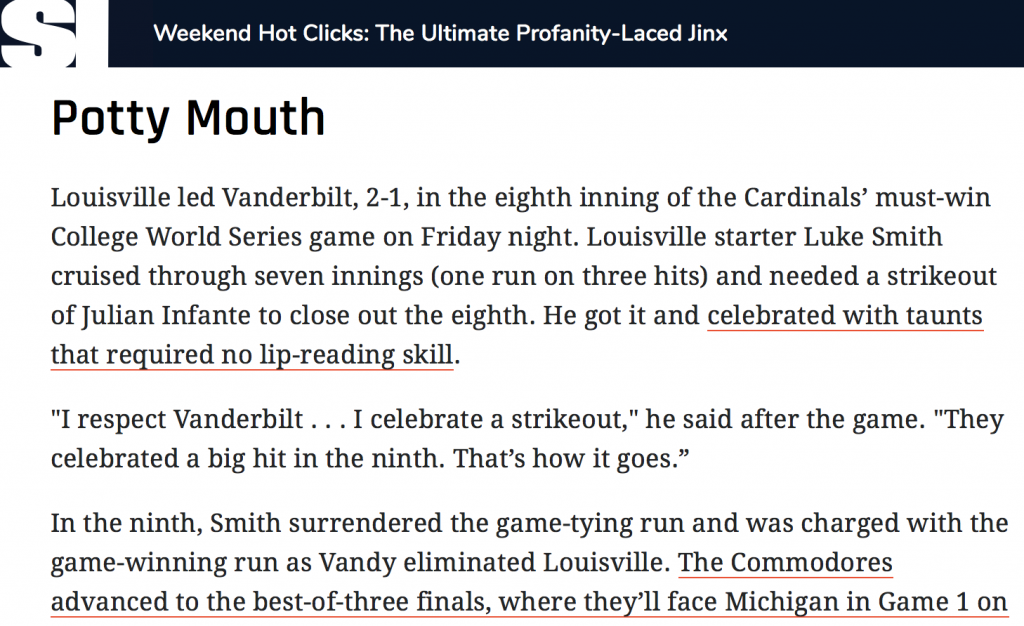 A vast majority of Americans don’t want to watch a schoolboy pitcher screaming F-words on TV regardless of whether children are watching. That’s why reporters don’t begin the evening newscast with “Those f-ing Iranians are at it again!” That’s why employees don’t walk into the Monday morning meeting and blurt “How the f*** is everybody? Did you mother f-ers have a good weekend?”

The F-word is still the big one, and shouting it on TV creates an indefensible position. It’s trash behavior. Period. 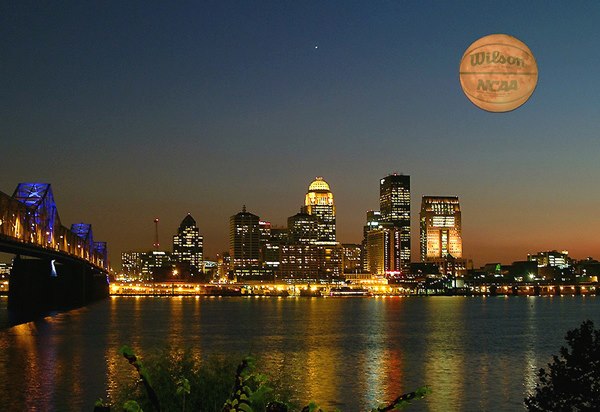 It doesn’t matter what other teams do or don’t do. Our job is to advance the image of Louisville the city and Louisville the university. Let others worry about their own. A player wearing LOUISVILLE across his chest just punched all of us in the face on national TV. ESPN didn’t show other schools looking deranged and profane. They showed Louisville. So now it’s our problem.

Other schools aren’t saddled with Louisville’s recent rap sheet. UofL needs to be on its best behavior to allow healing and provide examples of exemplary achievements attached to the school.

When you watch Smith sneer F-you, he was kicking us back down the hill of respect that we’ve been climbing of late. Smith’s tirades should have resulted in ejection. A different Louisville pitcher got tossed recently for saying THAT’S HORRIBLE!

Had Smith’s tantrum occurred in an NCAA football or basketball game, he would have definitely been ejected, a quick-to-fade story. But this video will deride Louisville for a long, long time.

RULE ONE: If you’re going to spew smack talk, back it up.

RULE TWO: Shut your cake hole. Win the game and celebrate with your teammates. If you bark and get bitten by defeat, you deserve the blanket of humiliation. So just shut up. Problem solved. 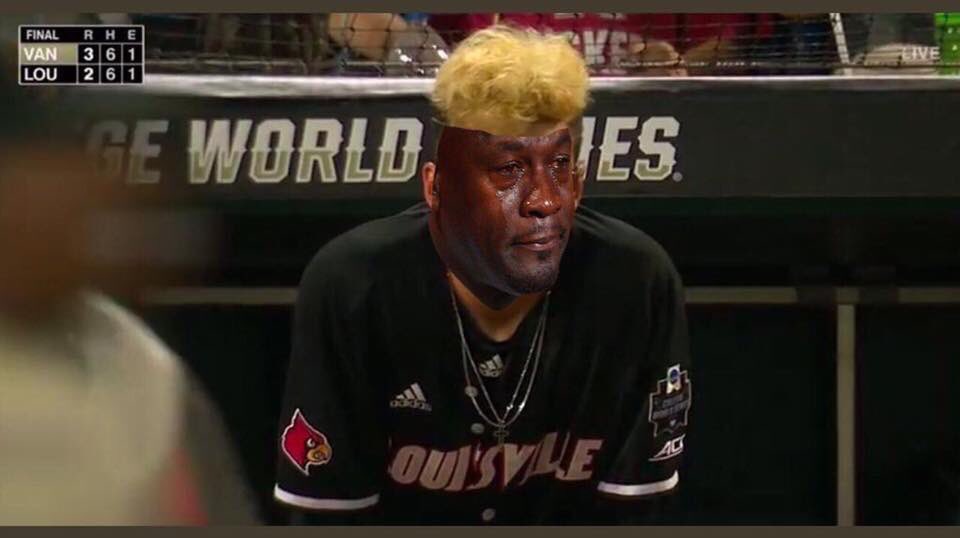 The hypocritical take on this meltdown is THIS KID IS MY FAVORITE! HE CAN PLAY ON MY TEAM ANY PLACE, ANYTIME!

If your kid acted this way and you have any sense of decorum, you may not come out of the stands to spank him but he would know he’s in trouble when he gets home. If that’s not your reaction, your parenting lacks community empathy. By tolerating vulgar, threatening behavior from your kid, you are foisting another undisciplined punk onto society. Society isn’t always so kind when whipping your punk kid into shape.

Trash behavior is at the core of nearly every societal problem. Subpar parenting is the root cause. No decent parent cheers a college kid screaming F-YOU at opponents on national TV or in private. If that’s your jam, your dirtbag kid reflects your own dirtbag persona. Do all of us a favor and go live in the woods.

Every team needs a Luke. Relax perfect people both teams were jawing they have history. College baseball players share scholarships yes that’s right they pay and play. I love this team and I would hire Luke Smith tomorrow. pic.twitter.com/COEZRzowp0

Tony Vanetti is just doing showbiz grandstanding here for Twitter clicks. I know him well and he would never applaud either of his children for acting out like profane, menacing bullies. There would be intense discipline and the acting out would cease.

If you’re raising children and delighted that they act this way, both of you are emotional morons. Trash leadership produces trash results. Menacing debasement of an athletic opponent only spotlights inadequacy.

You know what really impresses opponents? When you beat them. As Luke Smith continued bellowing and gesturing dismissiveness of Vandy, they used his immature acting out as fuel to regain the lead and win the game.

Smack talk flows from both directions. When an athlete from a rival school curses and exhibits threatening behavior, he is quickly labeled a thug or an unhinged maniac by the same people who defend their own team’s “animated” behavior.

Ask a Louisville fan if these UK players are being dignified or are they cruel, on-the-take, NCAA violating punks?

Kentucky fans know misery. They talk all kinds of garbage and often have to eat their words. But those are short term fan problems. No one remembers smack talk among loading dock workers.

A student athlete shown in televised replays exhibiting hateful, arrogant, childish behavior dishonors an entire fan base. The school, the ticket buyers, the donors, and those who wear the team gear all take the hit.

Same goes for former players who run afoul of the law or violate community standards.

An employee in a marked company car creates negative impressions about the company if he is speeding, driving erratically, refusing to allow others to enter the lane, etc. A foulmouthed, menacing kid wearing a school’s jersey is similarly tarnishing a brand name.

The name on the front is the mothership. Protect its value.

READ: THE TEN HARDEST THINGS ABOUT BEING A KENTUCKY WILDCATS FAN

Smack talk is a treacherous device. One team wins the game and validates their smack talk. The losing team, in this case Louisville, is saddled with the hurt of the loss and the embarrassment of spewing empty smack talk.

But they’re all petty, undignified braggarts or sore losers who should have the decency to congratulate the victor and offer encouragement to the defeated. You see it in golf and tennis. You rarely see it on other fields of play.

The Louisville pitcher stared him down and let him hear it 😳 pic.twitter.com/qrnX1Z0EGq

LESSON: If you must trade in this childish derision, save the smack talk for after the game’s conclusion. Or better yet, celebrate with teammates and then shake hands with opponents and wish them luck in their future endeavors.

Dignity never goes out of style. Except when the Supreme Court green lights a clothing brand named FUCT.

UPDATE: COACH MCDONNELL AND VINCE TYRA HAVE A COME-TO-JESUS MEETING WITH LUKE SMITH

A coarsened culture is a weak culture. Parents need to lead, not applaud and encourage trash behavior.

There’s not even one F-word included. Fancy that. 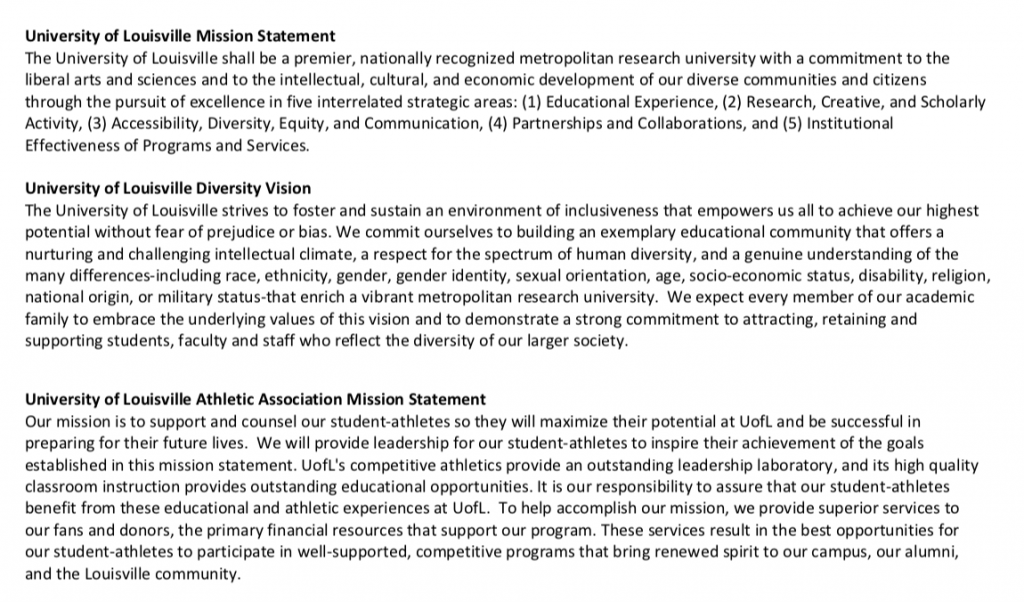 Why restaurateurs hate your cell phone

Why would an old man mass murder concertgoers?

Mugging for the camera