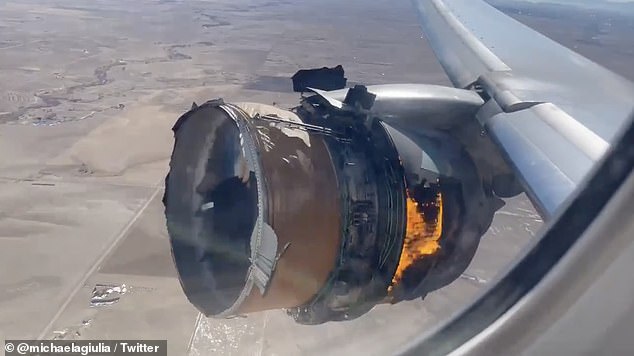 United Airlines flight 328 took off from Denver International Airport and soon suffered a catastrophic engine failure. Just after takeoff is the most challenging time for flight crews because the aircraft is heavy, low, and slow. Maneuverability is more challenging and higher altitude allows for more strategy time.

It was a uncontained engine failure, meaning that the outer protective shell did not contain all the splintered engine parts within. Debris from the exploded engine and its protective cowling rained down on suburbs northwest of Denver. No one on the ground was injured.

Here’s video of the burning engine as the plane was routed back to the departure airport.

There were 231 passengers on board and 10 crew members. The crew brought the aircraft back to Denver without incident. No injuries to anyone.

The United crew did a masterful job of turning back to the airport and making a smooth landing on one engine, a regularly practiced flight training drill. Air Traffic Control (ATC) also illustrates how professionally calm but urgent communication keeps the situation under the least level of stress possible.

from The Denver Channel

KING5 in Seattle, home base to Boeing Aircraft, had an expert explain about the rarity of this type of engine incident

When the Denver air traffic controller asks the question about “how many souls” are on board, that is a standard procedure so that in the event of a crash, rescuers know how many bodies they are trying to locate. The United pilot did not answer the question but instead asked about the return flight path.

Thanks for the love and support for a career I cherish