The founder of Papa John’s pizza company admitted using the N-word during a recent media training exercise. The slur was reported on Forbes.com and “Papa John” Schnatter was quickly removed as chairman of the Louisville-based company.

The University of Louisville then removed Schnatter from its board of trustees, scrubbed his name from the business school, and Papa John’s pizza no longer retains naming rights to the Louisville football stadium. Papa John’s immediately bleached Schnatter’s image from all of its marketing materials.

The University of Kentucky then announced it would remove the Schnatter name from its business school, and Schnatter’s alma mater Jeffersonville High School scraped his name off the field house where the pizza baron donated $800,000 for upgrades. 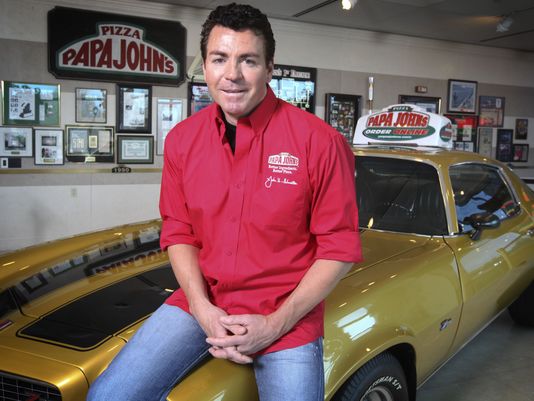 At the end of his brutal week, John Schnatter spoke exclusively with me in a 28 minute freewheeling interview.

Schnatter claimed that he “was pushed” to say the N-word by the company conducting the training exercise. “I should have been more sensitive. I wasn’t raised that way. I did it. I own it. And I’m sick about it.” He added that he feels “horrible” for the Papa John’s “employees and franchisees who did nothing wrong.”

In response to our interview, Papa John’s directors are demanding that Schnatter cease all media appearances. They even took the extraordinary step of preventing him from using his office space within the company headquarters.

Schnatter then wrote a letter to the board saying it was a mistake to resign his chairman position. 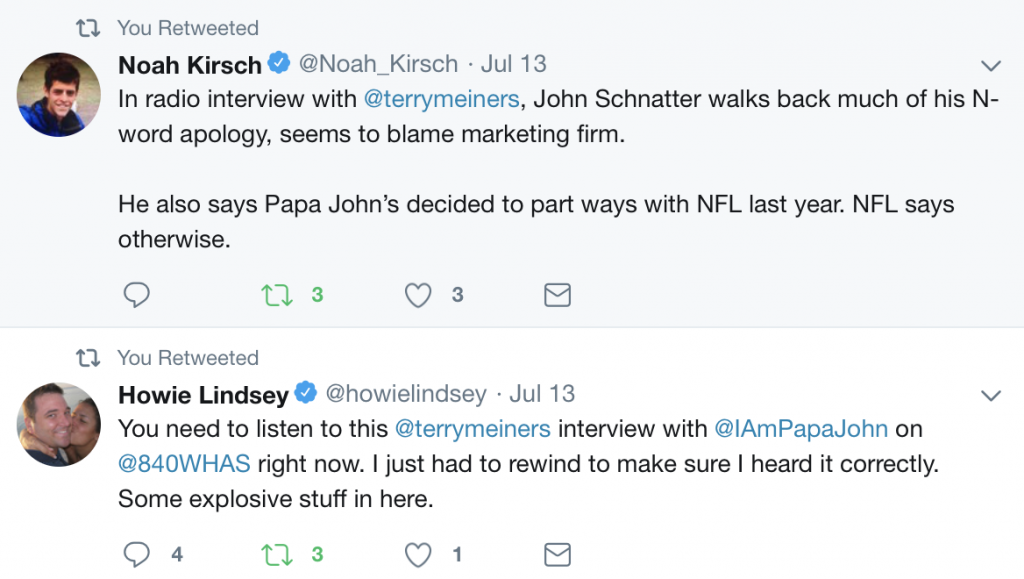 In our WHAS Radio interview, Schnatter also claimed that Papa John’s “fired” the NFL, not the other way around, after his 2017 comments complaining about African American players protesting the national anthem. Rival chain Pizza Hut is now the official pizza of the NFL.

Schnatter chafed at the question about whether his family would continue living in the Louisville area or would flee the hot cauldron of controversy.

In a subsequent interview with WLKY-TV, Schnatter claimed that the Laundry Service marketing firm that conducted the media training tried to extort him “to make it go away.” The firm originally asked for $1 million for services then upped the price to $6 million. Schnatter claims a Laundry Service exec said “If I don’t get my f-ing money, I’m going to bury the founder.”

When I asked John Schnatter if he would sue the marketing firm that leaked his racist gaffe to media, he didn’t mention extortion. “I don’t like litigation. I don’t like lawyers. I don’t like what (Laundry Service marketing) did.”

Now Major League Baseball execs urged Schnatter to stay away from Tuesday’s MLB All-Star game. Multiple teams have suspended or ceased their promotional deals with Papa John’s, and the MLB league-wide promotion of Papa Slams has been shelved.

Others think he needs to disappear entirely.

I asked John Schnatter about the firings of Tom Jurich & Rick Pitino. (1) Jurich says he will respond after the September @60Minutes story. (2) Pitino says Schnatter lied, “he called Tom every week trying to get him to fire me.”
Pitino no holds barred book drops in September. 1/2 pic.twitter.com/FHXEpsP0S7

2/2 Pitino on Schnatter’s current conundrum: “U know Terry I hate seeing any person suffer – it’s not something I enjoy” Says his book “will expose all 3” (w/o specifying who) & “I’m not kind to” @GovMattBevin pic.twitter.com/XsFZYJVHPY

For his part, Schnatter tells me he is focusing on the philanthropic work he has done and he plans to continue working for the betterment of his community.

One day after our radio chat, Schnatter wrote an impassioned letter to the Papa John’s board to recap his claim that he was coerced into the N-word discussion, the makings of an extortion attempt, and that he shouldn’t have resigned before the board conducted a complete investigation.

He’s now hired Los Angeles attorney Patricia Glaser, who has managed cases for Harvey Weinstein and Paula Deen, to handle his forced departure from Papa John’s. She has declared that Schnatter will not go quietly.

Cards get their jaws jacked in the NIT, the Beasman suggest a Toys R Us strategy to go out of business

He won “The Championship of Men”