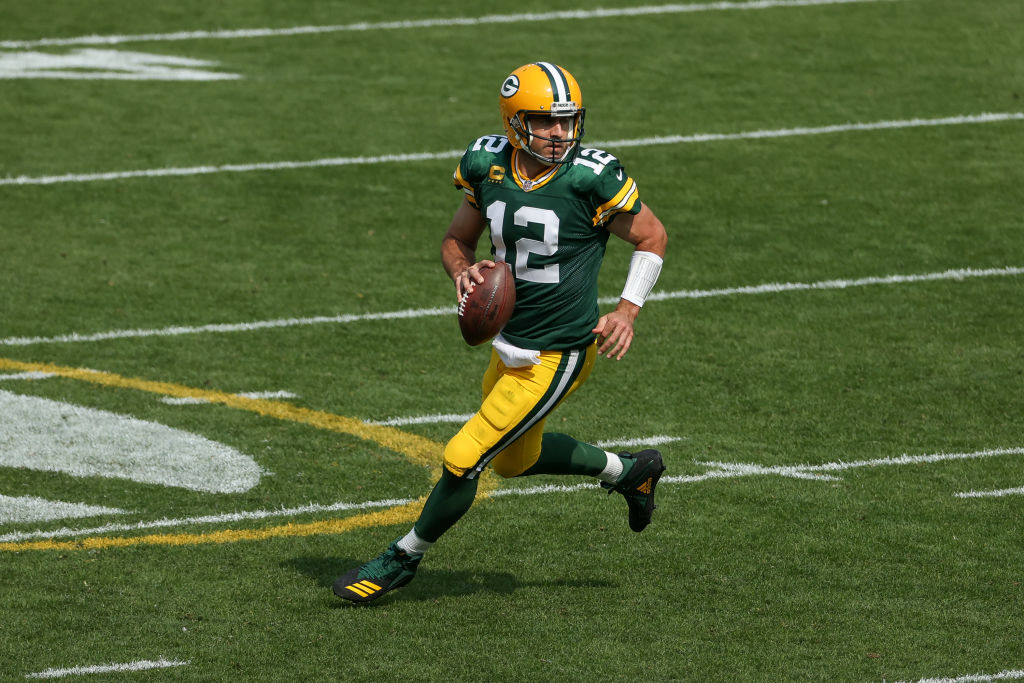 Green Bay Packers quarterback Aaron Rodgers appeared on late night Sportscenter with his longtime friend Kenny Mayne. It was mostly a chance for Rodgers to celebrate Mayne’s quirky legacy on his final ESPN broadcast. The NFL MVP gushed over Mayne’s clever swerves from traditional sports broadcasting to add a dimension of snark and cynicism to ESPN’s signature show.

Rodgers fielded tough questions about his sartorial choices at the Kentucky Derby and his upcoming wedding. Oh, and that little matter about whether Aaron Rodgers will show up for work in Green Bay finally popped up at 7:23 into the interview.

Aaron is keeping it coy but it sounds as though he wants to play elsewhere.

The problems for Rodgers are (1) he has a contract through the 2023 season and Green Bay could just let him sit. (2) Rodgers is 37 years old so his skills are likely beyond their peak. (3) He’s won exactly one Super Bowl in 16 seasons but is acting as though he’s won several.

In the ESPN interview, Rodgers claims that he is not upset about Green Bay drafting another quarterback in the 2020 draft, showers praise on fans and legendary players from decades earlier, and conspicuously avoids mentioning the team management.

Rodgers is indeed the MVP for a third time but any star football player relies on teammates to block, catch passes, run through gauntlets, defend against the opposition, and score points through kicking. Any MVP has the right colleagues working FOR him. Rodgers has been blessed to have superior talent around him in Green Bay, a testament to the thoughtful strategies of management.

So is Aaron Rodgers making a mistake by holding out to be traded at his advanced age? Absolutely.

Maybe he thinks he’ll get the full-time hosting gig at Jeopardy. Highly unlikely. He’s a smart and charming guy but his low key delivery seems to lack the necessary energy for that job. The Nielsen ratings were OK when Rodgers guest-hosted the show.

Plus, Aaron lacks Alex Trebek’s natural ability to pull insightful comments from contestants. Rodgers is witty and telegenic but a bit too guarded to emote compassion.

So football is still on his forward path. Rodgers will either choke Packers management into giving him the biggest contract ever, which is undeserved in the era of seven-time Super Bowl champion Tom Brady, or Rodgers will wind up playing somewhere else as his NFL career fades to black.

San Francisco 49ers legendary quarterback Joe Montana won all four of his Super Bowl appearances. But wait…after he won big for the 49ers his injuries led to Steve Young getting the snaps. Montana ultimately asked to be traded and wound up with the Kansas City Chiefs. (The NERVE of the 49ers management to build for their future with Steve Young! Montana will show those 49ers it was all about him and not Young and the 49ers as a team! You just watch and see)!

Montana played two season in Kansas City and led the franchise to an AFC Championship game. Which he lost.

Brady will always be the GOAT. Many fantastic quarterbacks like Montana, Young, Troy Aikman, and Terry Bradshaw have at least 3 Super Bowl victories. Bradshaw recently took Rodgers to task, calling him “weak” for being irked by Green Bay’s choice of a future quarterback in the 2020 draft. Bradshaw thinks Green Bay management should call Rodgers’ bluff.

Meanwhile in Hawaii, @AaronRodgers12 is having a great time with fiancé Shailene Woodley and actor Miles Teller. pic.twitter.com/xd9T3d1KDb

Unless Rodgers returns to play for Green Bay with all of the Packers’ momentum and great athletes already signed, he’ll never win another Super Bowl.

Hardly on par with any of the other quarterbacks listed above. One and done is not a front row achievement. Get over yourself, Aaron. Show up for work. Or don’t.

My guess is that Aaron will likely go elsewhere and eventually realize that he had a great situation but threw it away over his inability to see that teams constantly build to retain greatness.

Father Time is the only guaranteed dominator. Aaron Rodgers is becoming more acquainted with him every hour of every day. He has great flow with his current Packers teammates but would have to develop an entirely new culture elsewhere.

The boy don’t care. His widdle fee-wings was hurted when the meany Packers bosses planned for the ever emerging future.

In Jeopardy parlance, we’ll give the clue and then answer in the form of a question.

The NFL quarterback who let his fragile ego ruin a stellar legacy in Green Bay.

Who is Aaron Rodgers?

Mikey Bolts is Happy and Roomie is Cray Cray